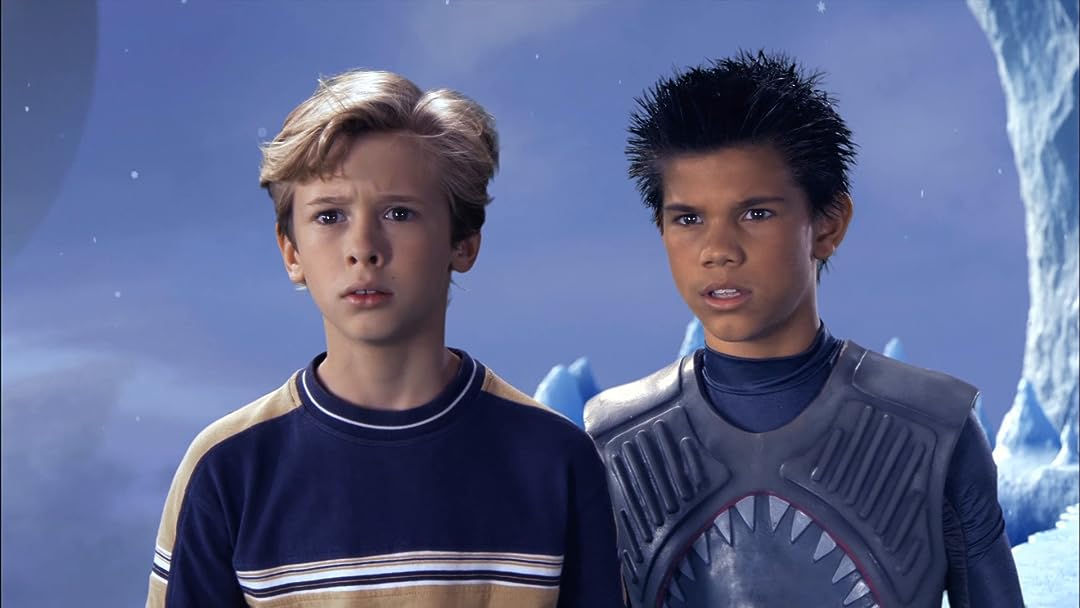 The Adventures Of Shark Boy And Lava Girl

MOMReviewed in the United States on September 18, 2018
5.0 out of 5 stars
Fun movie for kids
Verified purchase
Classic, rare movie that is hard to find in stores. My kids love it.
Dvd comes with one disk, which can play as 2D or 3D. Does not come with glasses. To watch it without 3D, just select 2D when you are in the startup screen.
19 people found this helpful

Amazon customerReviewed in the United States on April 25, 2019
4.0 out of 5 stars
Both 2d AND 3d options!
Verified purchase
Movie worked great, but I didn't realize it has a 3d option and was a but upset at first but thankfully someone had reviewed it saying theres a 2d version in the main menu! So I was able to switch it just fine, I wouldve returned it if i hadn't found that info. And now that i know we have both options i like that a lot because we can get those paper 3ds and my kids can enjoy that version too! I wish the description wouldve made it very clear theres both,but I figured it out so it's all good now.
5 people found this helpful

JessicaReviewed in the United States on September 26, 2015
3.0 out of 5 stars
Enjoy this for what it is...
Verified purchase
.. And don't sweat what it coulda, shoulda, woulda been. This is a kid adventure, written by kids I'm told, for younger kids. Ours really enjoyed it I think because they related so easily to the themes: dealing with a bully at school, escape into a dream world, parents who love you but have tough stuff to deal with too.

Special effects are weird at times. The 3D seemed a bit lame but the story line was really good enough that the film didn't need to be CGd as much. It moved at a good pace, was imaginative and ended happily-yeah! Everyone finds their place in the world, including SB and LG, both of whom mature into responsible superheroes. If nothing else watch it for the cast; many of these kids are stars now!

A caution for really young kids-some of the images and situations might be a bit scary. School age kids should have no problem.

Olivia HollandReviewed in the United States on July 29, 2021
5.0 out of 5 stars
So cool it made me drool
Verified purchase
It might be cheesy, but it’s one of my favorites. Dream dream dream dream dream dream. Go to sleep you little bleep.
2 people found this helpful

Lisa T.Reviewed in the United States on July 10, 2013
5.0 out of 5 stars
A Classic Flick
Verified purchase
First of all this is a fantasy in the tradition of Wizard of Oz, Never Ending Story & Alice in Wonderland. Its a story about a journey in the mind of a child trying to deal with his life. He goes inside his own mind (in a very creative way ) to deal with his inner world and is encouraged to 'dream awake' and make his outer world the way he wants by changing his perspective. Those are concepts worth thinking about at any age.
With vivid visuals of following the 'train of thought' , floating down the 'stream of consciousness' and not to mention the brain storm of real brains , its very clever, especially compared to the old ' follow the yellow brick road & 'if I only had a brain'which adults have been watching for generations.
So suspend your disbelief and dive in and you may find this silly little film can actually teach you something while its amusing the heck out of your kids.
5 people found this helpful

Only-A-ChildReviewed in the United States on October 18, 2005
4.0 out of 5 stars
Advice for Those Older than the Target Audience
Verified purchase
Age six to ten audiences usually get the short end of the stick when it comes to major feature films. Although technically films like "Elf" and "Toy Story" target this demographic, the marketing people insist that these productions incorporate adult elements and humor to expand the target audience and maximize attendance; these are called "family films" and the additional elements take much away from the identification experience that children most enjoy. The only escape from these multi-generational things are preschool stuff like "Clifford's Really Big Movie" and "Muppets from Space" which no one in the 6-10 group would admit to watching, let alone liking.

Then along comes Robert Rodriguez with "The Adventures of Sharkboy and Lavagirl", a film that gives 6-10 audiences exactly what they want without even the slightest attempt to appeal to older viewers (well maybe middle schoolers will get crushes on Sharkboy and Lavagirl). Since this is a new animal to most critics, it gets blasted for not being what they wanted it to be, a family film. And teenagers complain that it is not as good as "Spy Kids", a Rodriguez film that not only targeted a broader audience but which most of them watched several years ago when they were preteens. To be fair, while Rodriguez did not make "The Adventures of Sharkboy and Lavagirl" for 14 year olds who saw "Spy Kids" 4-5 years ago, the distributors did attempt to market it to those audiences-who are now angry about being misled although I think the trailer gives a pretty accurate representation of the film.

So don't let the negative reviews and comments discourage anyone in the target audience from seeing this film. There are plenty of positive reviews and comments from critics who have a clue about Rodriguez's intentions and from the viewers in his target audience. There will be a lot of Sharkboys and Lavagirls out trick or treating this year and the film will become a classic to those who first see it at a young age.

Which is not to say that only those in its target audience will enjoy the film, it is a fun children's tale that might be described as a cross between "The Wizard of Oz" and "Yellow Submarine". In one respect it is better because almost all the actors are kids; Rodriguez understands that a lot of adult characters in a children's film is a less than zero situation. And it has very good messages: emphasizing the value of dreams, how dreaming better (i.e. unselfishly) increases that value, and how working to make your dreams come true maximizes that value (the young hero's name is "Max"). Plus Sharkboy and Lavagirl are friends who demonstrate a willingness to risk their lives to save each other. It is entertaining just to watch kids (both girls and boys) get into it.

Speaking of less than zero, the advantage of seeing this on DVD versus in a theater is having the option to watch in 2-D. The 3-D version subtracts instead of adding, as much of the brightness and life of the film are lost to the crude 3-D cardboard glasses process they used. The only useful thing about the 3-D (other than a mildly interesting visual effect for those who have never experienced it) is the interactive aspect; as signs flash on the screen telling when to put on and take off the polarizing glasses. The DVD contains both versions and the 2-D one is first rate.

Then again, what do I know? I'm only a child.
11 people found this helpful

Max PowerReviewed in the United States on May 29, 2013
5.0 out of 5 stars
Great kid's movie.
Verified purchase
My children love this movie and go back to it time and time again, so I ended up buying it. It's quite fantastical with oer-the-top special effects, almost garishly so like many of Douglas Rodrigez-directed movies are, but works because of the outlandish conceit. A boy wrote a story, based on dreams that he reads to the class for a writing project. He is ridiculed for it and the adventure begins. The predominant themes are similar to other children's movies: believe in yourself and you will be rewarded, the hero has undiscovered talents that make him indispensible, a semi-surprise villian mastermind that turns out to be misunderstood, the hero has to save the day wihout use of his special talent but something that all children are capable of, etc. The kids are endlessly enthralled by the story and I'm sure will watch it repeatedly for years to come.
2 people found this helpful

MilehikrsReviewed in the United States on July 28, 2013
3.0 out of 5 stars
DVD inside was 3-D version
Verified purchase
My daughter loves this movie and we have it recorded, but wanted it without commercials. But beware -- this is a 3-D version! It doesn't say that anywhere on the box or in the item description. It looks really funky unless you have 3-D glasses, which, of course, we don't. We've already watched it (that's the only way to find out that it's 3-D), so we can't return it. Really disappointed with the lack of disclosure. As for the movie itself, it's campy and terribly over-acted, but contains good messages and my kid loves it. UPDATE: Thanks to other reviewers here, I learned that you can set this movie to 2-D from the main menu. (Hey, I'm a smart person, but I never noticed that option!) The effects are just as cool in 2-D.
See all reviews
Back to top
Get to Know Us
Make Money with Us
Amazon Payment Products
Let Us Help You
EnglishChoose a language for shopping. United StatesChoose a country/region for shopping.
© 1996-2022, Amazon.com, Inc. or its affiliates