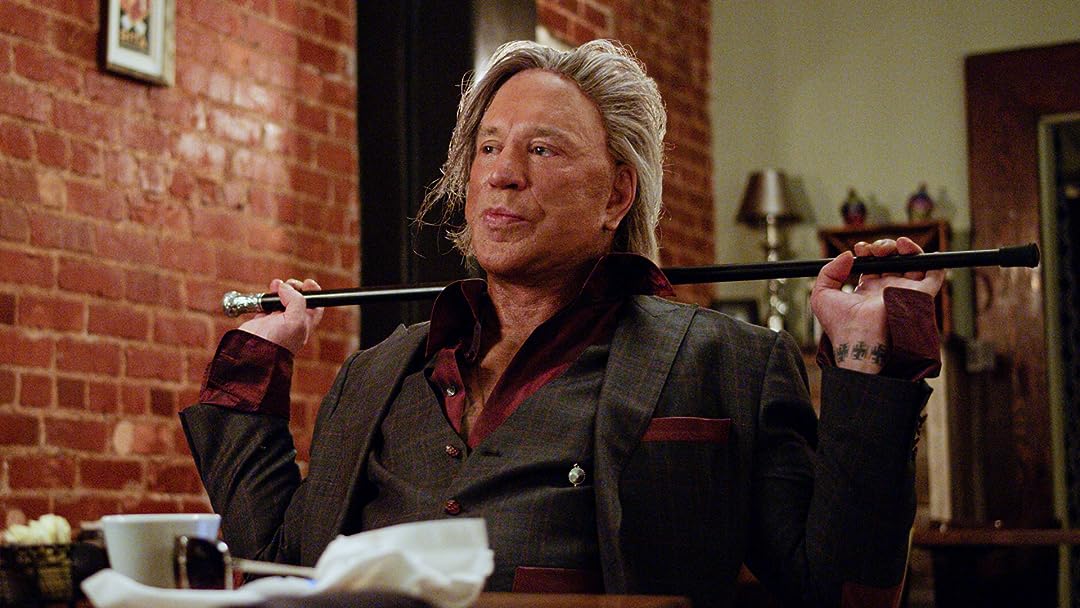 (521)
5.21 h 34 min2021R
Mickey Rourke and Thomas Nicholas star in this gritty, intense urban thriller about a ride-share driver (Nicholas) who seeks bloody revenge when his sister is kidnapped by a ruthless mob boss (Rourke).

toddReviewed in the United States on March 10, 2021
1.0 out of 5 stars
One of the worst movies ever
Verified purchase
How did this movie get and 86 rating on IMDB? The trailer looked good. Given the rating and the trailer I took a chance and ordered this piece of garbage. The acting was terrible. Mickey Rourke sounded like a Frankenstein’s monster. He mumbled throughout the movie and it seemed like he made up his own lines. The main character as played by Thomas Nicholas from American Pie fame proved why we have not seen much of him since that film series. He looked like he was ready to cry in every scene. I don’t know how big he is but the amount of people that he took down with a tire iron was not remotely believable. The violent scenes were clearly computer generated which further cheapened this movie. Additionally Lou Diamond Phillips plays the role of Thomas Nicholas’s character’s parole officer and whoever wrote his lines should be ashamed. Don’t get me started on the female characters . None of them could act their way out of a paper bag.
Arguably this could be one of the worst movies that I have ever seen. I have no idea how this piece of garbage was ever funded.
9 people found this helpful

JonBReviewed in the United States on March 20, 2021
5.0 out of 5 stars
Hats off! I was on the edge of my seat!
Verified purchase
Wow! I was blown away within the first first blow, I can't say anymore I don't want to spoil it or give anything. The acting from all actors were top notched they brought their acting chops and the director brought his. I was on the edge of my seat waiting for the next shoe to drop. I hope there's a sequel like John Wick. Speaking of that movie that's how I felt for John Wick when it first came out. Adverse is a journey through the lead actors eyes and Thomas Nicholas sparks that flame. It's been a long time since we had a real good gangsta drama, so my hat goes off to entire cast and crew members for navigating a smash hit movie in the middle of a pandemic. No one has been able to do it thus far until Adverse. Please please Adverse2!! Where's the dog?
4 people found this helpful

Concerned BuyerReviewed in the United States on April 5, 2021
4.0 out of 5 stars
Decent enough flick...Just annoying one must pay a $5.99 rental fee for it, on top of PRIME.
Verified purchase
I like the movie but feel that this content should be included with Prime membership. The acting by Nicholas and Rourke was great, and frankly, only a few parts were weak in the overall acting picture. Production and Direction were fine but not spectacular. Overall, albeit as violent as the picture is, it kept my attention throughout. I would recommend to anyone that likes this type of movie despite the surcharge. I have paid for much worse content in the past, so with that in mind, it is worth it IMO.
3 people found this helpful

MWReviewed in the United States on March 19, 2021
4.0 out of 5 stars
Curiosity turned to interest
Verified purchase
We were very excited to see Adverse. The trailer had our curiosity, the movie had our attention.
The twists in the movie were expected, yet still had us on the edge of our seats. Lou Diamond Phillips brings his stellar acting skills to this film. While a small role, he made it big and filled with passion. Sean Astin playing the very small roll of a ride-share manager was great, though it minimized his acting skills. Thomas Ian Nicholas made the lead role not only his, but believable, and his raw emotions are seen through out the film. Mickey Rourke, playing a kingpin, it was almost as if the role was written specifically for him. He really brings the quiet and subtle fear that makes one a little nervous about what will come next. Cannot think of anyone better to fit the role.
There are some dry spots in the dialogues and scenes, but the veteran actors really bring this psychological-action film to a great height.
Extremely happy to have bought the film. Already added to the watch again list!

ChrisReviewed in the United States on March 17, 2021
1.0 out of 5 stars
Wait till it's in regular tv. Not worth paying for.
Verified purchase
No sure why this movie got all the hype. It's a long drawn out story that drags. Want my money back it's so bad.
4 people found this helpful

Casey WoodReviewed in the United States on March 15, 2021
1.0 out of 5 stars
WTH Did I just Watch?!
Verified purchase
I have never been so upset about waisting $6 in my life! The worst acting... Terrible storyline... Do not waste your money! Wow! I'm so angry
5 people found this helpful

Amazon CustomerReviewed in the United States on March 20, 2021
5.0 out of 5 stars
An beautifully intense experience
Verified purchase
This story had my attention from the start. The characters were layered and the performances were on point. Well there may have been a few sub par smaller parts, but that always happens in films. I'm talking about the main roles. I found myself caring about the main antagonist. I wasn't sure if that was due to Mickey Rourke's performance, Thomas Nicholas' performance or just the overall story.

In any case, the composition of the camera angles was always interesting. I really loved the arial shots of Los Angeles. The end of the film was a little too bloody for my personal taste and I had to look away a couple of times. However, the violence was motivated by the characters experience. I highly recommend this film. Especially if you like dark, serious and intense films.
3 people found this helpful

Brian RiggsReviewed in the United States on March 13, 2021
1.0 out of 5 stars
Waste of $$ and time
Verified purchase
This is one of the worst movies I ever watched and if it wasn’t for the money I spent on it I wouldn’t of watched it at all. DON’T WASTE YOUR TIME AND MONEY!
4 people found this helpful
See all reviews
Back to top
Get to Know Us
Make Money with Us
Amazon Payment Products
Let Us Help You
EnglishChoose a language for shopping. United StatesChoose a country/region for shopping.
© 1996-2021, Amazon.com, Inc. or its affiliates