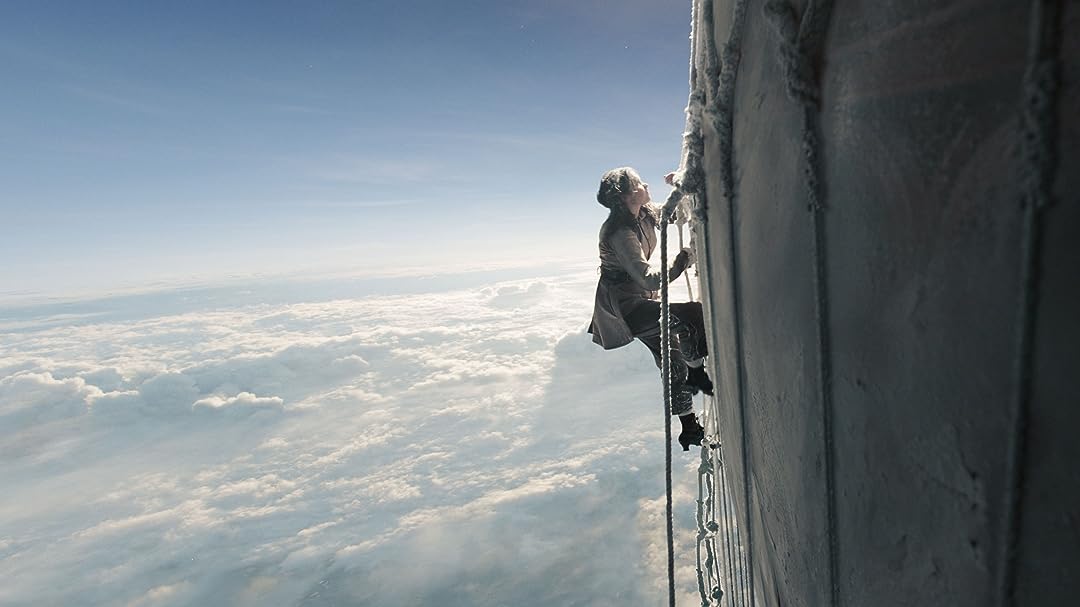 (3,194)
6.61 h 40 min2019X-RayHDRUHDPG-13
In 1862, daredevil balloon pilot Amelia Wren (Felicity Jones) teams up with pioneering meteorologist James Glaisher (Eddie Redmayne) to advance human knowledge of the weather and fly higher than anyone in history.

B.D.Reviewed in the United States on December 20, 2019
1.0 out of 5 stars
A Truly Disgraceful Rewriting of History for Political Reasons
As should hopefully now be general knowledge, this new film 'The Aeronauts' is presented as a historical biography of James Glaisher, an early balloonist, as he breaks the world record for altitude in the 1860s, yet the filmmakers have completely removed his solitary flight companion, Henry Coxwell, the man who ensured the success of the mission and saved both of their lives, and instead inserted a completely fictional female character, "Amelia Rennes", who takes over the proceedings and even narrates the film.

At the conclusion, Glaisher stands before the Royal Society and thanks his (fictional) Indian friend and (fictional) Rennes, saying he couldn't have done it without them, even though neither of them existed, and it ends with an implied romantic relationship between him and Rennes, even though the real life Glaisher had been married for over 20 years by this point, to Cecilia Belville, an interesting woman here edited out of history altogether.

All the disastrous changes mentioned above were made for purely ideological reasons, to meet some 'diversity' agenda, and with the no doubt loudly stated aim of inspiring young girls to go out and... I don't know, do the vital work of ballooning or something.

I get why some "woke" people might want to leap on board this virtue-signaling express and go woo-woo, but I need it explained to me: how is changing history and lying to little girls supposed to spur them on to greatness?

A shameful blot on not only aeronautical but cinematic history, this is a new low for the ideologues hell-bent on making the world in the image of their own fantasies, no matter how many untruths they have to tell to get us there.

Original Toe KneeReviewed in the United States on December 20, 2019
2.0 out of 5 stars
Is it ok to falsify the true story?
Verified purchase
"Henry Coxwell saved the life of a great scientist" when they broke the world record going to 39,000 ft. Creating a FALSE hero story for a 2019, based on that factual reality, changing the true hero toa fictioinalized ideolized brave modern woman seerves no one. I agree with the critics who say "there were MANY GREAT WOMEN in our past history worldwide WHO ACTUALLY DID GREAT THINGS, and why not do the "based on true story" about one of them....?" This movie movie could have been an excellent movie simmply by either being a different movie or by sticking to the true story.
2165 people found this helpful

Dianne MReviewed in the United States on December 21, 2019
1.0 out of 5 stars
Fake news
Verified purchase
They added a female heroine to pander to current social trends. She was fictitious, yet Eddie's character was a pioneering weather scientist - a real person. The movie was dull and the female character was bossy, which would not have been realistic to the time period. We "speed-watched" it in 20 minutes. Afterward, we watched "Bob's Burgers" to purge our memories of its existence.
1733 people found this helpful

BluedevReviewed in the United States on December 20, 2019
5.0 out of 5 stars
Exhilarating......that about captures this movie!!!
Verified purchase
The short of it is this in a few words.........whimsical yet adventurous, great characters, AMAZING cinematography with breathtaking imagery. The characters are compelling, to the point you feel like your there with them on this journey. This is a excellent movie to get caught up in and forget about everything else. Just a pleasure to watch........

UPDATE: Just checked in to maybe watch this again.....reading some really harsh reviews that seem really off point. If you want to be entertained this movie WILL accomplish that for you.....if your wanting an historical documentary that's not what this movie is nor was it supposed to be....not sure why its being measured against that criteria. Hope folks can just relax enough to ENJOY this movie with some popcorn for its entertainment value.....best wishes!!!
740 people found this helpful

C. EllisReviewed in the United States on December 22, 2019
1.0 out of 5 stars
The elephant in the basket
Verified purchase
I thought this was a very compelling movie and yet during the entirety of it I kept asking myself how much of it was true. Turns out most of it was very true....except for the single most glaring aspect which is that the real live participants were two MEN NOT ONE MAN AND ONE WOMAN!!!

As soon as the movie was over I researched the true event and when I found that out the movie became an immediate flop to me. If you're going to retell the historical tale of an event, AT LEAST get the genders accurate.

Are we so desperate to include and encourage our girls and women in so called modern society in everything that we change history just to accomplish that? Why aren't we telling the real stories of real women who displayed courage and discipline and love and remarkable integrity in the face of or in the midst of horrible conditions and situations? Why aren't we telling the stories or taking so long to tell the stories of these incredible women? When they made the Harriet Tubman movie, when I saw the trailer for it, I yelled out "FINALLY!" b/c I couldn't believe it took this long to get her story on the big screen. Why aren't we telling the story of Bertha "Grandma" Holt and her husband's choice to adopt Asian children after the Vietnam War and then create a successful (possibly the most successful) international adoption agency for children all around the world? People don't even know about her in general. Or Mother Theresa's story? What about the multiple women who joined up for war dressed up as men in how many different time periods over how many continents during how many different known and unknown wars and battles? Where are their stories? Mulan is only one of them but there are surprisingly quite a few others. What about the story of the first female fencer? Or ice-skater? Or scientist? What about Helen Keller? What about Rosa Parks? Where's her story? What about the first women who were allowed to join our military? What about how and when the WNBA was established? Or the first female astronaut?

IF we REALLY want to give our little girls examples to follow and admire then why aren't we telling these stories? Personally I think it's a bit much with all these movies coming out with basically the same message which is that women are better than men or women are equal to men but given the political landscape of our time I get it. That being said, the people who believe in that message and are responsible for getting that message out via film and media are STUPIDLY missing out on AMPLE opportunities to get this message out.

So what do they do? They take a real story and change out one character's gender for another. And interestingly it's the one who showed the most physical prowess and mental fortitude while the equally heroic meterologist in real life was shown on screen as somewhat weaker since it was he who in real life passed out.

The acting was great but since it wasn't accurately depicted it also is irrelevant if you're interested in a historical piece b/c this isn't historical. It's like telling the story of George Washington but with Santa Claus as his replacement.

I have spoken.
676 people found this helpful

Emily O.Reviewed in the United States on December 20, 2019
5.0 out of 5 stars
Clean Film that Promotes Courage, Knowledge, and Wonder
Verified purchase
Loved this film! Exceptional storytelling that kept you holding your breath throughout. Perfect for the majority of the audiences as the only reason this was a pg 13 was for intense action (there was a scene where a man fell to his death but they do not show the landing). Foul language was minimum (d**n), no sensuality, some blood but nothing gory.

Great moral regarding recognizing the wonder of this world in which we live with respect to pursuing those things which are truly important.

Would watch it again in a heartbeat!
451 people found this helpful

krause9Reviewed in the United States on December 21, 2019
1.0 out of 5 stars
Should not be presented as a true story!
Verified purchase
A man named Coxwell is the true "pilot hero" of this story.
Sad to see another attempt to rewrite history.
We should be able to give something like this 0 stars!
359 people found this helpful

sarahReviewed in the United States on December 22, 2019
1.0 out of 5 stars
Could have been good.....
Verified purchase
had they not traded out the man for a woman and tried to rewrite history. Sorry, Hollywood, but you can't rewrite history no matter how much you hate white males.
209 people found this helpful
See all reviews
Back to top
Get to Know Us
Make Money with Us
Amazon Payment Products
Let Us Help You
EnglishChoose a language for shopping. United StatesChoose a country/region for shopping.
© 1996-2021, Amazon.com, Inc. or its affiliates