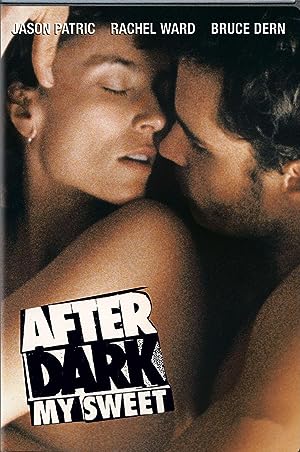 After Dark, My Sweet

Leaves MovieSphere in 6 daysRentals include 30 days to start watching this video and 48 hours to finish once started.

AlistairReviewed in the United States on June 28, 2020
4.0 out of 5 stars
Patrick shines in spite of numerous shortcomings.
Verified purchase
All the best moments in this film -- and what comes closest to achieving the essence of the book's feeling -- is when the camera is on Patrick and he's allowed to do his thing. More often than not, however, a weak supporting cast (Bert, Doc, Cop), criminally bad casting (Ward), and a zealous adherence to the book's text, serve to weaken the whole undertaking.
One person found this helpful

TressaReviewed in the United States on November 25, 2014
5.0 out of 5 stars
Wonderful modern noir
Verified purchase
I'm an obsessive film noir fan, I grew up watching the genre and it's one of the reasons I became a film critic by trade and I've been searching for this film for years after seeing once by chance on late night TV. Jason Patric (one of the most undderated actors of his generation, I might add) gives what I think is his finest performance (with the exception of Rush and The Beast- two other great films I highly recomend). The film is this great blend of modern noir I highly, highly recomend this film- you wont be disappointed.
12 people found this helpful

Atlas 1943Reviewed in the United States on February 10, 2019
3.0 out of 5 stars
Not a good movie
Verified purchase
Did not like this movie even though I liked Rachel Ward in the past performances.

N/AReviewed in the United States on July 20, 2020
1.0 out of 5 stars
Hate it
Verified purchase
Sucked big time

warrenReviewed in the United States on May 27, 2018
4.0 out of 5 stars
a character created with depth
Verified purchase
an exciting watch. the major attraction here is the finely crafted acting by Jason patric. this is the Jason he can be with roles and characters as this is. he doesn't need flash and boom...he creates it.
One person found this helpful
See all reviews
Back to top
Get to Know Us
Make Money with Us
Amazon Payment Products
Let Us Help You
EnglishChoose a language for shopping. United StatesChoose a country/region for shopping.
© 1996-2022, Amazon.com, Inc. or its affiliates