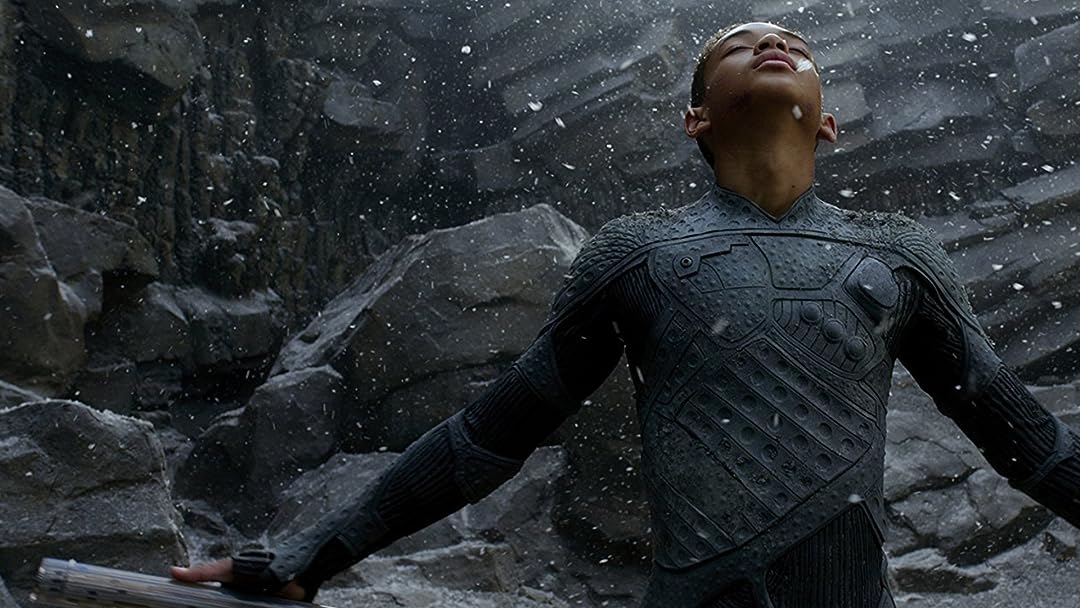 (9,087)
4.81 h 40 min2013X-RayHDRUHDPG-13
Far in the future, a young boy and his estranged father navigates an abandoned planet on which their space ship crashed.

Michael A.Reviewed in the United States on August 27, 2020
2.0 out of 5 stars
The Smith kid aint his daddy
Verified purchase
So, Will smith can act. He can do a range from comedy to action, to the difficult to make work action/comedy. He can even do drama (try Pursuit of Happyness, 2006 or Seven Pounds, 2008 if you missed Smith in something dramatic...and good).

Unfortunately, Smith being a capable actor placed next to his kid who can't act makes it REALLY obvious that his kid can't act. (Incidentally, Jaden WAS also in Pursuit of Happyness and, apparently, more capable at 6 years old than in his terrible roles since).

Mainly, this movie was annoying. I felt bad the Smith's character and for Smith himself. Jaden's character is a brat that doesn't really have to grow and evolve. Based on the few pictures I've seen of Jaden when I googled the film, it looks like Jaden is just playing...Jaden.

This movie is entirely forgettable. Jaden is the main character and Will Smith is support. Jaden just doesn't have the chops to make that arrangement work. Add in the fact that Jaden's character is just terribly written (probably so he didn't have to actually act much) and that the premise of the movie combined with the somewhat forced finale is just meh, at best.

Skip it. If the premise of a parent and child operating together on a dangerous, uninhabited planet and trying to find a way off interests you, I recommend Prospect (2018). That movie is not as flashy, not as big budget and is more slow burn, but ultimately has better characters and a more interesting story than the flashy "my daddy put me in a movie" garbage that "After Earth" serves up.

August Will DecayReviewed in the United States on April 7, 2019
5.0 out of 5 stars
i'm a dove
Verified purchase
was told i would hate this movie. i liked this movie. lesson learned, don't take opinions too seriously. so i won't recommend it to you and be a hypocrite. but i myself a lonesome dove out on a limb all by my self defending this movie, did like it.
41 people found this helpful

karma magersReviewed in the United States on February 21, 2020
5.0 out of 5 stars
Five thumbs up .... Uh, five stars
Verified purchase
I know this movie got panned, big time, when it was released, but I just don't get it. I thought it a terrific movie. Good plot with a few interesting twists, terrific special effects without being silly or rediculous, and EXCELLENT acting by Will Smith and Haden Smith. They were believable and real. I cared about their characters, believed their emotions and didn't detect any over-the-top acting.
This is a sci fi action film with plenty of action and on the edge of your seat moments. I was fully engaged through the entire movie, even during the quieter moments and the ending was satisfying. I recommend this movie to fellow Sci Fi lovers as well as Will and Jaden Smith fans. Five thumbs up ... Uh, five stars.
17 people found this helpful

Dad's DojoReviewed in the United States on June 11, 2019
4.0 out of 5 stars
Decent father/son movie
Verified purchase
This movie did not do so well and got alot of flak by movie critics. My son and I still watched it regardless because I think Will Smith is a great actor. It is a slow paced movie and do not expect action packed scenes throughout the whole movie. We enjoyed it and think there are some great messages that are being portrayed in each of the characters. I recommend any parent to watch this with their child and talk with them about what they learned and understand about the movie.
15 people found this helpful

Allan GreenspanReviewed in the United States on January 28, 2021
2.0 out of 5 stars
Just not that interesting
Verified purchase
I'm a sucker for aliens and hostile planet movies but somehow this movie fell flat for me. I thought the two main characters were okay although when Jayden was on the screen it felt like he was never quite in the scene the way Will seemed to be able to do.

Overall though, my biggest disappointment was I don't think the aliens and hostile planet were given their due. For example, there's a chase scene near the beginning where Jayden's character panics and incurs the wrath of a mob of large baboons. They're clearly physically superior to him in every way and each cut of the chase ends with him being only feet ahead of them yet somehow they never quite catch up. It ends when Jayden's character runs into some shallow water. Since all primates can swim and every creature on this planet was exclusively evolved to kill humans this scene, which was supposed to demonstrate how dangerous the planet is, instead made it clear Jayden was never going to be in any danger as he was protected by "main character" armor.

Overall, it felt like a lot of potential got left out of the movie in favor of focusing on character development and I don't think it worked out well. Probably would make a great video game.
6 people found this helpful

joel wingReviewed in the United States on December 13, 2021
1.0 out of 5 stars
Jaden Smith is SOOOO bad it's difficult to watch this movie
Verified purchase
People told me this movie was really bad so I had to see it myself to find out whether that was true.

The story is about Will and Jaden Smith crash landing on a planet where the latter will be able to prove himself to his father.

The most remarkable thing about After Earth is both Smiths are over acting. Jaden for example is trying to be too scared when they crash and talks with a funky accent. He’s supposed to have been in soldier training but he acts like a little child. He is so bad and annoying it makes it difficult to watch the film.

Not only that but as soon as the ship crashes you can predict what will happen at the end.

To top it off it was directed and partly written by M. Night Shyamalan! Boy are his releases up and down.

Overall, I should have listened to my friends and skipped After Earth because it is as bad as they said.
4 people found this helpful

Kindle CustomerReviewed in the United States on October 19, 2019
5.0 out of 5 stars
Sci-fi fun!
Verified purchase
Sci-fi fun. I love Will Smith in every movie I've seen him in. I originally watched this film in the theater when first released, and my review was annoyed, because frankly, I was angry over the nepotism of his son getting the lead because he's, well, the son. Now years later, watching it again by rental, I enjoyed all of it. I would have just liked more threats to overcome. Really cool premis of domineering father hamstringed, dependant upon his son for survival. 'Fraidycat son was interesting to see grow into his confidence. Sci-fi animals awesome, just wanted more. Again, Sci-fi FUN!
10 people found this helpful
See all reviews
Back to top
Get to Know Us
Make Money with Us
Amazon Payment Products
Let Us Help You
EnglishChoose a language for shopping. United StatesChoose a country/region for shopping.
© 1996-2022, Amazon.com, Inc. or its affiliates