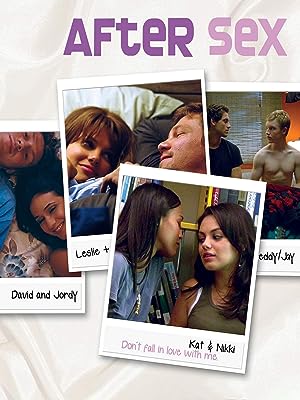 Russell SReviewed in the United States on February 24, 2014
5.0 out of 5 stars
Top 20
Verified purchase
I have to say that I got this movie because I thought the premise was different. What a huge shock at how much I loved it. this is an all talk movie with nothing blowing up and no world conquering aliens. Sweet and thoughtful movie about 8 couples and what they talk about after having just had sex. the couples are all different, friends with benefits, experimentations, one night stands (kind of) . Sll kinds of couples, too, an elderly couple, 2 gay couples (kind of), 1 lesbian couple (kind of) 5 straight couples. The talks are eye opening and revealing and in some cases funny. Harsh language sometimes...esp from Mila Kunis, yes, Mila Kunis. Dave Franco is terrific and so cute too. All the couples were really terrific, my favs....Freddy and Jay (happy sad or sad happy) and Marco and Alanna, so funny, he is GREAT, Leslie and Chris. This lovely little film gets huge recommendations (my opinion). You will smile and laugh a little and maybe well up a bit.
5 people found this helpful

jarice shermanReviewed in the United States on October 29, 2014
2.0 out of 5 stars
' Great concept but it was executed very poorly
Verified purchase
Collection of short stories! Flips to different "couples" giving you a glimpse into their conversations 'After Sex!' Great concept but it was executed very poorly! Not one of the "couples" was an actual "couple! Spoiler** Two "bi-curious couples," "one illegal couple (cop & prostitute), and another "couple that is cheating on their significant others..." Like what?! Didn't make any sense!!
Did a great job of leaving the audience wanting to know more! Mainly because decisions and revelations were made but we didn't get to see a finished product!
One person found this helpful

Josh & RachelReviewed in the United States on November 22, 2013
5.0 out of 5 stars
Great movie that sticks with you
Verified purchase
One of my favorite movies of all time. There are so many great, quotable lines from this film. I have seen it probably 24 times so far. This movie does a great job of highlighting important issues regarding sexuality that go unnoticed or ignored for whatever reason. I used this as a hall program several times because it helps foster so many good conversations.
6 people found this helpful

LaikenReviewed in the United States on July 7, 2012
2.0 out of 5 stars
Interesting Concept, Shaky Execution
Verified purchase
In all fairness, I don't really know what I was expecting when I ordered this movie. I browsed through the DVDs, thought I found an interesting one, ordered it, and hoped for the best. The movie arrived in perfect condition. It was still enclosed in the plastic wrapper, there was no damage to the disc, and it arrived in the promised two days guaranteed by Amazon Prime. The movie itself, however, was a little bit of a disappointment.

Firstly, let me begin by stating that I'm a woman. I'm a woman who very much enjoys the cheesy romantic comedies that present the female species with unrealistic expectations of romance. Chick flicks are a must-have, as far as I'm concerned - and how much more "chick-flicky" can you get than a movie that seemingly focuses entirely on pillow talk?

Secondly, I'm a big fan of Mila Kunis, so it was mostly her role in the film that encouraged me to purchase it. On the up side, Kunis appears in the movie for about as long as everyone else in the film. The downside, however, is that nobody is in the film for very long.

Each couple presented an interesting story to the movie which, I believe, could each easily be made into separate plot lines, and therefore separate movies. The concept is that all eight of the couples featured in the movie are linked together by some sort of "After Sex" talk - and, in theory, it sounds intriguing. The frustrating part is that each couple has a story that could be explored in greater detail, with much more humor and more in-depth emotion than the time constraints for this movie allowed. So, without the background stories and insights into the characters, the theory put into practice turns into the viewer essentially taking tiny clips from what feels like eight lengthy movies, and trying to summarize them all in your head by relating them to back to the title of the film.

In short, it's okay. Nothing spectacular, and nothing horrible, either. It would have been better with a little more territory to explore with each couple. It's okay for background noise, or for something to watch while eating a quick meal, but definitely not a movie to sit down and watch with friends if you're looking for a laugh.

Steven EpleyReviewed in the United States on June 12, 2013
4.0 out of 5 stars
Steve's Review
Verified purchase
I was't quite sure what to expect with this movie. It has a good cast and I am a fan of the different scenario approach to story telling. This movie is worth a look if your a fan of romantic dramadies, like I said good cast and good stories. Check it out!
3 people found this helpful

Amazon CustomerReviewed in the United States on June 12, 2020
5.0 out of 5 stars
Good
Verified purchase
Great movie for the gays

mthoma16Reviewed in the United States on November 14, 2019
5.0 out of 5 stars
Undergrad Thesis
Verified purchase
I did my undergrad thesis about this film. I love the interesting story telling and the different yet human experiences these characters go through. The way themes are presented is like nothing I've seen in indie film before.
One person found this helpful

lhaszenergyReviewed in the United States on December 27, 2012
3.0 out of 5 stars
slow..
Verified purchase
Really thought there would be more Mila Kunis in this one. The move was very slow. I found myself skipping scenes just to get to the best parts of the movie which were the ones that mila was in.
3 people found this helpful
See all reviews
Back to top
Get to Know Us
Make Money with Us
Amazon Payment Products
Let Us Help You
EnglishChoose a language for shopping. United StatesChoose a country/region for shopping.
© 1996-2022, Amazon.com, Inc. or its affiliates