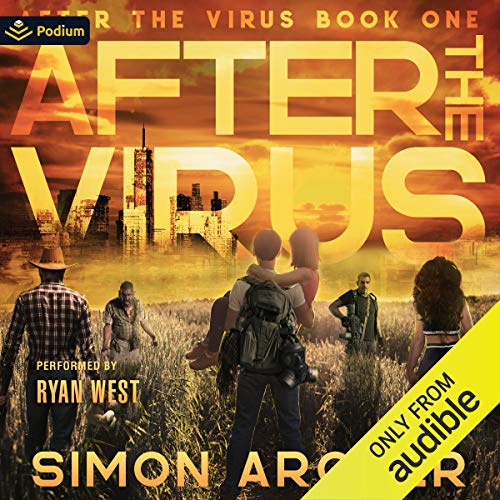 Henry never realized he was special. Sure, he’s an engineer who served his country, but when the virus hit, he found himself alone in a nearly empty world.

That’s the key, though: nearly empty.

There’s no one left who has the technical know-how to make the world run again...except for Henry. For humanity to survive, he will have to rebuild society out of the motley crew of survivors. It might be impossible, but at the same time, Henry has always loved a challenge.

matthew
4.0 out of 5 stars I liked it
Reviewed in the United States 🇺🇸 on October 19, 2022
Verified Purchase
I agreed with most of the stuff that the MC’s did. I would have liked to have seen a bit more effort put into finding survivors near them but whatever.
The book is great. The only things that brought down my rating is the talk of sharing his women with other men in the future and the religious nut job as the villan.
Read more
Helpful
Report abuse

John
4.0 out of 5 stars World starting over
Reviewed in the United States 🇺🇸 on June 12, 2022
Verified Purchase
After the Virus by Simon Archer is an apocalypse story where most of mankind dies overnight - killed by an unsuspecting and unknown virus. The survivors are far and few between. The main character of the story immediately plans for the future and gathers food, supplies, and livestock, taking it all to his farm. While scavaging, he comes upon a young female, Jackie, who immediately joins him in helping in prepping for the future. Only a couple of days pass before they have sex - the author is quite descriptive during this activity. They soon come upon additional survivors. One is a stranded doctor from the CDC in Atlanta.

I'm glad the story ended there with no mention of a sequel. The last chapter introduces a religious fanatic who convinces his followers to find this group of survivors and kill them. So I have to assume a sequel in underway. I will pass on continuing this series.

I found several editing issues and suggest that if the author is considering a rewrite, then remove the sex scenes and innuendos from the rewrite, which seems to be a real turnoff to many readers.
Read more
2 people found this helpful
Helpful
Report abuse

Kindle Customer
4.0 out of 5 stars A good Tory but needs work.
Reviewed in the United States 🇺🇸 on August 12, 2022
Verified Purchase
Good book. Good story. Not enough going on to keep my interest. I don't particularly care to read about sex and although there is a lead in to book 2 everything happens in slow motion.
Read more
Helpful
Report abuse

Mvargus
3.0 out of 5 stars Review - take 2
Reviewed in the United States 🇺🇸 on July 22, 2020
Verified Purchase
My first review got rejected, I suspect for language because I was scathing about one element of this story.

I did see issues with the travel, not that it was too hard/ too easy. More that people run into people who make me wonder how they could survive any kind of apocalypses. One thing that The Stand by Steven King did right was include the fact that many survivors of the plague died quickly due to bad decisions they made. That doesn't happen here, and some characters who show a lack of common sense manage to survive quite a while.

And then we had the major villain, both for this book and the one hinted/revealed for the future. Sorry, I've had enough of that type. They are cliche to a level I dislike. There just isn't anything new in those plotlines. And while the story is well written and has some engaging characters, those less than interesting plot twists make me downgrade this book so barely above 2 stars.

Its not really a bad book, but I rate on how/if I'd recommend this one. I know that I'd be hesitant to recommend it to many people. It just rubbed me the wrong way by using overused cliche villains in another apocalypse tale.
Read more
9 people found this helpful
Helpful
Report abuse

Wes
4.0 out of 5 stars An Overall Good Read
Reviewed in the United States 🇺🇸 on May 17, 2020
Verified Purchase
Okay, I really liked the character development, the characters felt fleshed out and like complete people.

I didnt like the quick jump into sex and harem, maybe add a disclaimer at the bottom of the book description.

Dont treat the female characters like they are there to just have babies and do women duties; the character development for Jackie jumped too many extremes, if you're going to have her shift like that, maybe add a scene where she is burying her mother and then reminisces over future baby plans and how her parents always wanted grandchildren. There was no exposition into Jackie's thought process for the drastic shift from "Im a badass survivor, to Yeah! Babies!"

The church egotistical church leader as the big bad was an awesome touch! I like it. I hope Henry slaughters them all in the future books.

Pacing, I understand the first book is world building, so you will have a lot of text about exploration, maybe try and incorporate some difficulties instead of just have the main character experience a series of perpetual, "lucky days."

Four out of five; I like the book, but some things about the characters were hard to believe and the story dragged in places. I will still buy the next in the series and see where this author takes the story.

Robert Haxton
4.0 out of 5 stars one of the better ones
Reviewed in the United States 🇺🇸 on April 7, 2022
Verified Purchase
During the pandemic I have read many of the post apocalyptic books. I usually stayed away from the disease ones, but this one interested me. The plot, while constricted by the genre, was well constructed. The characters were well defined and engaging. I enjoyed the book. Thanks for the work
Read more
One person found this helpful
Helpful
Report abuse

Kindle Customer
4.0 out of 5 stars Different than most of this type storied
Reviewed in the United States 🇺🇸 on May 9, 2022
Verified Purchase
Good characters, decent story line, screams of sequels, recommend and know you will like - read the whole thing in one setting.
Read more
One person found this helpful
Helpful
Report abuse
See all reviews

Ann
3.0 out of 5 stars Started well
Reviewed in the United Kingdom 🇬🇧 on June 16, 2021
Verified Purchase
Had an interesting start but disappointingly deteriorated towards end. It appears that the writer is presenting his own fantasy as a good-looking ‘stud’ in amongst a plethora of over-eager women. You have made me, as the reader, despise the hero of the tale.
Read more
One person found this helpful
Report abuse

I'm Trying to read.
5.0 out of 5 stars Sassy and saucy
Reviewed in the United Kingdom 🇬🇧 on July 19, 2020
Verified Purchase
My sort of book. Practical solutions to problems after a disaster.

Good content and fun to read. (with a side order of sex!)

It concentrates on the problems that could be encountered AFTER a pandemic.

Makes you want to get the second book in the series.
Read more
Report abuse

Avid Reader
5.0 out of 5 stars Real Gem 💎
Reviewed in the United Kingdom 🇬🇧 on March 29, 2020
Verified Purchase
Well this is a real gem of a story,it has romance,action,a farm with a lot of animals read it is a good adult story.Thank you Mr Archer.
Read more
Report abuse

Kindle Customer
5.0 out of 5 stars loved it
Reviewed in the United Kingdom 🇬🇧 on May 1, 2020
Verified Purchase
good read finished in one night. book is nicely balanced. i am waiting for next book hope will be good as good as first.
Read more
Report abuse

Alan K
5.0 out of 5 stars A fun and somewhat sobering read in these times
Reviewed in Australia 🇦🇺 on March 23, 2020
Verified Purchase
Reminiscent of Eric Valls Without Law series we have an ex-military man trying to rebuild after an apocalyptic event wipes out a majority of the population. I would hope that after an event like that there were less people inclined to be problematic, but that wouldn’t make an interesting story. The MC has some mechanical and engineering skills along with his military background to help create an environment where him and his new lady friend can build a future. The story does have some initial sex scenes detailed but is mostly FtB. This book does have harem elements building. Its also an enjoyable and fairly well paced read with a bit of pop culture references thrown in. Hopefully more books I this series will follow. Timely release with the Covid-19 pandemic being a majority of the news every night.
Read more
One person found this helpful
Report abuse
See all reviews