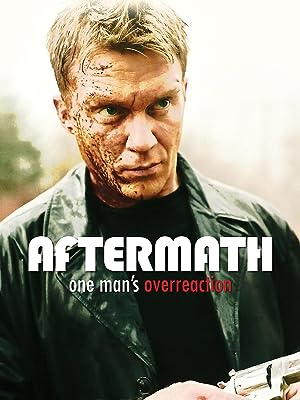 (44)
5.11 h 21 min2014R
A dark comedy thriller about one man's overreaction! Tom's (Anthony Michael Hall) life is perfect: he owns a construction company and his wife (Elisabeth Rohm) is expecting. It all unravels when Tom's foreman is missing and he fires the wrong guy.

LReviewed in the United States on October 27, 2015
4.0 out of 5 stars
Never forget to pick your battles !!!
Verified purchase
I wanted to give Aftermath (2013) a flying 5 stars...but the last 15 minutes of the film are really disappointing. The film starts off really strong. It is one of those independent thrillers with an interesting and very realistic movie plot. The film also incorporates Sin City-type of comic book effects, and is composed like a short book; 4-chapters all together.

Tom Fiorni is leading a perfect life. He is a successful owner of a large and prosperous construction company that builds houses. He is also married to a beautiful wife, who is expecting their first baby. He has it all, a beautiful house, money, happy marriage...the only problem he has is with one of his foremans...who happens to be a knucklehead and an ex-felon. One day, a situation transpires and the foreman gets fired...from than on the life of Tom Fiorini and his wife will change for worse...much -- much worse...

*The last film to feature Chris Penn (the younger brother of Sean Penn) who died of natural causes in 2006...he died before the film was released.

thehorrorwithinReviewed in the United States on May 19, 2015
3.0 out of 5 stars
solid indie thriller cut like a comic
Verified purchase
This is s solid and surprising little indie. It is definitely worth a watch if only to see Chris Penn & Anthony Michael Hall who both give strong performances, though sadly it's Chris Penn's last. That being said, there really isn't much story development or evolution of character in this film. It's edited in an off beat, comic book kind of way which at times is fun and at others, feels superfluous but I was enjoying myself enough to not really care. Chris Penn is a power house and his intimidating power can be felt through the screen. It's that palatable. Anthony Michael Hall has really grown up and he looks and sounds like a totally different person in this film That alone was compelling. There are a few other people in more minor roles but as the story doesn't delve past skin deep for very long, there's not much else worth mentioning. I liked this film. It was great to see these guys play off of each other but if you're looking for something layered and profound, I don't think you'll find it here. Treat it for what it is and it''s a fun ride.
2 people found this helpful

Justin CollettReviewed in the United States on March 19, 2018
1.0 out of 5 stars
It's just horrible film making
Verified purchase
The director and cinematographer should never be allowed to touch a camera again. I think there might have been some decent performances in this dumpster fire of a story but we will never know. Thats because it appears there was a drunken monkey operating the camera. It's not stylized when the audience can't see or understand what the story is. It's just horrible film making. Shame that this was Chris Penn's last film.
One person found this helpful

R. Noel BurrReviewed in the United States on March 27, 2018
5.0 out of 5 stars
Awesome!
Verified purchase
Underrated for this suspense thrillers that has excellent acting, a good storyline and keeps you on the edge of your seat. Also, Hall is superb.
One person found this helpful

americansniperReviewed in the United States on June 10, 2019
1.0 out of 5 stars
Unwatchable
Verified purchase
Not even wrong

Cody JonesReviewed in the United States on April 27, 2015
1.0 out of 5 stars
BAD!
Verified purchase
Watched the trailer and became excited because it looked good especially with the actor line-up. Turns out I gambled wrong, the movie is hardly a B class movie. It literally seems as though they filmed it with a consumer level camcorder and thought it would be fun to make a movie with friends. Story line and acting was decent but nothing outside the box, its the horrible audio and terrible video quality that really chops this movie up. Although there was a touch of crude acting and a rushed sense of hurry production....................BOTTOM LINE: Just don't waste your time.
6 people found this helpful

Casey LangReviewed in the United States on April 25, 2015
1.0 out of 5 stars
Who are these 5-star reviewers?
Verified purchase
I'm not sure I saw the same movie as the other reviewers who seem to love this turkey. The cinematography was interesting but the plot was confusing as well as depressing and grim. To me it failed the major test of a movie - it just wasn't entertaining. I kept waiting for the 'good' part of the movie, but the credits suddenly started rolling and it was over (except for a few snippets interspersed in the credits). This movie will not appeal to a general audience (and certainly not kids). There aren't many movies I wished I had never watched, but this is one of those few. I want an hour and twenty-two minutes of my life back.
5 people found this helpful

F. GreenleeReviewed in the United States on May 17, 2015
1.0 out of 5 stars
Stupid people behaving very badly
Verified purchase
If you like movies about a bunch of people that never use any part of their brain above the reptilian complex, you'll love this. The best thing about the movie is that they get what they deserve.
See all reviews
Back to top
Get to Know Us
Make Money with Us
Amazon Payment Products
Let Us Help You
EnglishChoose a language for shopping. United StatesChoose a country/region for shopping.
© 1996-2021, Amazon.com, Inc. or its affiliates