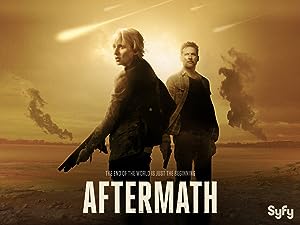 Season 1
(243)
4.92016TV-14
"Aftermath" centers on one family: Karen and Joshua Copeland and their children Dana, Brianna and Matt, who must battle for survival after civilization comes to an apocalyptic end, triggered by massive storms, meteor strikes, earthquakes and plague - and the rise of supernatural creatures.

J HernandezReviewed in the United States on October 8, 2016
5.0 out of 5 stars
Coming from Walking Dead this makes a nice apocolayptic show
Verified purchase
I was intrigued after first seeing the trailer for this. I used to love syfy when i was younger but then grew out of it. The quality of their shows seems to be improving. This is an interesting take on the end of the world with a biliblical take with unexplained phenomona and earthquakes not on tectonic plates There is so much going on meteors, plagues, crazies, demons, and the previews are showing even more crazy stuff coming. This wont be the greatest thing on tv but pretty interesting take and I like to see where they move the show from here. A lot happened in the first episode and its getting worse before it gets better cant wait.
11 people found this helpful

Movie ScumbagReviewed in the United States on December 4, 2016
5.0 out of 5 stars
A total fail but recommend u watch
Verified purchase
This show grew on me. First episode I also thought maybe this would suck. Certain things happen which don't make sense. Perhaps bad editing. For instance one of the twins sees something happen to her twin sister. Her reaction afterwards is reserved. Then she sees something happen to a stranger and totally freaks out. The mom makes comments that somehow deny the obvious at end of episode.

Still I watched all 11 episodes. This show is a lot of fun. There's some taboo and ridiculous stuff in there but stuff that also makes u think. If this was the end of the world would they handle it like that. Probably yes. It's fun watch them all. I would say bc of graphic stuff that goes on this to me is rated R content

Tara EllisReviewed in the United States on May 30, 2017
2.0 out of 5 stars
Overkill With Bad Execution
Verified purchase
Let's sum up the first five minutes. We learn (via radio during an erratic drive home from work), that:
There are massive quakes happening around the world
Tsunamis
Volcanoes erupting
Solar flares
Disease outbreaks
A plague making people each other's faces off
Meteors heading for the earth
Tornado's
A plague of locusts
Oh, and two kids were eaten by a sturgeon in the Skagit River (SAY WHAT?)

Then ... the guy drives by two big dudes in dresses with a machine gun and snacking on a body

(meanwhile, back at his farm, while cleaning up after one of these killer storms)
Mom and son are casually discussing how teen son is going to join the peace corp
Twin 16 yr old daughters acting all, you know, teenagish, discussing how one is going to run off to live with her boyfriend in Seattle, while the other one rolls her eyes and says how now she's going to have to tell mom.

It only gets worse from there. I give two stars because it has good filming. It feels like a show that was planned with a big budget with the writers hired out of an elementary school. Seriously.

DonnerjackReviewed in the United States on March 26, 2017
3.0 out of 5 stars
Late night time filler.
Verified purchase
Disjointed, random, weirdness. Anne Heche literally wear aviator sunglasses for almost the entire series. Every single minute of it. Indoors, at night, in a cave, etc. They are glued to her face. Horrendous writing and directing. Acting is good by most everyone, they just get abused by the bad writers and director.

Interesting story that keeps you watching for what crazy will hapoen next. You will sit through some embarrasingly bad script/directing though before you get to it.

It is worth watching if the mainstream garbage is getting stale. Its redeeming quality is its surprises and twist (ok. Kudos to the writers on that one).

It has great potential if they finesse it a bit on a second season and tighten up the story.
4 people found this helpful

jeffReviewed in the United States on December 23, 2016
5.0 out of 5 stars
Love it
Verified purchase
Great show with with a little bit of SCI-FI, end times, survival, disaster, family drama, and a bit of comedy.
The story premise is great but the writing and some acting could be better. The Mom is more like a man than the dad, the 2 daughters are annoying, the dark haired one is the typical Mary Sue that I keep wanting one of the meany daemons to kill slowly. The blond is more of a dumb blond type that is more interested in her phone and boys than surviving.
5 people found this helpful

Chris W.Reviewed in the United States on January 13, 2017
5.0 out of 5 stars
Decent series for what it is.
Verified purchase
It this show perfect, not by a long shot. It is entertaining, definitely. One of the things I realized about this show is that it makes sense near the end of the first season. I am thinking the creators wanted it like this but it comes together pretty nicely at the end. Hopefully there will be a second season as I did enjoy the first one. Whats not to like about demons infected, volcanoes, mystical beings, dragons, creatures from various myths around the world and an end of the world twist.

I'm sure that it probably wasn't meant as a metaphor of how the bourgeoisie (top 1%) has turned the U.S. economy to total s***, for the test of us, with all of the new economic monsters that us 99%er Americans families need to wrestle with today, or about how the bourgeoisie (top 1%) have done this by sending all the jobs, that they possibly could, overseas...But it sure feels, metaphorically, like the struggles of American families today....We can soooo relate.

We hope that this show continues! It is an inspiration!

Culper, Jr.Reviewed in the United States on September 2, 2021
3.0 out of 5 stars
Not sure what to think
Verified purchase
As they never got to a second season I don't know what to think. Did the writers not know what was coming next and were just winging it or did it get cut off before they could tell the whole story? A weird ride, regardless.
See all reviews
Back to top
Get to Know Us
Make Money with Us
Amazon Payment Products
Let Us Help You
EnglishChoose a language for shopping. United StatesChoose a country/region for shopping.
© 1996-2021, Amazon.com, Inc. or its affiliates