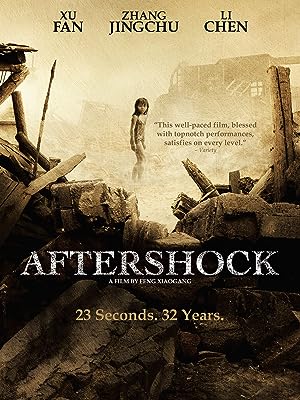 (218)
7.52 h 15 min201013+
Tangshan, 1976. Two seven-year-old twins are buried under the rubble of the deadliest earthquake of the 20th century. The rescue team explains to their mother that freeing either child will almost certainly result in the death of the other. Forced to make the most difficult decision of her life, she finally chooses to save her son. Though left behind as dead, the little girl miraculously survives, unbeknownst to her brother and mother. AFTERSHOCK follows the family on their separate journeys over the course of the next 32 years, as they build lives forever shadowed by the traumatic experience of the earthquake, and eventually face each other--and the decisions of the past. Featuring an all-star cast including Jingchu Zhang (Rush Hour 3) and Daoming Chen (Hero), AFTERSHOCK broke all box-office records in China with its powerful exploration of how one moment can change a family's life forever.

Shirley NgReviewed in the United States on October 20, 2013
4.0 out of 5 stars
Unforgettable
Verified purchase
I really liked the movie and almost gave it a 5 star rating as I felt the story, the drama it portrayed and the acting (not counting the awful performance of one, lone Caucasian actor who briefly appears near the end) deserved it. However, in an effort to rate objectively, I settled for 4 stars because it ran somewhat slow and those who want more action or suspense (beyond the actual earthquake scenes) would be disappointed. I feel a 5 star rating should be reserved for movies that successfully incorporate those elements as well. That having been said, I do highly recommend it. I enjoyed it not only for it's aforementioned merits but also for its glimpse of life within communist China that showed how dramatically lives began changing during the country's move into the 21st century, and how universal the nature of grief and the way human beings react to loss is so movingly portrayed. On those accounts, it's a movie I personally will not soon forget.
3 people found this helpful

BRIE O.Reviewed in the United States on March 9, 2022
5.0 out of 5 stars
OMG!!!
Verified purchase
I LIKE ALL TYPES OF MOVIES SO YEARS AGO I SEEN THIS MOVIE ON NETFLIX AND IT TORE ME UP INSIDE!!! IT WAS SO SAD...I HONESTLY DONT THINK I EVER CRIED SO MUCH FROM ONE MOVIE. IT WAS A GREAT STORY THOUGH. ALSO ABOUT A YEAR AGO I WANTED TO SEE IT AGAIN BUT FOUND OUT THEY TOOK IT OFF NETFLIX BUT HAD IT TO RENT OR BUY ON AMAZON...YOU BETTER BELIEVE I BOUGHT IT

AntonioReviewed in the United States on January 11, 2014
4.0 out of 5 stars
A real human story that makes you feel human
Verified purchase
It does have English subtitles, but I think you have the option of getting the version which is dubbed into English, but I just read the subtitles so that I could hear the Chinese dialect that they were using. China has 300 ethnic groups, each with their own language, although I think Mandarin is the one they mostly use. But it was a story based on an actual event in recent history; the 1976 earthquake in Tangshan, China which killed 240,000 human beings. It is a great story, although it is not said to be based on an actual family's experiences, I think it's fair to say that it is an accurate depiction of what many families experienced. A great ending.
One person found this helpful

CherylanneReviewed in the United States on February 21, 2016
5.0 out of 5 stars
So Much More Than I Could Have Imagined!!!
Verified purchase
The story and the acting were superb, which is an understatement. I have never watched a subtitled movie. The story line appealed to me and the reviews were excellent so I thought it might be worth the effort. The thing is there was no effort. I forgot I was reading the words or that the actors were speaking in a foreign language. I know I read the words, but the actor's expressions and emotions were so clearly visible on their faces I don't remember reading the words. I mostly just felt from beginning to end. What an amazing movie!!!
3 people found this helpful

JoAnn P ButlerReviewed in the United States on September 5, 2016
5.0 out of 5 stars
A MUST SEE!!!!
Verified purchase
I loved this movie!!!!!!!!!!!!!!!!
From the first time I watched it on Netflix several years ago - I have invited tons of friends over at different times to see how very easy we can 'assume' a truth that is far from the truth. It is a documentary that will never leave you - the impression is valuable!!
Also, children are very resilient in the face of tragedy but oh how tragedies shape who they are unless reputable adults help them. What loyalty and devotion this Mother displayed - not like the world in which we live now - when everyone is Me First!

Just some old guy.Reviewed in the United States on April 26, 2012
5.0 out of 5 stars
Good Lord....
Verified purchase
Many foreign films I see I actually do not like as much as other reviewers but that was not the case with Aftershock. It shows just how brutal dealing with the loss of a loved one can be and how hard it is to carry on with your life from all aspects.
Spoiler -->You pretty much get what it is about from all other reviews but what really tore me up is when the girl said to her foster father that she lied. It was not that she could not remember..it was that she could never forget. She could never forget the last 3 words she heard her mother say when she was 7 years old and trapped in the rubble with her twin brother....."Save My Son".
3 people found this helpful

terry maylingReviewed in the United States on April 1, 2020
4.0 out of 5 stars
Words do hurt
Verified purchase
Words taken out of context do hurt. Caused a lifetime of grief for everyone involved. Fortunately time and circumstance gave them time to make amends which in real life we can't always do. Very worth watching.
One person found this helpful

S. M.Reviewed in the United States on May 8, 2018
5.0 out of 5 stars
Great Movie Featuring Jingchu Zhang
Verified purchase
This is a surprisingly good movie. The story and the acting are top-notch. I usually stay away from movies based on real-life incidents, especially after I saw James Cameron's schlock-fest "Titanic". I hadn't read too much about the movie before I watched it, so I had little idea of what to expect.
Jingchu Zhang was especially good, and now I want to see every movie she's ever made.
See all reviews
Back to top
Get to Know Us
Make Money with Us
Amazon Payment Products
Let Us Help You
EnglishChoose a language for shopping. United StatesChoose a country/region for shopping.
© 1996-2022, Amazon.com, Inc. or its affiliates