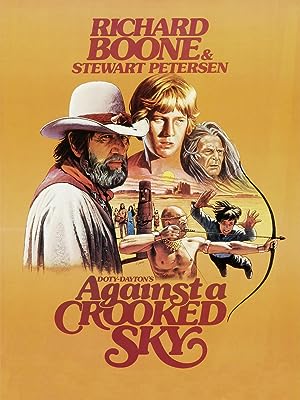 Against A Crooked Sky

Don Diego VegaReviewed in the United States on December 14, 2019
3.0 out of 5 stars
Good story, low production values, dated
Verified purchase
Not exactly a Richard Boone film.
A lame western directed by a tv director. Some of the shots looked composed by an amateur. The lighting is bad too.
The boy Peterson’s acting is adequate. Boone plays a cantankerous old mountain man. He is enjoyable. The woman who played the mother, she was a good actress.
I’ve never seen a copy of this film that you could rate as good.
The background music that is the score, it’s just sparse and when it plays it’s too much very 70s type brassy sound. There is actually an interlude with sappy folk song being played.
The basic story is good and unique. It has themes of love, self sacrifice, and faith in God. For many folks who like that type of film it may be pleasing to watch. But it is dated.
This story needs a remake.

Chris N. The GOATReviewed in the United States on July 23, 2016
4.0 out of 5 stars
Good Family Movie, Not great Video Quality
Verified purchase
I do not know if they cleaned this up with a better digital master. It looks a bit better than the DVD that I remember from 5 or 6 years ago. I remember seeing this one in a drive-in when I was a kid. The colors on the big screen where pretty great. The theaters would do a family night thing with several older(4-5 year old) movies. This version is Ok. But it is still a bit washed out. The sound warblers in a couple of places. The story is a decent tale. It has some good elements that are gut-wrenching, harsh, and a bit comical. There are also a few eye-roll moments where you feel that the coward is calling out someone else as the coward, and it is not the case. Some biblical references that some may find a bit cheesy but not crazy over-done. A couple of "WHUH?" moments but, heah, plot points have to come from somewhere. I would not say that the young man is one dimensional, like some others; just naive and well equipped with the short-sighted mind of youth. So yeah, a family movie that just happens to be a western, with a few "hells and damns" thrown in, mostly by Richard Boone. It has Three of the Five best things in a movie: horses, cowboys, and dogs. Sorry no Vampires or Zombies. Lost American Indian Tribe. Gold. Loss. Redemption. What more do you want? A few free streaming movies and some shipping are worth Amazon Prime.
6 people found this helpful

Nobody KnowsReviewed in the United States on September 26, 2011
2.0 out of 5 stars
Against a Crooked Transfer
Verified purchase
I purchased this DVD because I remember enjoying the movie on it's television broadcast in the late '70's. I guess I was younger and my tastes are more discerning now. First, the transfer was terrible, with much of the colors faded, washed out or "burnt" out. Also, images were usually soft, sometimes out of focus. I am sure this was the fault of the transfer process, not the filmmakers. This is the 2010 Echo Bridge Home Entertainment version and it is really a poor transfer. The DVD looks like a bootleg transfer from a bootleg VHS copy. The front of the package states WIDESCREEN across the bottom, but it is neither letter boxed nor a correct ratio as often the images from the left side of the screen are clearly clipped off.

From a film critique point of view, the acting is stiff, and either wooden or over the top, depending on the actor in any given scene. The camera work may have been OK, the transfer kills any hope of seeing good photography. I think the story is very good and could have been so much better. This is one of the few times I would like to see a re-make, as I think the story had much potential. The final "Race Against Crooked Sky" should have been an edge of the seat nail biter. It wasn't. The characters motivations lack depth or commitment. You feel as if the characters are motivated only because that is what the script told them to do or say. Richard Boone is somewhat entertaining, doing a somewhat of a "Rooster Cogburn" type character.

Last note, this particular transfer is the edited version, definitely PG, as the brief nudity discussed in other reviews is not present in this transfer.
11 people found this helpful

kosakiReviewed in the United States on November 6, 2016
3.0 out of 5 stars
OK movie
Verified purchase
The only person in this movie that could act was Richard Boone. The storyline was good and the Director was not so good File editing could have been better. The other part of the story was a young woman was kidnapped and forced to have a baby from the man that did the kidnapping would not be so forgiving. More truth in the story would help.
2 people found this helpful

game loverReviewed in the United States on April 23, 2009
4.0 out of 5 stars
High noon at Crooked Sky
Verified purchase
I saw this movie for the first time on TV back in the 70s, apparently when it was first produced. Although I only vaguely remembered the entire movie (and couldn't even recall the name of it!) a little googling of some key phrases helped me track it down. Some funny catch phrases that were spoken by the crusty old prospector, and especially the dream-like, haunting conclusion (which is almost too mind-blowing for words), stuck with me through the years, compelling me to find it and see it again.

This may not have been an A-list Hollywood production, but it dares to explore some unique and uncharted territory by making you reflect on just how far you might go to save something or someone that was dear to your heart, and shows how, so long as you go the extra mile and give it your very best shot, all things are possible and you just never know what fate might have in store.

One is left at the end with the vague feeling that not everything has been satisfactorily explained and that some unanswered questions remain, but these questions pale into insignificance against the main point of the story. You simply cannot fail to be moved by it.
7 people found this helpful

Star Wars FanReviewed in the United States on January 13, 2011
4.0 out of 5 stars
2010 version is slightly edited
Verified purchase
This move must have made quite an impact on me when I first saw it at the drive-in because I still remember it. I was happy to be able to order it on Amazon and watch it again.

Numerous reviews note the poor quality of the movie and there is even a disclaimer at the start of the version I bought which says they did the best they could with what they had. No, the quality is not 1080p but it was not that good in 1975 either. Yes, the quality has degraded over the years but it is still very watchable. Amazon sells about four different versions of this DVD with varying copyright dates. I bought the 2010 version thinking the quality might be better but I suspect I got the same quality as everyone else. One difference I did note however is I think a little bit was edited out of the 2010 version. The pond scene at the start has been shortened to remove the nudity. You still see her in the water but she is covered to the neck. The rest of the scene has been removed. I suspect a small portion of the Crooked Sky test scene at the end may have been edited too. I thought I remembered the shooting being a little bit more graphic.

Overall, it is a very good movie and since it has been edited a little, it is safe for the entire family.
2 people found this helpful
See all reviews
Back to top
Get to Know Us
Make Money with Us
Amazon Payment Products
Let Us Help You
EnglishChoose a language for shopping. United StatesChoose a country/region for shopping.
© 1996-2021, Amazon.com, Inc. or its affiliates