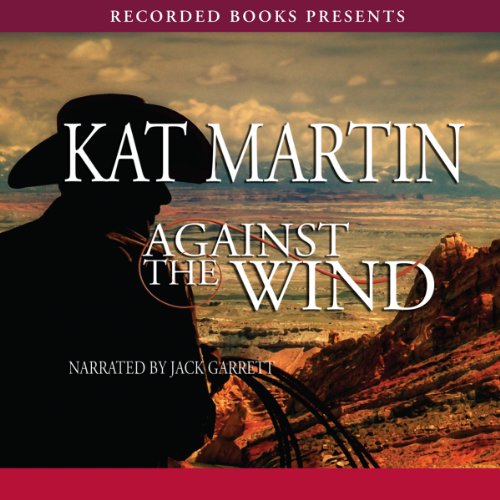 Against the Wind: The Raines of Wind Canyon, Book 1

New York Times best-selling author Kat Martin launches a riveting contemporary romance series starring the Raines boys of Wind Canyon, Wyoming. Back in high school, Jackson Raines was humiliated by the beautiful Sarah Allen, who wanted out of Wind Canyon at any cost. Now Jackson reluctantly opens his ranch to the recently widowed Sarah. And as sparks ignite, he finds himself protecting her from her dead husband’s shady business partners.

Christine Jalili
4.0 out of 5 stars Enjoyable.
Reviewed in the United States 🇺🇸 on December 20, 2022
Verified Purchase
I enjoyed this book. Jackson had a crush on Sarah but she didn’t treat him will in their youth. She’s in danger now, who killed her husband? He was abusive and I felt for her. Loved how Jackson still fell for her and her daughter too. Had some tears when she tells him her secret. Thankfully there’s a happy ever after.
Read more
Helpful
Report abuse

Theresa
5.0 out of 5 stars great read
Reviewed in the United States 🇺🇸 on January 3, 2023
Verified Purchase
Written well and a creative story line. Highly recommend. I am now going to find the second book and read it.
Read more
Helpful
Report abuse

Tooncesmom
VINE VOICE
4.0 out of 5 stars Good Plot, Lots of Action and Sex
Reviewed in the United States 🇺🇸 on March 23, 2011
Verified Purchase
Against the Wind is the first in the Raines of Wind Canyon trilogy and is the story of rancher Jackson Raines and Sarah Allen. It is also my first Kat Martin book.

Sarah was raised in Wind canyon but longed to leave and experience life in the big city, even though she had a yen for bad boy Jackson. Instead she wound up in LA, married to Andrew Hollister who, after the newness of their marriage had faded, turned into a womanizer and wife-beater. He also ran through his father's money with a big-time gambling appetite, and to supplement his dwindling resources, he turned to some shady deals.

The story opens with Sarah and her young daughter fleeing LA and questionable characters who are interested in some files kept by her recently deceased husband. Sarah takes Holly to Wyoming where she has rented a cottage on a ranch. Unbeknownst to her, the ranch is owned by Jackson who, over the years, has been successful.

At first he wants her gone, but deep down, he still remembers the young girl who broke his youthful heart, and he feels sorry for her plight and relents.

Sarah begins work as a freelance journalist for the local paper, but in a short time, her LA past catches up with her. By this time, both Sarah and Jackson cannot deny their attraction, and as Sarah sinks deeper into trouble, Jackson is determined to help her. My only niggle with Sarah was her inability to make a decision, however, she redeems herself at the end.

Martin pens a good story with a strong suspenseful plot, marred only by a surfeit of sexual thoughts and encounters. Sarah and Jackson make love often, and when they aren't thusly engaged, they are thinking about it 24/7. In at least two places, reference is made to his erection straining the zipper of his jeans. Now, I'm not sure one can really see this from twenty feet away, or why he'd have this reaction when talking to his foreman, but have it he does. And Martin makes sure the reader knows Jackson is a man with a huge sexual appetite. I like a good sensual scene...if it's germane to the plot, but two or three go along way in a book for me. My main interest is in what's happening next in terms of plot. While the writing is skilled, I could have done with less reference to enormous erections, fire in the loins and references to how anxious they were to get back into bed. Otherwise, this is a strong plot with real suspense.

Marie M
5.0 out of 5 stars "Against the Wind"
Reviewed in the United States 🇺🇸 on February 27, 2015
Verified Purchase
Sarah Allen took her five-year-old daughter Holly and left California to return to her hometown of Wind Canyon, Wyoming. Her husband was murdered and had a lot of enemies. He was a crooked businessman who had his hand in all kinds of shady businesses. He had lost everything and went bankrupt. Sarah left California with no financial security. She had to sell nearly everything she owned to get back to Wind Canyon. Sarah's marriage was both physically and mentally abusive. She tried to leave with Holly; he threatened to kill her if she left him. She was fearful someday her husband would hit their daughter.

Sarah rented a cottage while she was in California. She has a job working for the local newspaper. Jackson's housekeeper Livvy rented the cottage to Sarah. Jackson wasn't aware that his housekeeper had rented the cottage to someone he knew from High School. In High School he had a crush on Sarah. Jackson Raines owns the Raines Ranch. The cottage Sarah rented is part of the Raines Ranch. Sarah wasn't aware that she's renting from Jackson. It didn't take long before their existences were known since they live down the street from each other.

Sarah came home from work found her cottage a wreck. It looked as though, someone was looking for something. Her deceased husband had been blackmailing his former partners. He put all of the numerous names of companies, dates, and places where they dumped toxic waste, pay-offs to a state highway inspector and his offshore accounts on a storage disk. Sarah didn't know anything about the disk. Sarah was in an estranged relationship with her husband for several years. They slept in separate bedrooms. Sarah has known for years that her husband has had different girlfriends.

Both the FBI and the hired killers are looking for the disk. The hired killers have been stalking Sarah and threaten to harm Holly. Jackson will do everything he can to protect Sarah and Holly. Jackson and Sarah had great chemistry from the first moment they saw each other after 16 years. Jackson's brother Dev lives in Scottsdale, Arizona. He owns a chain of security companies in the Southwest and Dev is one of their best investigators. Jackson needed help and wanted to see what Dev's employees could dig up on Sarah's deceased husband's past.

This is the first in the series of Against. The Second is Against the Fire, and is about Jackson's brother Gabe. Dev will have his own story in Against the Law.
Read more
6 people found this helpful
Helpful
Report abuse

Vic
5.0 out of 5 stars Worth the Wait
Reviewed in the United States 🇺🇸 on March 30, 2022
Verified Purchase
Jackson had loved Sarah in high school but she rejected him. Life went on but he never quite forgot her. After a terrible marriage and death of her abusive husband Sarah decided to raise her daughter where she grew up. Little did she know the cottage she’d rented was on a ranch owned by the boy she’d rejected and humiliated all those years ago. Neither of them expected the attraction between them to spark so quickly or blaze so hot. But trouble had followed Sarah from L. A. . Would the feelings between them survive? Would Jackson be able to keep Sarah and Holly safe? READ THIS BOOK!
Read more
Helpful
Report abuse

Lynnette
4.0 out of 5 stars Good book
Reviewed in the United States 🇺🇸 on March 31, 2022
Verified Purchase
This was a good book with a good, well thought out story and believable characters. The author kept the love story going along with the mystery and made both parts believable and easy to read. Overall a good story.
Read more
Helpful
Report abuse
See all reviews

sue allen
3.0 out of 5 stars A good read
Reviewed in the United Kingdom 🇬🇧 on May 6, 2018
Verified Purchase
An enjoyable book, it was the first I've read from this author & I'll probably read some more at a later date.
Read more
Report abuse

Client d'Amazon
2.0 out of 5 stars Disappoined !
Reviewed in France 🇫🇷 on August 17, 2017
Verified Purchase
Frankly, when reading the comments for this author I did not know, I was expecting very good books as she mostly got 5 or 4 stars. So I trusted the comments and ordered the 3 books of this "Raines of Wind Canyon" series + 1 of the "The Brodies of Alaska" and 1 of the "Sinclair Sisters trilogy".
I already read "Midnight sun" and "Against the Wind" from the other 2 series and was not overly impressed. This third book is by far the worse and I was very disappointed and really had to force myself to finish it. I could not get into the story, I did not like Sarah''s character who was weak and could not seem to make up her mind, not to mention that the love scenes seem more the result of "OK, love scene : done, let's tick the box" until the next one. Must say I'm dreading to start reading the last 2 books of the series I bought. Guess that's it for me regarding this author.
Read more
Report abuse
Translate review to English

Sue Green
5.0 out of 5 stars Awesome book!!
Reviewed in Canada 🇨🇦 on October 7, 2020
Verified Purchase
I love all of Kat Martin's books. Everyone should read them!!
Read more
Report abuse
See all reviews