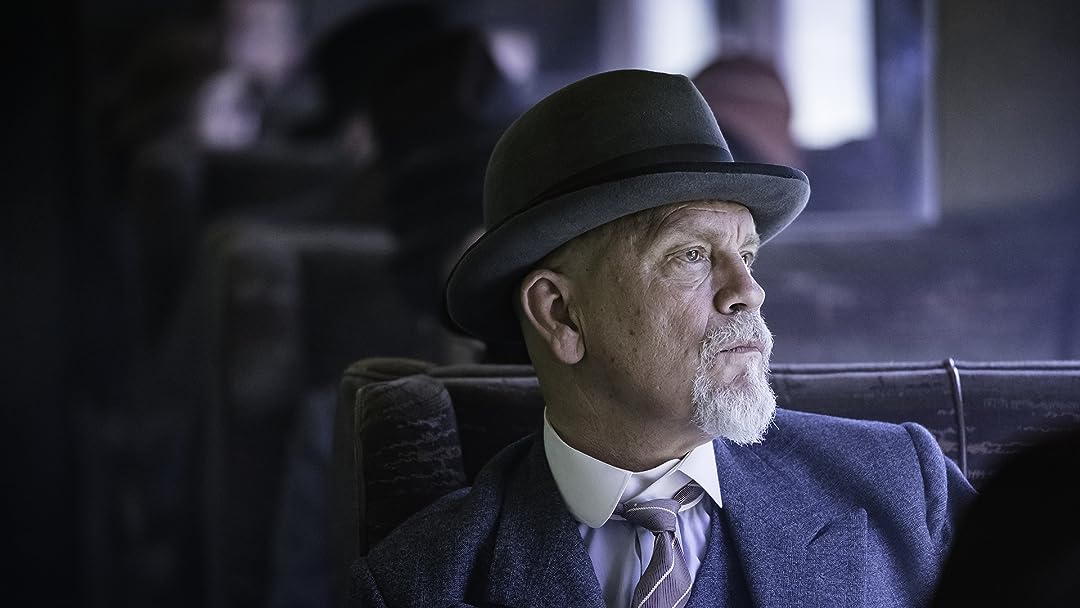 Season 1
(2,430)
6.62019X-RayUHD16+
1933. Hercule Poirot, older and greyer, receives letters threatening murder. The sender signs themselves only as “A.B.C.” When he takes the letters to the police looking for help, Hercule finds all his old friends have moved on. But soon there is a murder and the once-great detective must take matters into his own hands.

Scott HowardReviewed in the United States on February 1, 2019
1.0 out of 5 stars
Here is why I can't really watch this anymore than the hour I did watch
When I watch an Agatha Christie mystery. It's because I like mystery's, The good ole 'who dunnit' kind, the kind that are entertaining, campy, fun. I don't watch them to be reminded of how gritty life can really be. I don't need to be informed that people have sex in gritty hotel rooms or that there are unhealthy unsavory people in gritty places. This is what hollywood thinks puts them on the 'Cutting edge'. The effect it has on me is the same effect as having to use a bathroom in an old dirty truck stop somewhere in the middle of nowhere. This something I might be forced to do but I don't have to watch this crap and I won't. I feel I should be refunded for the hour I wasted on it.

The recent thing they've been doing in the remakes is to have some rivalry or tension between the detective and the cops. Which serves to allow the actors to show their acting chops. For me It's just a distracting annoyance. Most of it has nothing to do with the story.

No, I think I will stick with the David Suchet or Peter Ustinov Piorot, because they are fun, interesting, entertianing. This use to be the reason people made movies.

What's funny to me is that when I saw that John Malkovich was in this I knew it would be something like this. I'm not knocking him, he is good actor, but it's funny how it's so predictable.

UPDATE: Wow, I'm quite stunned by the reaction to my review. I wrote the above 2 weeks ago and haven't even thought of it since. I literally just checked it today. To those who are 5 or 6 paragraphs mad at me, Sorry that you are taking it that way. I fully realize that there are some people who will like this adaptation for legitimate reasons. I'm not one of them and what I wrote above is honestly the way it struck me. Some People like this kind of adaptation. Some people like broccoli, that is really a mystery to me. I love the Agatha Christie stories and I see a lot people agree and like them in the same way I do. I appreciate those commenters.

diana a. wiseReviewed in the United States on February 1, 2019
2.0 out of 5 stars
bad. maybe okay if you don't have anything to compare it to.
I have read all of Agatha Christie's books. I LOVE Agatha Christie mysteries and many of the movies based on her stories. The David Suchet series. The Miss Marple series. The amazon version of Crooked House was very good.
I like John Malkovitch. I like Ruoert Grint.
I did not like this series.
I guess they tried to not go comedic Poirot like Murder on the Orient Express(which I also did not care for, but at least it was a straightforward telling with good effects), and some of the old series with David Suchet is a little campy, but dark and psychological thriller was maybe NOT the way to go. It just loses on so many levels.
Rupert was interesting to watch.
Malkovitch was painful; if I had seen this first I probably would have avoided anything else he'd even been in.
His accent is all over the place. Then the character has no "mustaches", no compassion, no humor or humanity, even his petty vanities which were endearing elsewhere are clunky here.
It's not horrible, it's just the worst of the adaptions, so, to me, who's probably seen them all, it's pretty bad.
622 people found this helpful

sherri goldenReviewed in the United States on February 1, 2019
5.0 out of 5 stars
The reviewer that called this series 'slow, boring & dull'-Perhaps stick with the action genre
Great murder mystery stories unravel - they're not fast paced - and only 'dul'l if you're not picking up on the nuiances. After years of Poirot being portrayed as a light-hearted charicature of a detective, Malkovich brings a depth to the role, and a fresh take that redefines the style and tone of this series or a new generation.
About 35 years ago or I was walking through a studio in NYC and caught a glimpse of Malkovick, then an unknown, reshearsing lines for one of his first roles - and I was memorized. His performances continue to always bring something extraordinary to every role.
If you found the series ''slow, boring and dull' and it's action-packed excitement you're looking for, 'Fast and Furious 9' is coming out soon - and might be a better fit.
441 people found this helpful

CynicalDriverReviewed in the United States on February 1, 2019
5.0 out of 5 stars
Fantastic Old-School Detective Story
This is not your new-age CSI, police procedural that has been done a thousand times on T.V.. This doesn't show you fancy visual effects and fake hacking. There is no inter-agency jurisdiction fighting. No geeks becoming heroes. This is a real character drama. This is story-telling. So, if you lack the patience to bask in the drama and intrigue; if you can't imagine yourself sitting through a show without car chases and gunfights... This is not the show for you.

If you enjoy having your brain worked, emotions stirred, excellent character, superb acting, and wonderful directing without all the fluff Hollywood is so well known for these days... You're in for a treat. The story is expertly crafted and the acting would hold up against many many Oscar winning performances. Malkovich delivers a spellbinding portrayal of Poirot, while the rest of the cast each plays a role. There are very few unnecessary parts here and the story is refreshingly focused. Even Rupert Grint surprised me, which is quite a compliment considering I wasn't particularly fond of how Ron was treated in the Harry Potter movies; though that could have been due to poor directing choices.

A masterpiece that, in my opinion, honors Agatha Christie. You will not be disappointed; unless, of course, you just want to watch another CSI. While there is nothing particularly wrong with shows like that, they lack the depth I really enjoy. They simply do not have the ability to engage on this level because their episodes are too short and seasons too numerous. They have to have filler. The ABC Murders doesn't have filler. It takes me back to when I was a kid... Staying up late at night watching old Sherlock Holmes shows, catching a couple hours of sleep, and then waking up to watch Saturday morning cartoons. A time before my teenage life was overrun with video games, high-school, relationships, and texting.
410 people found this helpful

Washington DCReviewed in the United States on February 1, 2019
1.0 out of 5 stars
Dark, Revisionist, Unworthy, and Unnecessary
What was the point of this dark revisionist production? Departures from the novel, references to political climate, focus on all that is joyless, isolating Poirot... This is not entertainment for a Christie fan or others who want to experience more and better than the vanity of this problematic production -- that some may conclude wasted talent, time, expenditures, and opportunity. In my opinion this production is Exhibit A for the case that there is no point to further "adapt" and produce Christie-based films that obliterate her work. What a shame.
261 people found this helpful

MarjReviewed in the United States on February 2, 2019
1.0 out of 5 stars
Poirot's Treatment by Scotland Yard
Agathe Christie would be horrified to watch this "updated, modern" interpretation of her book ABC Murders. There's only one Poirot and that is David Suchet. I disliked the way Monsieur Poirot was treated in this video by Japp's replacement in Scotland Yard! Disrespectful!! Too much implied sex which today's producers seem to think this is the only way that the public will watch! Read the book--much superior!!!!
244 people found this helpful

SeakoReviewed in the United States on February 2, 2019
1.0 out of 5 stars
How was this ever made?
There is little of Agatha Christie’s beloved character of Poirot. It is however reminiscent of the dark depressing last two seasons of the series starring David Suchet. We see a grayish yellow Poirot sad lonely and disrespected. No Hastings or Miss Lemon and we are even deprived of Inspector Japp. It is easy to write dark and dreary. Harder to write with wit and intelligence. How this production got made is the real mystery here. There is no spark the characters are the nastiest crude and disgusting. The pace is set at a dull and dreary depressing rate. BBC made a very bad call here. While some may say I was looking for a version of the old series , I was not. I was looking for the creative spirit of Agatha Christie here. But she too was pushed aside for some writer who had the ego to think they could write better than her. Boring. Laborious. Depressing. Dull.
201 people found this helpful

Amazon CustomerReviewed in the United States on February 1, 2019
4.0 out of 5 stars
Surprising
I had a chip on my shoulder remembering David Suchet's wonderful portrayal of Poirot. Fell into it during the first hour; much darker and deeper than any of the earlier series. No Hastings or Miss Lemon, or pastel Art Deco backdrops. Various
deeply troubled and very human psyches are exposed. Good; unexpected and thought-provoking.
207 people found this helpful
See all reviews
Back to top
Get to Know Us
Make Money with Us
Amazon Payment Products
Let Us Help You
EnglishChoose a language for shopping. United StatesChoose a country/region for shopping.
© 1996-2022, Amazon.com, Inc. or its affiliates