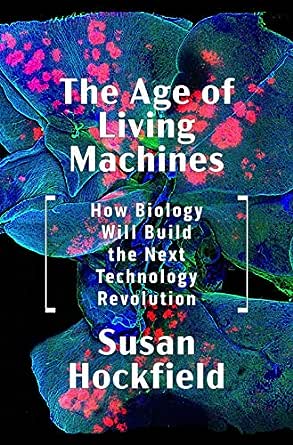 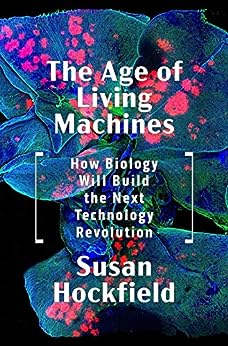 The Age of Living Machines: How Biology Will Build the Next Technology Revolution Kindle Edition

“Entertaining and prescient....Hockfield demonstrates how nature’s molecular riches may be leveraged to provide potential solutions to some of humanity’s existential challenges.”
- Adrian Woolfson, Science

“Susan Hockfield’s lively and authoritative book brings to life the bio-revolution that is coming and that will dwarf the computer revolution in causing disruption―for better and worse.”
- Ashton B. Carter, former U.S. secretary of defense, director of the Belfer Center for Science and International Affairs, Harvard Kennedy School, and MIT Innovation Fellow

“A highly readable and deeply informative look over the scientific horizon into a future where biology and engineering converge to offer extraordinary means to improve our world.”
- Drew Gilpin Faust, president emerita and Lincoln Professor of History, Harvard University

“Beautifully captures the science and the stories underpinning the convergence of biology and engineering as a transformative twenty-first century enterprise. One of those stories―biologically organized batteries―addresses the clean-energy revolution needed for mitigating climate change, capturing both of Hockfield’s signature initiatives as MIT President.”
- Ernest J. Moniz, former U.S. secretary of energy

“Timely, provocative insights into ways the genomic and bioengineering revolution is likely to transform our world in the next half century as profoundly as computer chips powering the information revolution transformed the past fifty years.”
- Graham Allison, Douglas Dillon Professor of Government, Harvard Kennedy School, and author of Destined for War: Can America and China Escape Thucydides’s Trap?

“Life sciences are at the doorstep of meeting the major challenges of our time: energy, food, water, and disease. Hockfield views this future through the eyes of scientists at the interface of engineering and biology in an exciting and enjoyable book.”
- Phillip A. Sharp, winner of the Nobel Prize in Physiology or Medicine, Koch Institute for Integrative Cancer Research at MIT

“An essential book for our fast-moving times. Hockfield covers an immense range of the emerging technologies that will reshape our lives. At the same time, she offers a crucial synthesis, much needed in an age of fragmentation. The result is a powerful reading experience, combining depth and clarity, and offering a generous supplement of hope.”
- Vartan Gregorian, president of Carnegie Corporation of New York

“Vibrant and accessible....What’s especially exciting about the narrative is that much of the research Hockfield describes occurred as a result of her foresight and tenacity; her vision at MIT was to bridge disciplines in a manner similar to the pioneering work that was conducted at Bell Labs in the mid-20th century....In these uncertain times, Hockfield instills hope for an enriched and peaceful tomorrow. A thrilling, insightful, and highly readable work of popular science.”
- Kirkus (starred review)

“Data-rich yet accessibly written....Hockfield does a superb job of sharing the excitement and challenges associated with scientific investigation, while making the prospect of an impending 'era of unprecedented innovation and prosperity' seem that much more plausible.”
- Publishers Weekly

“Efficiently weaves in previous scientific discoveries and breakthroughs, current research, the mechanics behind each project, and engaging profiles of the individuals―engineers, physicians, botanists, inventors, and entrepreneurs―who are leading the way....A refreshing celebration of exciting things to come.”
- Booklist --This text refers to the hardcover edition.

Susan Hockfield, Ph.D., president emerita and professor of neuroscience at the Massachusetts Institute of Technology, was the first woman and first life scientist to lead MIT. She is a member of MIT’s Koch Institute for Integrative Cancer Research, and lives in Cambridge, Massachusetts. --This text refers to the hardcover edition.

4.0 out of 5 stars
4 out of 5
27 customer ratings
How does Amazon calculate star ratings?
Amazon calculates a product’s star ratings based on a machine learned model instead of a raw data average. The model takes into account factors including the age of a rating, whether the ratings are from verified purchasers, and factors that establish reviewer trustworthiness.
Top Reviews

Better Yeti
2.0 out of 5 stars Vanity publication
Reviewed in the United States on September 7, 2019
Verified Purchase
How many times does Hockfield have to mention that she was the president of MIT? Because the very first sentence of Chapter 1 hits you over the head with it, and really doesn't cease. Ever. Is she really that needy, insecure, and institution-bound that we won't take her seriously unless she mentions -- once again, tediously, eye-rollingly -- that she was the president of MIT? So, yeah: even though she lays out the biotech futurism panorama pretty well, you never really get far away from the idea that this book is first and foremost about resume-building, and only secondarily about informing and enlightening a paying audience. George Church's Regenesis is very much in the same genre, but so much better-written and informative. Takeaway: this isn't a bad book, it just isn't great. And if I hear Hockfield announce she was president of MIT one more time, well, I'll scream.
Read more
10 people found this helpful
Helpful
Comment Report abuse

CorpGovNet
VINE VOICE
4.0 out of 5 stars Informative Quick Read
Reviewed in the United States on June 3, 2019
Verified Purchase
The Age of Living Machines: How Biology Will Build the Next Technology Revolution by Susan Hockfield provides a quick read of what is on the horizon. The former president of MIT believes the convergence of biology and engineering  will be as transformative as the previous convergence of physics and engineering.

Touched on too lightly is where the US stands on comparison to others. Is China Catching Up to the United States in Innovation? Additionally, Hockfield largely glosses over what con go wrong. For example, she appears to sing the praises of glyphosate, although admitting concerns around safety continue. I have long been in favor of the age of living machines, but not of releasing chemical poisons.
Read more
10 people found this helpful
Helpful
Comment Report abuse

Amazon Customer
1.0 out of 5 stars MIT advertisment
Reviewed in the United States on June 15, 2019
Verified Purchase
Tried reading it. Handled maybe 10 pages. I don't think there was a single paragraph and perhaps even sentence without mentioning MIT. If you have a fetish for Technology Institutes in New England this will read like 50 shades of grey. If you don't -- don't read this book.
Read more
13 people found this helpful
Helpful
Comment Report abuse

Rodrigo Silva
5.0 out of 5 stars Enlighting Page Turner
Reviewed in the United States on May 10, 2019
Verified Purchase
The description of six technologies that are being deployed enlightens a convergence between different scientific fields. Ideas are elegant, profound and understandable by the lay man.

Once I begun reading, it was impossible to not stop until the end, a whole new tendency that will tackle the daunting problems that we are facing in this 21 century is exposed.
Read more
8 people found this helpful
Helpful
Comment Report abuse

jonathan latham
1.0 out of 5 stars Undone by its premise
Reviewed in the United States on May 11, 2019
This book, like many others, treats organisms as if they were machines. They are not machines. You can treat horses, pigs, humans, trees, indeed all life as machines though, and wish they were, and fantasize about the control over them that could theoretically be achieved by hooking them up to electronics, and always be on the supposed cusp of a breakthrough, if your paradigm of biology is that organisms are really machines. But are they? Neither Susan Hockfield nor anyone else has ever shown that they function like machines. We just call them machines because it's the only metaphor we have. Not because its true. The result of the machine metaphor is dysfunctional biology and scary politics. Ask yourself: am I a machine? Or am I better than that?

For real thinking on this read Robert Rosen "Life itself", and if you are not ready for that read "Lifelines" by Steven Rose, which is an excellent start. The coming revolution is not organisms becoming machines it is organisms reclaiming life.
Read more
28 people found this helpful
Helpful
Comment Report abuse

Madelyn Blair
5.0 out of 5 stars Pure Inspiration for Non-scientists
Reviewed in the United States on March 23, 2020
Verified Purchase
I think that every teenager struggling with what to do with their lives should read this book. If they have any bent toward science, this book will inspire them. It presents concepts in understandable language and adds clear linkage to how the discoveries might be, will be, or are being used. Reading it today as a sociologist, I felt welcomed. Had I read it as a teenager, I might have stayed with mathematics (where my studies began), because I would have seen how mathematics could work with other disciplines to create something useful.

I've been teaching the value of collaboration for years, because many minds working in collaboration are necessary to reify innovation. Hockfield presents the scientific rationale for doing so through well-written stories that draw you in.
Read more
Helpful
Comment Report abuse

John Batchler
5.0 out of 5 stars U dont want to be around fighting cyborgs
Reviewed in the United States on October 21, 2019
Verified Purchase
Great book how cyborgs r becoming live through the use of unheard of technology but nobody is really thinking the consequences of it hate to be a modern day frankenstein. We dont know what we're getting into
Read more
Helpful
Comment Report abuse

Amazon Customer
5.0 out of 5 stars visionary book
Reviewed in the United States on October 12, 2019
Verified Purchase
Susan Hockfield is a lovely person and this is an excellent book!
Read more
One person found this helpful
Helpful
Comment Report abuse
See all reviews from the United States

vcart
4.0 out of 5 stars Future possibilities
Reviewed in the United Kingdom on September 14, 2019
Verified Purchase
Interesting subject matter looking at future solutions for a range of current issues
Read more
Helpful
Sending feedback...
Thank you for your feedback.
Sorry, we failed to record your vote. Please try again
Report abuse