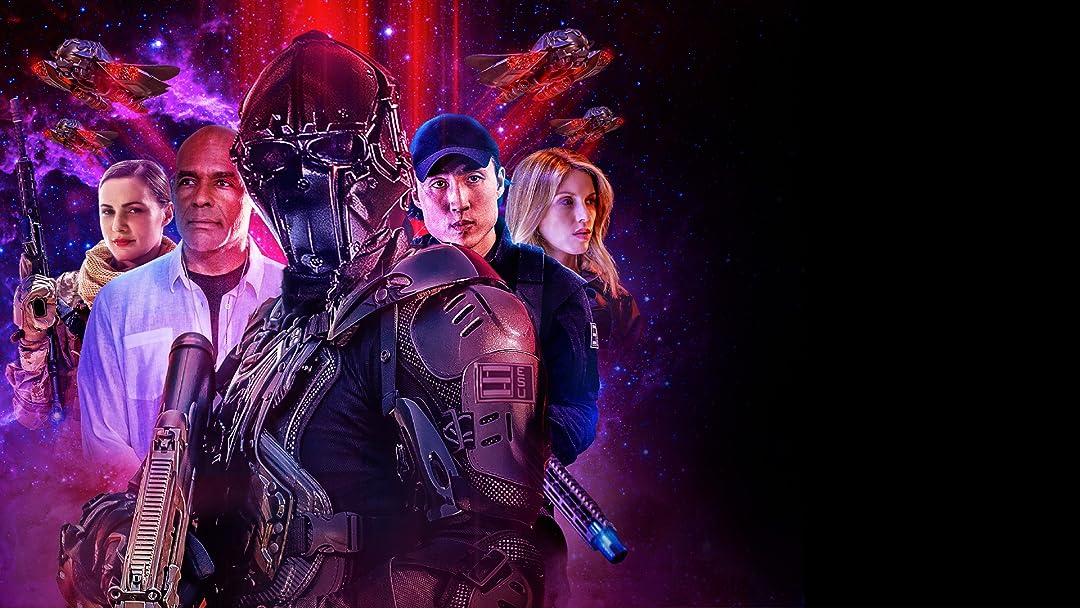 (174)
1 h 26 min2021X-Ray16+
Jim Yung, a rejected CIA analyst, has been exposed to an ancient 'dust' that transforms him into a super soldier that can communicate with aliens. When a secret organization works with him to discover why aliens have returned to Earth, the truth comes at a price.

Amazon CustomerReviewed in the United States on July 9, 2021
4.0 out of 5 stars
Yasuo Teh Halemiu
Verified purchase
In the Beginning, the Earth was an Ocean, where lifeform coalesced, gathered and feasted. In the Transitions, known as Revelation, Mother Earth reveals through women to the people. Here the symbols;

Master - Amyegdala the Brown bull to obey Mother Nature's call, giving life force to the lower plains, feeding the Ocean,
Control Room Runts - Children and humans who disobey the river of life, sacriligious, to kill and eat with no sustenance,
Level 8 Bomb - Sun dies as the womb cannot be healed, protocol of the Sacrifice to guess and know Sig-ma Bet-ah Epsi-long,
Alien's dark matter - To cleanse Her of Her impurities, when life is to be consumed
Women brown hair - fall for power, the calling of ability and power, the "lost sister" as the women who disobeyed,
John and Jim - The double Dragon, Destiny, that Fate must be obeyed
Bluelight lifeforce - The calling to feast and surrender, greed love hate jealousy, the fall of the ill women, the women on her knees with nothing to offer

frank chaseReviewed in the United States on July 17, 2021
2.0 out of 5 stars
Some nice artwork but...
Verified purchase
Once again, a prime sci-fi title with little to recommend it to viewers. It does feature a few nice artwork effects and some low budget FX stuff, and a couple of the actors knew what they were doing, but the rest were either confused or lacked experience. Also the 'plot' was a little thin. It had a few passable scenes, but was mostly a snoozefest. Listed as '3 stars' for no apparent reason.
4 people found this helpful

Andy KoenigsbergReviewed in the United States on August 9, 2021
1.0 out of 5 stars
This movie confusing, stupid and ultimately, non-sensical
Verified purchase
Where to start, the acting was awful. The beginning had no context. The hero seemed indestructible, even after being stabbed. His girlfriend betrays him for no reason that makes sense, then sacrifices herself for him. This is an hour and a half of my life I cannot get back. For the rest of you, don't waste your time.
5 people found this helpful

Alex CReviewed in the United States on August 21, 2021
2.0 out of 5 stars
Do no waste your time
Verified purchase
It is not the worst movie on earth but I can't even say anything good about it. Considering that this is low budget movie, that's fine but then it should be scaled to the budget with emphasis on good acting and good characters set. Also seems like woke politically correct with everything. Pretty annoying.
4 people found this helpful

GreystokeReviewed in the United States on January 15, 2022
2.0 out of 5 stars
Crikey.....
Verified purchase
It could have been worse. It could have tried to find a way to tie in Global Warming/Cooling/Change/Stagnation or a segment on how to Save The Polar Bears or some such drivel. For leaving that out, I gave it a second star.
Short, as in VERY short segments of disjointed, entirely unattached action coupled with hyper-trite mysticism held together with abysmal acting and worse dialogue.

Instead of watching this" Do drugs, really heavy, horrible drugs. At least from that there is a hope of getting clean and sober again.
After this "movie"... there is no hope. I am now a wraith in the same vein as the 'Nine Princes of Amber' style, or as an Orc would be if it got lost in a different dimension.
Crikey! what have I done to myself by watching as much of this as I did?

Kindle CustomerReviewed in the United States on August 3, 2021
2.0 out of 5 stars
Slow, and not very revealing
Verified purchase
starts with off with an action scene, you fined there is someone kind of alien in humans. Switch to a guy who is "dreaming"?? , fine out he's got the effects of the alien in him, semi-super soldier, at a hidden training base.
It's a slow moving story, back-flashes of his early life mixed with other stuff, I fast forward through 1/3 of the movie, the ending was set up for a second movie.
2 people found this helpful

Discerning ReaderReviewed in the United States on October 1, 2021
1.0 out of 5 stars
I could not finish this movie
Verified purchase
Agent Revelation just did not work for me at all. Admittedly, I only watched about the first half-hour, but that was enough for me to see the very poorly done special effects, the lack of introduction of characters, or anything like character development. No real set up, or explanation, and an incoherent plot. Maybe I missed something, but I turned it off. I suppose it might be get better later in the movie, but I did not want to waste anymore time on this one.
My grade. F
One person found this helpful

Spence Reviewed in the United States on February 17, 2021
3.0 out of 5 stars
Not a bad B flick
Verified purchase
It is a B flick and that says it all.

I've seen a lot worse in the theater and this was no doubt a good stepping stone for everyone involved to get experience in their trade.

The only real issue appears to be people that seem to think every movie has to be compared to multi-million dollar block busters.

For what it is, it is a good movie.
5 people found this helpful
See all reviews
Back to top
Get to Know Us
Make Money with Us
Amazon Payment Products
Let Us Help You
EnglishChoose a language for shopping. United StatesChoose a country/region for shopping.
© 1996-2022, Amazon.com, Inc. or its affiliates