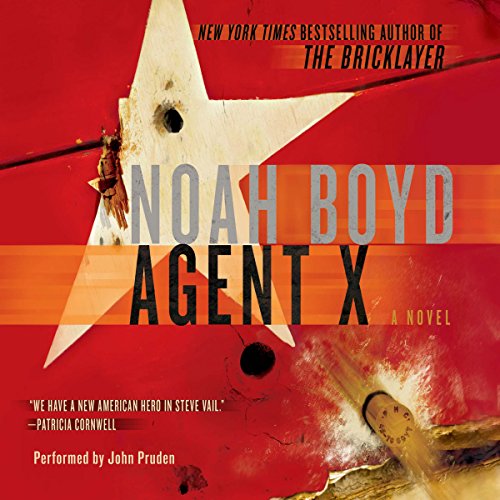 Ex-FBI agent Steve Vail navigates a maze of hidden codes and brain-teasing puzzles to stay hot on the trail of a band of Russian spies in this breathtaking follow-up to his New York Times best-selling debut The Bricklayer.

FBI-agent-turned-bricklayer Steve Vail once helped the FBI solve a brilliant extortion plot. It was supposed to be a one-and-done deal. But when he's in Washington, D.C., to see Kate Bannon—an FBI assistant director—on what he thinks will be a romantic New Year's Eve date, suddenly things get complicated. The FBI has another unsolvable problem, and it has Vail's name written all over it.

A man known as Calculus, an officer at the Russian embassy, has approached the FBI claiming that he has a list of Americans who are selling confidential information to the Russian SVR. In exchange for the list, he is asking for a quarter of a million dollars for each traitor the FBI apprehends. But then Calculus informs the FBI that he has been swiftly recalled to Moscow, and the Bureau suspects the worst: the Russians have discovered what Calculus is up to, probably have access to his list, and will be hunting the traitors to kill them unless the FBI can find them first.

The FBI realizes that it has to keep the operation quiet. Once again, Vail is the perfect man, along with Kate Bannon, who would be anyone's first pick for help on an impossibly dangerous case. But finding the traitors isn't going to be easy. In fact, it's going to be downright deadly. And if the Bricklayer survives, he will have to come up with a few tricks of his own.

Agent X is a heart-pounding thrill ride with an authenticity only a writer who's an FBI veteran can provide, and Steve Vail—a man Patricia Cornwell calls a "new American hero"—is one of the smartest, toughest, and most compelling new characters to come along in many years.

Your audiobook is waiting!
Learn more about membership
List Price: $28.51
You Save: $6.56 (23%)
By completing your purchase, you agree to Audible’s Conditions Of Use
Sold and delivered by Audible, an Amazon company

Too bad this was the last book.
Read more
3 people found this helpful
Helpful
Report abuse

Christy T
5.0 out of 5 stars Great page turner!
Reviewed in the United States on April 6, 2013
Verified Purchase
When I read Noah Boyd's first book....The Bricklayer, I thought it must be a fluke for an unknown author (to ME! LOL) to have written such an incredible book!!!!! As soon as I saw he published Agent X.....I immediately bought it and started reading it when I got it. It took me a while to get through because I have a full time job and just can't sit and read a novel in a few days like I used to! There were nights I had to FORCE myself to shut this book and go to bed so I COULD get up and go to work the next morning! It is a page turner......and has such a great plot with so many twists and turns. If you love spy novels, page turners, mysteries, and "I can NOT put this book down until I get to the END!" types of stories........GET THIS BOOK NOW!!!!!!!!!!!! I am already salivating at the prospect of this author writing another book!!!!! He has jumped to my top 5 favorite authors! Highly recommend putting this one on your I MUST READ THIS TODAY list!
Read more
One person found this helpful
Helpful
Report abuse

Nelson Banuchi
3.0 out of 5 stars Fun Read!
Reviewed in the United States on December 23, 2021
Verified Purchase
Noah does it again! What a fun read! The dialogue, especially between Vail and Kate, is amusing, sometimes hilarious. And, yes, there are twists and turns and, just when you think it's over and nothing else can be said, it twists and turns one last time.
Read more
Helpful
Report abuse

ArchEtech
5.0 out of 5 stars Fantastic book
Reviewed in the United States on March 10, 2011
Verified Purchase
Steve Vail is the next Jack Reacher. I say that only because I've been searching for another series with a similar character and writing style as Lee Child's Jack Reacher Books as I've read all of them. This book series has the same lone wolf type of character who with smarts and brute force does whatever he has to do, to do the right thing. Even if that means breaking some rules!

The plot is on par with the more complicated and witty of the Reacher series but definitely with a style and story line of characters all it's own. If you read the series of books by Lee Child, Vince Flynn, Brad Thor, AJ Tada etc, you will love this series. Start with the Bricklayer...
Read more
7 people found this helpful
Helpful
Report abuse

Phil M
5.0 out of 5 stars Positives Far Outweigh Any Negatives
Reviewed in the United States on August 12, 2013
Verified Purchase
I had purchased Bricklayer a while ago and it was in my TBR pile. I wanted a quick read and it turned out to be that- I couldn't stop reading it. All thrillers have their aspects that aren't believable and there were those in Bricklayer. But the dialogue between the main characters was so crisp and humorous I had to try Agent X. While the puzzles continued to be a weaker part of the book, the interactions were even better and advanced the characters. If it was just a repeat of Bricklayer this would have been the last I'd have read of Steve Vail. But as long as these strong parts continue and the puzzles remain in the background I'll read the next in the series.
Read more
One person found this helpful
Helpful
Report abuse

Kindle Customer
5.0 out of 5 stars Ok... I'm hooked
Reviewed in the United States on January 17, 2022
Verified Purchase
I thoroughly enjoyed reading this book and the "Bricklayer". It's obvious to some of us that Noah Boyd was a great street agent.... a high compliment in this day and age.
Read more
Helpful
Report abuse

Lisa Baker
3.0 out of 5 stars Doesn't seem like the old Steve Vail
Reviewed in the United States on September 20, 2011
Verified Purchase
BRICKLAYER was one of my favorite reads last year so I was really interested in reading AGENT X.

I am not sure what happened with this book. The story, pushes the limits of fiction so extremely that it seems almost contrite. The old stoic Steve is almost a chatterbox especially in dealing with the deputy director, aka his wannabe girlfriend. The bantering is constant and takes away from his "cool" character. Its like Jack Reacher suddenly telling jokes. This wouldn't be a bad thing but it is so completely out of character for Vail, or the old Vail (the one I loved in Bricklayer).

I did like the "follow the clue" concept but even that got old by 3/4 of the book. Don't get me wrong, this is an ok book and I finished it, I was just so surprised what happened to the characters personalities in this book that I found it distracting to me.

Many people loved this book and maybe my harsh review is because I was so IN LOVE WITH THE LAST BOOK that, perhaps, I was set up for disappointment. If this is a new author for you, by all means read the Bricklayer first, I thought it was so much better.

With that said, I will still be reading the 3rd book as I really have to see if the old Vail is back.
Read more
Helpful
Report abuse

Kindle Customer
4.0 out of 5 stars Very Very Good
Reviewed in the United States on February 27, 2014
Verified Purchase
I finished the Brick Layer very pleased with the whole package. The story, the plot, the characters and the ending. So, I jumped directly into Agent X.

Again everything was satisfying, the book is a success.

Some of the jumps from clue to solution were hard for me to follow. But the constant twists and turns were part of the charm of the main characters. There are few slow interludes in these pages. You will need to have a lot of energy to keep up with the action. But it is worth the ride

r murray
1.0 out of 5 stars Be careful you haven't already read this
Reviewed in the United Kingdom on September 15, 2017
Verified Purchase
One star doesn't do the book justice as it is a great sequel to "the Bricklayer" unfortunately it is the American title for "Last Chance To Die" which I have already read and would give 5 stars to. I thought I was getting the third Steve Vail book from Noah Boyd, my mistake? I do not see any indication that they are the same book with different titles.
Read more
One person found this helpful
Report abuse

Sue Thomas
5.0 out of 5 stars 5 stars
Reviewed in the United Kingdom on April 25, 2016
Verified Purchase
Noah Boyd? 5 stars no problem. I'm saving this book, like you save a favourite bar of chocolate, until a perfect time to relax and savour.
Read more
Report abuse

mikado
5.0 out of 5 stars mikado
Reviewed in the United Kingdom on April 19, 2011
Verified Purchase
This was a birthday present for my husband and he enjoyed reading it very much He is looking forward to more Noah Boyd releases
Read more
Report abuse