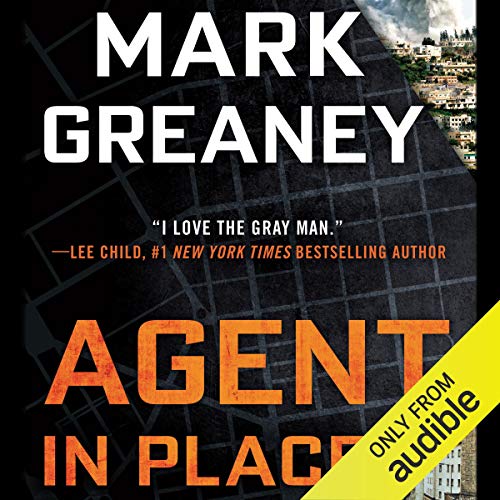 List Price: $39.95
You Save: $4.96 (12%)
By completing your purchase, you agree to Audible’s Conditions Of Use
Sold and delivered by Audible, an Amazon company
Share

4.7 out of 5 stars
4.7 out of 5
2,200 global ratings
How are ratings calculated?
To calculate the overall star rating and percentage breakdown by star, we don’t use a simple average. Instead, our system considers things like how recent a review is and if the reviewer bought the item on Amazon. It also analyzes reviews to verify trustworthiness.
Top reviews

Also, he barely mentions the gear that the characters in the book use, which he had done a masterful job of in his prior books in this series. Always nice to know what gear is getting the nod from the action boys, that Greaney interviews.

In this novel, our Gray Man, has no romantic involvements and his two women from the prior book are mentioned only in passing.

To me the plot was a little thin, but with action novels one does not expect a lot, but I had gotten used to more in the last few books in this series.

The plot is pretty straight forward - the Gray Man is hired to "rescue" the mistress of the leader of a Middle-Eastern country, so, she can be used to help bring about regime change - which of course goes totally sideways and ends up with "our hero" having to travel to the Middle-East on another rescue missing, plus more.

The Gray Man is as close as we can currently get to a real "Matt Helm" type of character, but still it was bothersome for the Gray Man to be moralizing about the tactics used by some of the military contractors.

If you are into the series - you have to buy this one, just to stay current. If you are not into the series yet - buy them all and read them in order of publication.
Read more
10 people found this helpful
Helpful
Report abuse

Robert James Vandevoort (Ahwatukee, Arizona)
5.0 out of 5 stars A Novel Written in Real Time
Reviewed in the United States on March 21, 2018
Verified Purchase
500 pages. Exactly 500 pages of intense action that made this book difficult to put down. For this reader, this was the first book read by author Mark Greaney. The writing was incredible and realistic. “Agent in Place” is the 7th book in a series about the Gray Man, Court Gentry, who was a former Christian-In-Action, who continues to provide services to the Agency, as well as his own contract assignments. His assignments are frequently assassinations.

Supporters of the Free Syrian Army are in exile in Paris. They are well funded and are focused on bringing down Syrian President Ahmed Azzam (aka Bashar al-Assad). They learn that Ahmed has a mistress, who is a Spanish model and modeling in Paris. Arrangements are made with Court Gentry to kidnap Bianca Medina, as they know that she knows about a meeting taken in Tehran, that should the Russians discover, perhaps would end the dictatorship of Ahmed.

Court is successful in the kidnapping, only that it was not easy and was most certainly bloody. At the same time the wife of Ahmed, Shakira al-Azzam (Asma al-Assad) is having an affair with her Swiss financial advisor, and he is a dangerous man that is wanted throughout Europe. Shakira learns of her husband’s mistress and wants Bianca killed while in Europe. The Free Syrian supporters in Europe learn that Bianca has a son, by Ahmed, in Damascus and refuses to help their cause, unless her son can be brought to Europe.

For this reader, reading this novel, it felt like being back on the streets of Damascus. And, what is most interesting is that this novel is in real time, in that the war being fought by several groups is realistically written. It is today’s news. Prior to writing the Gray Man series, Mark Greaney had coauthored the late Tom Clancy novels. While this reader has thoughts about franchising a dead man’s name for novels, Mark Greaney, in his own name, is simply an exceptional writer of action & adventure novels. Time to go on Amazon and order the six previous Gray Man novels.
Read more
9 people found this helpful
Helpful
Report abuse

helen
5.0 out of 5 stars Timely, suspenseful ..another great Gray Man adventure
Reviewed in the United States on February 28, 2018
Verified Purchase
"Here we go..." I won an advance copy of "Agent in Place" and devoured it! Set for the most part in Syria, the story is not only compelling, it mirrors current events and actually helped me understand the dynamics of the Iran, Syrian, Russian connections. "The Gray Man" series never disappoints. I love Court Gentry because he never takes himself too seriously but conveys the requisite seriousness for an "action hero." Great read. You will not want to put the book down!
Read more
12 people found this helpful
Helpful
Report abuse

Susan1
5.0 out of 5 stars “The Monster of the Middle East!”
Reviewed in the United States on June 21, 2019
Verified Purchase
The Syrian civil war is controlled by Ahmed al-Azzam and his wife, Shakira, also know as “First Lady of Hell”. They both seem to be without souls, each having affairs, and raping their country of money, and killing 500,000 of their countrymen. It is a multifaction war with many people trying to stop it, help the victims, or even just benefit from it. Chaos and killing. When the mistress of Ahmed goes to France to participate in a modeling show, The Gray Man is hired to kidnap her. He has no idea what a mess he is
getting into! He is asked to do the impossible over and over again.

This is an amazingly believable story with wonderful complexity and characters. The Gray Man is a hero with values and a conscience. He never gives up. Some of the dialogue is clever and funny when appropriate. Lots of surprises and twists will keep you reading into the night. An exciting and suspenseful read!
Read more
3 people found this helpful
Helpful
Report abuse
See all reviews

mikeyb
5.0 out of 5 stars but like the childs mother in danger of assassination by forces ...
Reviewed in the United Kingdom on March 28, 2018
Verified Purchase
I knew of Mark Greaney through his co-authoring of Tom Clancy novels and chanced upon 'Backblast' followed that with 'Gunmetal Gray' and then jumped to 'The Gray Man'. Whilst there is a progression I came to Mark's hero in Court Gentry AKA 'The Gray Man' haphazardly, but I am hooked.
The latest 'Agent in Place' sees our hero pitted against the sadistic Syrian regime whilst out to rescue a child, a child born to the Syrian Presidents girlfriend, but like the childs mother in danger of assassination by forces working for the Presidents wife. Enter all the problems associated with multiple factions fighting for example ISIS, The Syrians and Syrian freedom forces amongst others. The battered landscape, the brutality and the numerous problems facing our hero make for a superbly crafted thriller. 'The Gray Man' series is highly commended and whilst each book is 'stand alone' I recommend reading them progressively. Like me you will soon get hooked
Read more
Report abuse

healthysean
4.0 out of 5 stars Another Hit From Greaney
Reviewed in the United Kingdom on June 22, 2018
Verified Purchase
Thank you to Net Galley, The publishers and to Mark Greaney for an honest review, which is easy as I love these books.

In all honesty I have not read all "Gray Man Books", but read a few and love this character. I believe the more you read in a series, the more you enjoy the character as you understand his/her personality.

Court Gentry is back in action. The Islamic State group is about to execute Courtland Gentry—the Gray Man—and leave his body floating with others in a bloody lake!!

One week earlier.... Gentry is ex-CIA, now an assassin for hire. He meets in Paris with Dr. Tarek Halaby, head of the Free Syria Exile Union, or what’s left of it.

Court goes after the baby, a decision that comes at the price of the mistress's life. The expat organisation deems the boy now useless to their cause and refuses to protect him against the Syrian first lady and the notorious Swiss assassin in her employ, a rather nasty character,with no support on the way, Court realise's he'll have to take down the Syrian president himself if he and the boy and the nanny are going to make it out alive...

Somehow, Greaney cranks out yet another great thriller. That’s a lot of action for the Gray Man and plenty of thrilling suspense, tension, great selection of characters.

Yes lots of pages, but lots and lots of story, action and locations, and of course lots of loose ends...

john rimmer
2.0 out of 5 stars Disappointing
Reviewed in the United Kingdom on April 9, 2019
Verified Purchase
The earlier Gray Man books were terrific - spare, serious, genuinely original. Latest is similar to lots of thrillers on the market - wordy and long winded. Didn't finish it whereas earlier ones totally unputdownable.
Read more
Report abuse

Michael Nolan
5.0 out of 5 stars Another winner
Reviewed in the United Kingdom on June 11, 2019
Verified Purchase
The storyline becomes more complex with each subsequent book but this only adds to the enjoyment. Incredibly fast paced with any number of twists and turns. A great read.
Read more
Report abuse

nige_h
5.0 out of 5 stars Gripping read
Reviewed in the United Kingdom on June 23, 2018
Verified Purchase
Another triumph of this genre - Mark Grearney is clearly a master of his craft. From the first page to the last the story goes you and holds you in fir a roller coaster ride. Highly recommended.
Read more
Report abuse
See all reviews
Back to top
Get to Know Us
Make Money with Us
Amazon Payment Products
Let Us Help You
EnglishChoose a language for shopping. United StatesChoose a country/region for shopping.
© 1996-2021, Amazon.com, Inc. or its affiliates