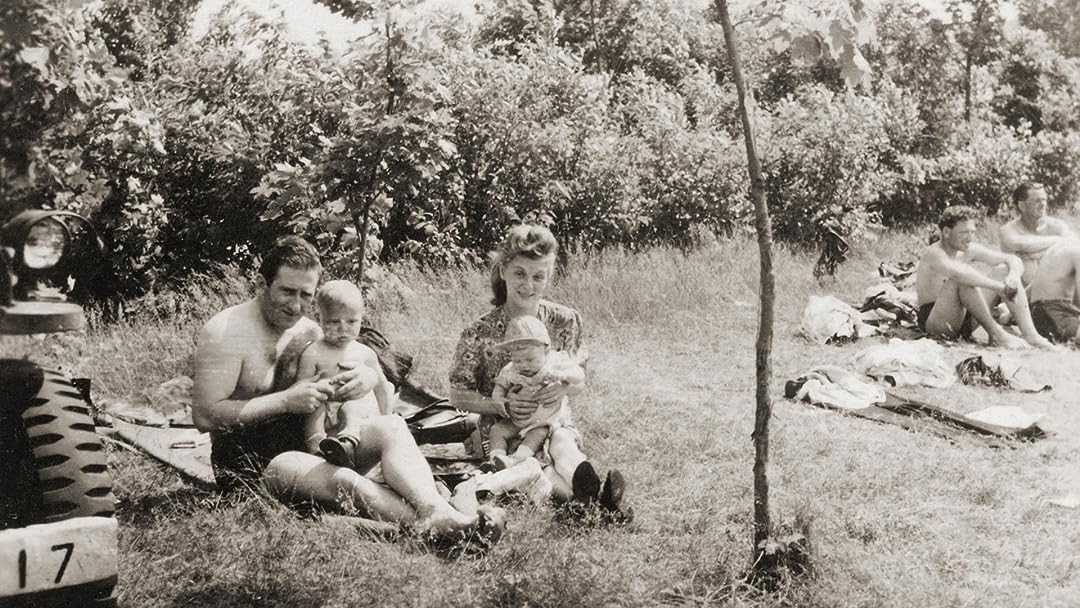 (86)
6.91 h 35 min201713+
A web of family secrets unravels in this documentary about two brothers, Izak and Shep, who were born inside the Bergen-Belsen displaced persons camp in 1945 and separated as babies, never told of the other's existence. Nearly 70 years later, the discovery of family records leads the brothers to an emotional reunion with their elderly mother, Aida, who hid more from them than just each other.

jaslReviewed in the United States on May 14, 2019
4.0 out of 5 stars
I'm sure it's not ez being beautiful esp. at a young age...
Verified purchase
Idk what people think is so great about being so lovely a woman, but a girls age at initial sexual intercourse is significant and often foreshadows the future. Being fairly young with young boys, she was at a misfortune, but each time she tried to make good of the situation. I think she was a brave young woman who knew her capabilities, and liabilities, etc., so decisions must be made. In those days options were very limited. Sometimes a woman has little control over what happens to her sexually. Even some older children in that time period were unaware that sex and love have separate definitions and outcomes. Who protected her? This woman is also a victim of terrorism, in war time...She was an absolutely beautiful girl without protection and things happened to her. Including having to face her shame yet again in her old age. Who lives w/o that isn't human, but one who can love in spite of such trauma is a walking miracle.
22 people found this helpful

Amazon CustomerReviewed in the United States on July 9, 2019
5.0 out of 5 stars
what the ravages of war does to family.
Verified purchase
This woman went through hell. At 14 sent to another country, because she was blond it sounds like she didn't go to the camps, but was in German homes where abuse was sure to happen.....I'm surprised she wasn't in the german baby making program, which at this moment the name escapes my memory. She survived, but I don't think she thrived. She had a look of just existing. But she did try to find safe places for her children, even the third child. She made a "deal with the devil", knowing that one father wouldn't take responsibility for Isaac, sorry for the english spelling, the second man took his son, thank God he didn't have a problem with his blindness, Aida knew he was in love with that woman, who converted and raised Shep as her own, Aida knowing this thought, a woman alone with 2 kids, one may be non jewish, what do I do? Make sure they have a safe place for the both of them. She in her own words, "did the best she could". I sure as hell won't judge her, I am sorry for the grief and torment of not only the war but for the rest of her life. It is the women and children left to pick up the pieces from war to try to move on. God bless the all.
19 people found this helpful

RubyCReviewed in the United States on May 20, 2019
3.0 out of 5 stars
See Review
Verified purchase
(Spoiler Alert) This was initially confusing. We are told Izak was sent to Israel by himself as a toddler, and not told why until the end of the story. I am sure they did that in order to create some drama and suspense, but instead it was just irritating and confusing. And as for the "mother", I was like WHAT??? She sends one child to Israel, we don't find out she tried to immigrate and join him but was turned down as being non-Jewish until later, and looks him up as an adult. The other, she abandons to his father, and we're told he is blind, and she never tries to look him up, even as an adult! And I understand she might not have been able to care for him as a child, but why did she never look him up as an adult? And then at the end, we find she had yet another child in Canada that she put up for adoption! I understand she went through hell at a very young age, and that it was hard for a woman to support even herself, much less a child too, in those days, but my god the heart ache she caused those children! Those 2 brothers who finally found each other are much more forgiving than I ever could have been!
14 people found this helpful

Julia JanzenReviewed in the United States on July 28, 2018
4.0 out of 5 stars
Hoping for a part 2 to this story.
Verified purchase
This was a fascinating story but I just felt it ended abruptly without any real resolution. I'm sad for the brothers that didn't hear from their own mother the full story of her life and why she made the decisions she made. I hope the older brother finds out through DNA on ancestry.com or somewhere who his father is and then they continue on with this documentary. I also hope the third brother at some point understands and decides to meet his brothers. They seem like charming men and anyone would be lucky to call them brother.
23 people found this helpful

John HerschelReviewed in the United States on July 3, 2019
5.0 out of 5 stars
One of the Very Best Family History Documentaries
Verified purchase
If you are looking for a story with a neat and tidy resolution in which every mystery is clearly answered, this is not the documentary for you. If, on the other hand, you are looking for a deeply moving, sincere, and gripping look at a family discovering one another and trying to understand a hidden and often hurtful family history (in this case in the wake of WWII and ripple effects felt across the decades following), then this is truly one of the best such documentaries ever made. The story-telling and film-making is superb. I second the reviewer who said that she or he wished for a follow-up; even an article written by the brothers would be very interesting. Deepest thanks to the brothers and their families for being willing to open themselves and their story to the world.
13 people found this helpful

Candid OneReviewed in the United States on June 5, 2020
5.0 out of 5 stars
Where is the compassion?
Verified purchase
I admire Alon Schwarz for trying to share but one horrific story due to the Holocaust.
Izak does seem to be the wonderful brother with depth of understanding and grasp of what is something so deeply terrifying to a very young girl going through the war might be dealing with.
I cannot like Shep. I can certainly sympathize with his pain up to a point but how dare he think that HE is the only one to have suffered. He seems only to think about his own pain. His mother endured what many young and very innocent girls endured. He lacks empathy as do a couple other of the participants who never mention what horrors Aida tried to bear alone. I found it deplorable how he backed his very elderly mother into a corner that he need not have done. Once he had information on his second brother, he could have found him without putting his mother in such a vulnerable state. A**H***!
Izak seems to have been given a very fine upbringing and knows that love is the ultimate goal. Shep seems not only like a big lug, he seems like a person without many redeeming qualities. He's loud, childish, foolish and CRUEL.

UrennaReviewed in the United States on August 6, 2018
5.0 out of 5 stars
The Right to Forget
Verified purchase
Aida’s Secrets is a touching documentary that radiated deep emotions from her sons, Israeli, Izak, Canadian, Szep, and their immediate families. It concerns secrets and discovery about their birth in Europe, during and post-World War II. The brothers and their families initially met over sixty years later. Their mother, still alive, met Izak with his adoptive parents when he was a child.

Aida lived in Canada, and to Izak’s knowledge, she had no idea her youngest son, Szep, lived in Canada too. It’s a heartrending story, as the brother’s, particularly, Szep, try to ascertain if the man she married and divorced fathered them. The brothers will discover a third child was born in 1949, but Aida is unforthcoming. She will not discuss her past and claims not to remember. Aida stated the past is the past. Life at that time was difficult for a teenage Polish girl in Bergen Belsen Concentration Camp. Her sons had a right to know their family ties. Aida had the right to forget.
12 people found this helpful

JenfordReviewed in the United States on June 3, 2020
5.0 out of 5 stars
WWII It F'd People Up
Verified purchase
That was a horrible time to be alive in Europe, a terrible time to be born in Europe but even in my teens in the early 70's there was the unwed mother's home and it was at full capacity always! People ... Society was different, religions ran the world and I'll offend people here but the did a crappy job of it. Everything was a sin, a disgrace, something to hide, some Jews weren't hidden in attics, some were hidden right with their parents and some weren't Jews at all but sent to Israel to be offered lives war mothers couldn't give them. And after the war? There was still shame and dishonor and nonacceptance of beautiful babies born out of wedlock.I'll vote for my politicians who hopefully will take our values into the future without shame of where we came from.
2 people found this helpful
See all reviews
Back to top
Get to Know Us
Make Money with Us
Amazon Payment Products
Let Us Help You
EnglishChoose a language for shopping. United StatesChoose a country/region for shopping.
© 1996-2022, Amazon.com, Inc. or its affiliates