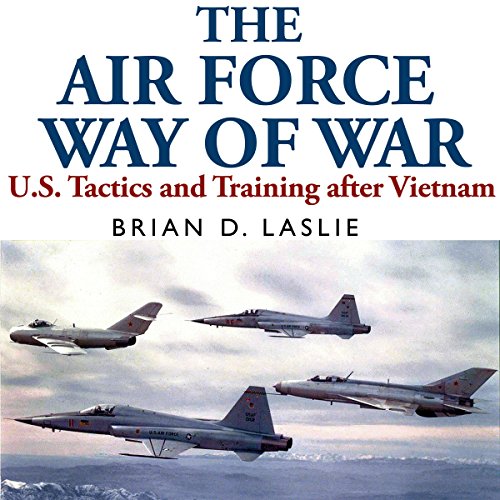 The Air Force Way of War: US Tactics and Training after Vietnam

4.3 out of 5 stars
4.3 out of 5
14 global ratings
How are ratings calculated?
To calculate the overall star rating and percentage breakdown by star, we don’t use a simple average. Instead, our system considers things like how recent a review is and if the reviewer bought the item on Amazon. It also analyzes reviews to verify trustworthiness.
Top reviews

Gregory Paul Adkins
4.0 out of 5 stars Important.
Reviewed in the United States on October 7, 2018
Verified Purchase
Famously it has been said, there are only so many ways to say "Abraham Lincoln was born in a log cabin." In this book we see every variant of "Red Flag changed everything."

But of course that is a very important thing to say. Red Flag did change everything. The Air Force had a tougher time than they should have had in Vietnam. After Vietnam (unlike after Korea) they learned the lesson and stepped up training.

We also read every variation of "Tactical air and strategic air are the same thing" and "Training not technology."

That established, we then go on to read that the Air Force Way of War is to disassemble the enemy air-defense network to establish supremacy before the air-to-ground work can really start.

There are some things the author left out. He makes little mention of the use of drones, either as cruise missiles, or the much-overlooked decoys. He does not give enough weight to the importance of sortie-generation rates, a lesson the Israeli taught us.

He makes not a single mention of air base defense, security, recovery and all that. But then again nobody much does. (The bad guys will exploit that in time.)

You might want to try the free sample first. Most of the theme explored in this fine work are introduced in the first bit. The book ends at the seventy-percent mark to make way for the footnotes.
Read more
3 people found this helpful
Helpful
Report abuse

Kindle Customer
4.0 out of 5 stars Needed history.
Reviewed in the United States on July 12, 2015
Verified Purchase
When I first saw this book I knew that it covered a time of air force history that is rarely covered.
The two flaws in the book were the treatment of the fighter mafia and the creation of the F-16. Both of which I feel he got wrong.
Other then that it was an excellent book and should be on the reading list of any military historian.
Read more
2 people found this helpful
Helpful
Report abuse

Dimitrios
5.0 out of 5 stars Excellent study of how USAF remastered the art of aerial combat after Vietnam...
Reviewed in the United States on July 13, 2016
This excellent study traces the development of the employment of aircraft and aerial training exercises through the eyes of air personnel: from those who flew in Vietnam to those who led and executed operations Desert Storm (1991) and Allied Force (1999). While this work does not ignore the effects or importance of technology, it is not the focus. Along the way, the book emphasizes the roles of individuals and organizations. It also focused on changes in doctrine, tactics, and, most important, training that transformed the operation concepts of the Air Force. This change in training was developed by junior officers, and generals helped it come to fruition. The book explores training programs and schools such as the USAF Fighter Weapons School at Nellis AFB in Nevada as well as large-force-employment exercises such as operation Red Flag, and it notes several specific developments that show why the rise of realistic training exercises helps explain success in the Gulf War.

The book is first a history of how developments in training -most notably those at Red Flag exercises- changed how USAF conducted warfare. Second, participation in Red Flag and other exercises was crucial to the development of the air plan for operation Desert Storm, thus the Red Flag exercise greatly influenced combat planning and execution. The book demonstrated that, just as massive technological development allowed success in the Persian Gulf War, there was an equally important development in the way air power operators and planners conceived of and trained for aerial warfare.

The use of air power throughout the Vietnam conflict was ineffective. Poor organization, weak command and control, and lack of unit of command all contributed to aircraft losses, but these were not as significant as improper training for fighter and bomber pilots. USAF leaders entered the Vietnam conflict believing that the air war in Korea had been an anomaly in that it was neither a conventional war with the Soviet Union in Europe nor an exchange of nuclear weapons. They believed that the tactical aviation, meaning fighter aircraft, could best serve in the role of protecting bombers as escorts or be turned into light bombers themselves. An entire generation of aircraft known as the Century Series was specifically designed to either perform bombing missions or intercept bombers. Air-to-air combat skills became an afterthought. The aircraft in the series could not compete with enemy fighters, were not ideal for air-to-ground operations, and were not adequately prepared to deal with the air defendes of North Vietnam. Even the air-to-air F-4 was designed with a nuclear delivery capability in mind. Training programs for fighter pilots did not emphasize maneuvering to avoid surface-to-air missiles or how to properly dogfight against an enemy aircraft. Since these scenarios were not considered likely in the pre-Vietnam Air Force, they were not addressed in training. The results were almost catastrophic: by the middle of 1965 US fighters were being lost at an alarming rate, more than 12 a month. This amounted to the loss of an entire 18-ship squadron every one and a half months. The loss of aircraft was worrying but the loss of aircrews really devastating. Something had to be done to change the way USAF fought, and the book tells exactly that fascinating story of learning the hard way.

Interwar periods are not devoid of change. During these times USAF prepares for what it perceives to be the most likely future conflicts. After Vietnam, USAF experienced a paradigmatic shift in the way that it conceived of and trained for future wars. It changed its way of warfare and its entire identity. War with the Soviet Union might come, but it would not begin with a massive thermonuclear exchange. Instead, it would begin in Central Europe and be fought, at least for a while, with nonnuclear weapons. In such a conflict, air-to-air combat could tip the scales. The change occurred not only because of advanced technologies but also through human intervention in determining how those technologies would be used. In reality, the changes in training became a trump card against which enemy combatants had no resource. The influence of individuals was always present, if sometimes overlooked, in how USAF changed drastically between Vietnam and Desert Storm and how it still retains its top quality edge. A very informative book on how a military institution learned from its mistakes and how it worked hard to overcome its shortcomings and be the magnificent and invincible force it is today. It is written in a very reader-friendly style and it contains a section of 16 b/w photos. Every fan of modern aviation should read it!
Read more
4 people found this helpful
Helpful
Report abuse

Amazon Customer
5.0 out of 5 stars Great Book! Not at all what I expected
Reviewed in the United States on November 15, 2015
Great Book! Not at all what I expected! I was a tanker pilot in the Gulf War, taught Air Power at the AF Academy, and currently work for Air Force Space Command, so I had some expectations when I started reading this book. I expected a tale of how the synergies of superior technology and the force multipliers produced by space produced an overwhelming advantage that showcased the capabilities of the USAF.
Instead, I got a well thought out lesson on the power of realistic training against an advanced, integrated Air Defense System. I learned the value of bringing together all aspects of an Air Campaign from ISR to Search and Rescue against a rigorous threat, where aircrews die over and over … until they can live.
Better still, it did not read like a history book, but more like a novel about airpower and the airmen of the seventies, eighties and early nineties. Their personal stories brought the times alive, making it an easy and enjoyable read.

Dallas Stephens, Lt Col (USAF Retired)
Read more
5 people found this helpful
Helpful
Report abuse
See all reviews
Back to top
Get to Know Us
Make Money with Us
Amazon Payment Products
Let Us Help You
EnglishChoose a language for shopping. United StatesChoose a country/region for shopping.
© 1996-2021, Amazon.com, Inc. or its affiliates