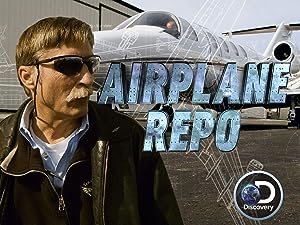 (124)
201313+
Experts are hired by banks to repossess high-end luxury assets from wealthy individuals behind on their payments. From violent altercations with owners, to the dangers of flying possibly damaged planes, the Airplane Repo men - and women- put their lives on the line to get these mechanical giants back where they belong.

Steven HuhReviewed in the United States on December 10, 2018
5.0 out of 5 stars
Very cool airplane aerial shots
Verified purchase
I've searched for movies, TV shows, YouTube vids for footage of aerial shots, but this has a lot of very good quality airplane aerial shots. I'm particularly interested in this because I'm thinking of going into aviation and going for my private pilot license, so the variety of civilian aircraft shown and their being flown are perfect for me. I think anybody interested in getting a private pilot license should be very interested in viewing these series of shows. I can't get enough of them.

Cory JohnsonReviewed in the United States on December 25, 2018
5.0 out of 5 stars
Even better the 2nd time
Verified purchase
We saw Airplane Repo when it was on Discovery and the whole family enjoyed it.
We met Kevin Lacey at OshKosh a couple years ago and reignited my son’s interest in flying and getting his pilots license.

steve millimanReviewed in the United States on July 27, 2019
5.0 out of 5 stars
9 out 10 rating
Verified purchase
Funny show so far

Jackie WallReviewed in the United States on January 2, 2019
5.0 out of 5 stars
Love it!!!
Verified purchase
I love this show. I can and have watched them over and over. Wish there were more.

Joe UserReviewed in the United States on April 5, 2021
1.0 out of 5 stars
One of the dumbest shows ever...
I’m not a big fan of reality TV, but as a pilot for over 30 years, this has got to be the dumbest of them all. The entire show seems staged. No one in that business would hire a “Dog The Bounty Hunter” wanna-be who would draw attention at any airport. A repo guy picks a lock on an FBO hangar to get to the plane, and attempts to “borrow” their fuel truck in order to gas up before he leaves? Then he departs with no radios, navigation, or transponder...using a GPS designed for a car? If an FAA inspector saw this show, these pilots would lose their licenses, unless they could explain that it was all staged and none of this crazy stuff actually happened. If you’re a pilot, don’t waste your time watching this. If your looking for a realistic depiction, this is not it. OMG!

TReviewed in the United States on January 13, 2019
1.0 out of 5 stars
This is not season one of Airplane Repo
I would like refund this is garbage and not what it says it is
Season 1, Episode 1 Best in the Business
First Aired: December 12, 2010

Luxury aircraft are the target in the debut of this reality series, which follows airplane-repossession agent Nick Popovich.

Scott ThompsonReviewed in the United States on April 18, 2019
5.0 out of 5 stars
Reality Repo For Airplanes- Loved It
As a certificated Private Pilot, I enjoy not only the hijinks but also the great planes and boats on this show. Kevin Lacey is especially fun to watch with his rough around the edges attitude and a man that can fix any plane on the fly. Mike Kennedy is also great with his unique pets. Very enjoyable fun for those who love planes, boats and repo reality.
See all reviews
Back to top
Get to Know Us
Make Money with Us
Amazon Payment Products
Let Us Help You
EnglishChoose a language for shopping. United StatesChoose a country/region for shopping.
© 1996-2022, Amazon.com, Inc. or its affiliates