You've subscribed to The Akata Series! We will preorder your items within 24 hours of when they become available. When new books are released, we'll charge your default payment method for the lowest price available during the pre-order period.
Update your device or payment method, cancel individual pre-orders or your subscription at
Your Memberships & Subscriptions
There was an error. We were unable to process your subscription due to an error. Please refresh and try again. 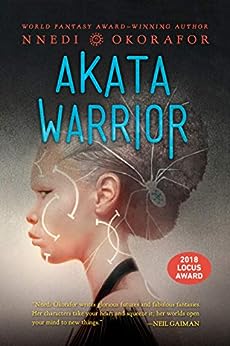 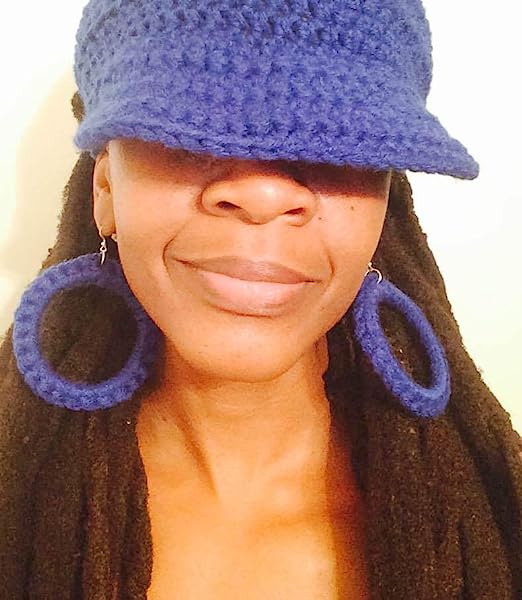 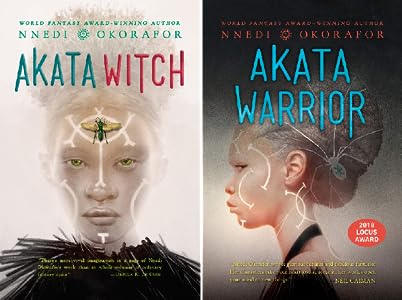 ★ "Okorafor’s novel will ensnare readers and keep them turning pages until the very end to see if and how Sunny fulfills the tremendous destiny that awaits her." —Booklist, starred review

★ "Akata Warrior swiftly synthesizes the lessons and knowledge of the first book into a heart-racing story of resilience and a determination to save the world. This title is a unique coming of age story, coupling the distinct experience of the cultural duality as both African and African-American with lessons of love, loyalty, and the pains of adolescent insecurities." —BCCB, starred review

"The narrative is well paced and multifaceted, taking the reader on a tour of both modern Nigeria and the mystical worlds of the Wilderness (sometimes simultaneously). Along the way, the reader is given a fascinating glimpse into Nigerian culture."  —VOYA

"There’s more imagination on a page of Nnedi Okorafor’s work than in whole volumes of ordinary fantasy epics." —Ursula K. Le Guin, award-winning author of A Wizard of Earthsea

"I always loved science fiction, but I didn’t feel I was part of it—until I read first Octavia Butler, and now Nnedi Okorafor." —Whoopi Goldberg

"The voice of Nnedi Okorafor does not obey the rules of distance, time, or place. Hers is the voice that fuses matter and imagination. She shows us just how close we are to that alternate reality." —Tchidi Chikere, Nigerian award-winning film director and screenwriter

Nnedi Okorafor is a novelist of African-based science fiction, fantasy, and magical realism for both children and adults. Born in the United States to Nigerian immigrant parents, Nnedi is known for weaving African culture into creative evocative settings and memorable characters. In a profile of Nnedi’s work, the New York Times called Nnedi’s imagination “stunning.” Nnedi has received the World Fantasy Award, the Hugo Award, and the Nebula Award, among others, for her novels. Her fans include Rick Riordan, John Green, Laurie Halse Anderson, and Ursula K. Le Guin among others.

Nnedi Okorafor holds a PhD in English and is a professor at SUNY Buffalo. She divides her time between Buffalo and the suburbs of Chicago, where she lives with her daughter. Learn more at nnedi.com or follow her on Twitter @nnedi. --This text refers to the hardcover edition.

4.8 out of 5 stars
4.8 out of 5
809 global ratings
How are ratings calculated?
To calculate the overall star rating and percentage breakdown by star, we don’t use a simple average. Instead, our system considers things like how recent a review is and if the reviewer bought the item on Amazon. It also analyzes reviews to verify trustworthiness.
Top reviews

CLMc121860
5.0 out of 5 stars Enter the Akata World ... if you dare!
Reviewed in the United States on August 21, 2018
Verified Purchase
One indicator that a book is good, well written and has a compelling story is that you become absorbed in its “world.” Such is the case with the Akata Witch series. Advertised to me as the “African Harry Potter” (whose books I love by the way) I found this series to be a fantasy that stands on its own, sans the derivative reference. I kept thinking about the levels of subtext - colorism, sexism, pan-Africanism, sibling rivalry, self discovery, honor, covenant making and friendship and on and on. I found myself wanting to develop a literature course or even a social psychology course around it! Brava! This book is a winner!
Read more
18 people found this helpful
Helpful
Report abuse

M. East
5.0 out of 5 stars Excellent!
Reviewed in the United States on January 19, 2019
Verified Purchase
So well written. You fall in love with these characters. This book is exciting, scary, thrilling and fun. I cant wait for book 3. Plus, I get to learn about different cultures and beliefs. Mystical creatures, African magic, food, peoples, places, etc. So different from my world yet exactly the same. No matter where you go, folks are the same.
Read more
7 people found this helpful
Helpful
Report abuse

Claire
5.0 out of 5 stars This book was even better than the 1st 😩
Reviewed in the United States on October 15, 2017
Verified Purchase
Bruuuuuuuuuh. This book is genius. She weaved together sooo much so eloquently. Love, friendship,danger,adventure,folklore,religion,action,life lessons...*smh* so good. I can't wait for the next installment.
Read more
14 people found this helpful
Helpful
Report abuse

Wiilliam S.
5.0 out of 5 stars Wonderous
Reviewed in the United States on December 7, 2018
Verified Purchase
A magnificent journey of the mind and spirit. This coming to age take of a young woman and her three friends is filled with the insight of multicultural person making her way to knowing herself in a familiar yet strange enviornment. The culture of Africa and specifically Nigeria was a character that enlightened, admonished and caressed the reader. Enjoyable. A must read for anyone.
Read more
One person found this helpful
Helpful
Report abuse

Shay Babb
5.0 out of 5 stars Perfect ending!
Reviewed in the United States on March 7, 2021
Verified Purchase
I feel “full” with this books ending. It left nothing unsaid for me! Everyone came of age perfectly and all learned the lessons they needed. Willing or otherwise.. I loved the uniqueness of this authors work and I am definitely an new fan! This was like Black Panther, meets Lord of the rings, meets Harry Potter... ( and I only say the Harry Potter reference because it is a story of 4 friends)
Read more
Helpful
Report abuse

Tiffany Arnold
5.0 out of 5 stars An amazing end to a beautiful story.
Reviewed in the United States on December 17, 2018
Verified Purchase
Sunny shows us that the things we think are our weaknesses are indeed our strengths. She teaches us to stand tall and listen when the answers are not clear. This book was more than a book, but a lifestyle.

Nnedi takes her imagination and make a place real. I felt while reading like I have been here before. This book is a wonderful piece of art.

Dancer '73
5.0 out of 5 stars Loved it
Reviewed in the United States on September 4, 2019
Verified Purchase
I found myself procrastinating while reading this book. I would read a bit, set it aside, and then go do something else. Almost as if it didn’t keep my interests. But I kept returning to it. I wanted to read it. I didn’t want to put it down once the action began... again, well done. I await the next book... hopefully there is one.
Read more
One person found this helpful
Helpful
Report abuse

K Samana
5.0 out of 5 stars I couldn't love this book more
Reviewed in the United States on December 25, 2017
Verified Purchase
What a wonderful unique story. I can't wait until Sunny's next adventure. In fact, I'd love to see this on the big screen or even the small screen. It's such a complete world full of complicated characters who grow and develop. And although there is some decidedly evil characters, most characters are shades of gray. Making the best decisions they can given their situations.
Read more
2 people found this helpful
Helpful
Report abuse
See all reviews

Amazon Customer
4.0 out of 5 stars Enjoyable but needs time to be digested
Reviewed in the United Kingdom on February 12, 2018
Verified Purchase
This book felt denser than the previous one and I had to read it twice fully grasp everything that happened. I reckon Nnedi has grown tired of being labelled a YA writer and whilst she isn't tackling adult themes I can't see this book as being as approachable for children as the first book. All that being said the book is great Sunny, Chichi and Sasha all get further developed and we learn more about world of the Leopard People. You'll note that I didn't list Orlu and it's because I feel like he didn't get as much attention as the others and seems the least changed from the first book. I don't dislike him being the stable reliable member of the team but let's learn more about him and stop dancing around his relationship with Sunny. I like the development that Sunny's family got especially her brothers who feel like real characters at last. I need answers but this book is merely producing more questions and even in the first book the Leopard People aren't super forthcoming and strongly believe in self directed study. I'm excited for the next book but from the set up in this book it seems like it'll be more complicated not less and might go so far as to require a third reading
Read more
3 people found this helpful
Report abuse

Sheba
5.0 out of 5 stars Great book to read
Reviewed in the United Kingdom on October 15, 2019
Verified Purchase
One of my favourite authors and books now. The author is just gifted in transporting you into the book where you see and feel everything that you read. I truly recommend in buying this book and all her other books.
Read more
Report abuse

Amazon Customer
5.0 out of 5 stars Follow up to Akita witch
Reviewed in the United Kingdom on April 17, 2018
Verified Purchase
Great writer, sucks you right into the story. Fantasy for teenagers and old teenagers (I'm 47!)....will read more, want to read more.
Read more
Report abuse

Georgia
2.0 out of 5 stars The book feels rushed
Reviewed in Brazil on December 15, 2017
Verified Purchase
This sequel does not give enough depth to characters, important events are rushed through, while less important details are described at length. The pace is too quick, which generates confusion. All in all, I believe the author was unable to create a credible parallel magical universe that successfully captivates the reader. The plot is interesting, I just wish it had been better developed.
Read more
Report abuse
Translate review to English
See all reviews