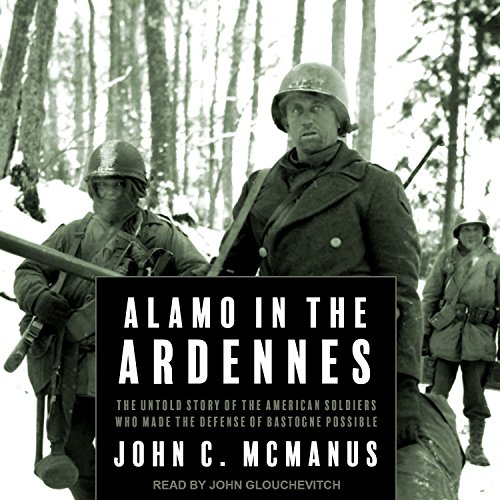 Alamo in the Ardennes: The Untold Story of the American Soldiers Who Made the Defense of Bastogne Possible

4.7 out of 5 stars
4.7 out of 5
251 global ratings
How are ratings calculated?
To calculate the overall star rating and percentage breakdown by star, we don’t use a simple average. Instead, our system considers things like how recent a review is and if the reviewer bought the item on Amazon. It also analyzes reviews to verify trustworthiness.

Richard H. Hall
5.0 out of 5 stars History as it Should be Written: I Could Not Put the Book Down
Reviewed in the United States on January 19, 2016
Verified Purchase
There were many things I really liked about this book. First, it clearly had the rigor of an academic book written by a historian. McManus used a mountain of source materials, including extensive interviews with the U.S. soldiers who fought. Second, he took all these data, including detailed information on when and where action occurred, and weaved them into a story that read more like a historical novel (and I mean that in a very positive way). I felt engaged in the story as if I was one of the soldiers in the battle. I could not put the book down and finished in two days. Third, I have read quite a bit about the Battle of the Bulge, but very little focuses on the first few days when the U.S. forces were overrun, and rarely are these soldiers given any credit for having a positive effect on the final outcome. McManus makes a compelling case that they played an important role. Also very little that I have read about WW2 in general addresses the actual experience of the soldiers in the battle. I would strongly recommend this book for anyone who is interested in the Battle of the Bulge, and/or in the reality of war from the perspective of the men who actually do the fighting.
Read more
26 people found this helpful
Helpful
Report abuse

Marco Polo
4.0 out of 5 stars Proving the case
Reviewed in the United States on September 6, 2014
Verified Purchase
This book chronicles and documents the remarkable stand by the US 28th infantry division and assorted supporting forces in front of Bastogne in the early days of the Battle of the Bulge.

Facing overwhelming odds and often with orders to hold at all costs, the defenders sold their lives dear and bought time for the US 101st airborne division to arrive at Bastogne and set up a perimeter defense.

The lesson of this account is that in war, stubborn defense against impossible odds matters. If panic had been the rule rather than the exception, German forces would have got further, faster, and the whole battle would have unfolded along paths much happier for the Nazis and much more difficult for the Allies.

The book is making a contrarian case of sorts, since the general view seems to have been that the 28th infantry division lost and that its failure is nothing to be celebrated. Any author making a contrarian case has to be meticulous with details and documentation, and this author has achieved this. The price is that the reader may sometimes wish to skip ahead to see how it all ends.

My own opinion had always been more inclined to the author's view and I think he proved his case. Texans do not dismiss Travis, Bowie, and Crockett and their bunch as losers. When you face those kinds of odds, the end is never in doubt. What matters is the price you exact and the delay you impose. Both in San Antonio in 1836, and on the approaches to Bastogne in 1944, the defenders exceeded what rational military calculation would have predicted. Certainly the Germans found themselves way behind schedule in this sector by the time they finally came up to Bastogne.
Read more
23 people found this helpful
Helpful
Report abuse

Kasey
5.0 out of 5 stars WOW best book ever on the battle of the buldge
Reviewed in the United States on January 4, 2021
Verified Purchase
I know the airborne division’s did a great job but the main credit should go to these other units. Unbelievable how they fought with such intestinal fortitude. More books should be written about these units. These brave brave men who fought like they did against such incredible odds. All these men , ones that lived and died shall forever be in my prayers. God Bless them and their families. Best book on the bulge so far. Amazing.
Read more
2 people found this helpful
Helpful
Report abuse

gaosmer
4.0 out of 5 stars Well written
Reviewed in the United States on January 18, 2018
Verified Purchase
19 Dec 1944 I finally got the story about my uncle's capture during WW2. I didn't expect to find it in this book since it is not about the 101st Airborne, but 28th Infantry. It had few problems,. Repeated use of CR instead of CP. HO vice 110. The narration dropped 'and' when there was a need for 'and'. And finally a new vehicle was created when half-track was pronounced half-truck. A few more maps would be a great help unless you are very familiar with the area around Bastonge.
Read more
7 people found this helpful
Helpful
Report abuse

Omega60Top Contributor: Star Wars
4.0 out of 5 stars Excellent read of an untold part of the Battle of the Bulge
Reviewed in the United States on January 26, 2015
Verified Purchase
The Battle of the Bulge is one of the greatest failures in US Army Command ever. The higher ups ignored the constant warnings of German build ups, ignored that the Germans were (did they forget World War 1?) resilient. And for that failure, thousands of brave men were killed, wounded and captured. This book highlights a little known chapter in that battle, how several units, under strength, under armed, but well led, stalled the Germans (who were sure that they would have rolled right over the Americans, obviously they forgot they got their butts kicked halfway across Europe, so a bit of a failure at that level as well) giving the 101st Airborne (really, again a failure on Command part, since they used their elite troops in ways they weren't supposed to have been used) the time to get to Bastonge and give the Germans a nasty surprise. The one thing that would have made this an even better book, would have been a postscript about what happened to the survivors. It kind of just ends. But still worth reading.
Read more
10 people found this helpful
Helpful
Report abuse

Amazon Customer
5.0 out of 5 stars What an amazing and unlikely story
Reviewed in the United States on November 13, 2014
Verified Purchase
Yes, we all know about the Battle of the Bulge and the magnificent defense of the surrounded city of Bastogne by General McAuliffe and his brave troops, but what we didn't know was the story of the American troops on the roads leading to Bastogne who, though separated into small scattered and isolated groups in numerous villages and along numerous roads, managed to stall the entire monstrous German offensive which had to keep a quick drive of approximately 5 days through Bastogne and the roads it commanded, in order to push to the sea and split the American and British armies. But the incredibly creative, brave, determined American troops stalled the offensive long enough to blast the German schedule and to enable airdrops of food and supplies into Bastogne while General Patton and his armored troops raced to the rescue. What an amazing and unlikely story! No one could have predicted it and no one can fail to be mesmerized and thrilled by reading about it. I highly recommend this beautifully written book!
Read more
10 people found this helpful
Helpful
Report abuse
See all reviews

Amazon Customer
5.0 out of 5 stars In the path of the German advance in December 1944. The start of the Battle of the Bulge.
Reviewed in Canada on November 7, 2016
Verified Purchase
Very well told story of the men who found themselves right in the path of the German thrust into Belgium December 1944. I have read many long histories of this battle. This one zeros in on a very specific couple of days which caused the big gamble to fail. They sacrificed themselves some knowingly many had no choice as they were caught up in it.
Read more
One person found this helpful
Report abuse