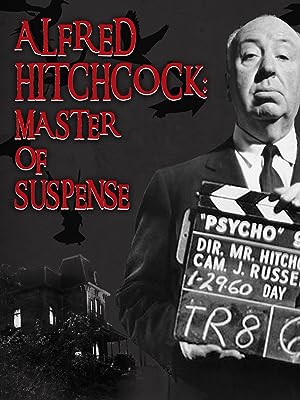 (88)
6.01 h 43 min2013ALL
This is a wonderful and revealing film about famed horror and suspense director Alfred Hitchcock. You'll see behind-the-scenes of some of his most famous films including Psycho, Vertigo and many more! Containing interviews, production shorts, trailers, film clips, news segments, and more, this collection offers a rare look into the life and times of the man who became the Master of Suspense!

George in TopekaReviewed in the United States on September 4, 2019
2.0 out of 5 stars
Best for Those Who Know Little or Nothing About Alfred Hitchcock
Verified purchase
I have seen some very good documentaries about Alfred Hitchcock’s life and work, but this is not one of them. There just isn’t that much here. It’s a very superficial overview of his movies and deals with them in chronological order, which is probably the most unimaginative and least interesting approach. There is very little discussion of the Master’s life or of the themes that run throughout his work, and no interviews with colleagues or actors and actresses who worked with him. The clips from his movies are mostly in the form of old movie trailers that are readily accessible on YouTube, and some of these contain footage that does not even appear in the movies themselves (ROPE is a notable example). There is a clip from a well-known episode of ALFRED HITCHCOCK PRESENTS (“The Man from the South” with Peter Lorre), but Hitchcock did not actually direct that particular episode! (The television series is given more time than it probably merits, as a matter of fact.) To top it all off, the video quality is terrible! Do not expect pristine, high-definition quality here.

The best viewer for this would be someone who is new to Hitchcock and just wants a quick overview of his œuvre. If you are already a Hitchcock aficionado, you can skip this because there’s probably nothing here that you haven’t heard (or seen) before.

Khristine JacksonReviewed in the United States on February 24, 2021
4.0 out of 5 stars
The Supreme .. MASTER of Film making
Verified purchase
Let's be honest..it takes a certain type of viewer to watch an Alfred Hitchcock film or television show. He still appeals to many a film buff, film student and up in coming director. Second his legacy as been cemented because he laid the foundation, added the ingredients and simmered his beloved project's like a Michelin 5 star chef. This isn't one of the greatest documentaries ..but at least this one exist.. on Amazon prime. His only heir to his legacy Patricia Hitchcock O'Connell is still alive at the ripe old age of 92 years. Yes she bore three daughters .. as far as her residence .. I can not give out certain details due to Amazons policy. She and her children may Or may not have approved of this documentary ..? There are many director's who look up to the late Master of Suspense..and to remark that there will never be another ..Well there is Brian De Palma ..and M. Night Shyamalan are the closet that we have but ... there will .. never be another .

LJSReviewed in the United States on May 26, 2020
4.0 out of 5 stars
I found the answer to a nearly 60-year-old puzzle
Verified purchase
I was a child of 3-5 years of age when the "Alfred Hitchcock Presents" series was on. My older brother used to watch it weekly. I recall him complaining that the ending of one of the episodes was interrupted and not shown because Alfred Hitchcock had explained to the TV audience that "it was too terrible to be shown." From time to time in ensuing years I wondered what it was my brother was referring to. I have now inferred from watching this documentary that the reference was most likely "The Scorerer's Apprentice" episode of "Alfred Hitchcock Presents." This documentary was worthwhile watching for me, if only for that reason.
One person found this helpful

StrindbergReviewed in the United States on August 15, 2020
2.0 out of 5 stars
There's got to be something better out there
Verified purchase
As commented on by many, I'm sure, the video quality is terrible. Having recently seen several of the films commented on in this documentary, I know there are very high quality copies out there. The films here have a quality I'd associate with bootlegs. I don't feel I got to know much about Hitchcock at all. I've heard that he often tried to hit on his leading ladies, often failing. I'd have been interested in hearing about whether this is true. But nothing at all was mentioned. He was presented as a genius (he was) and a saint (that's debatable). Too much time was spent on his television shows. They were great but it was over-emphasized. I can barely support watching this, but I loved his films so I can't support avoiding this documentary.

Mariano E. PanielloReviewed in the United States on June 30, 2017
2.0 out of 5 stars
Great PowerPoint Presentation, I Guess
Verified purchase
I'm really curious: how does something like this make it onto Amazon? I don't mean to rag on the makers of this PowerPoint slide show personally, because it seems they have a genuine admiration for Hitchcock, but it really looks unbelievably cheap and all-around God-awful. Hitch deserves better than this.
7 people found this helpful

ArdenulReviewed in the United States on June 18, 2017
1.0 out of 5 stars
Not Worth It
Verified purchase
Very poor, could not finish. A film about film-making in which the narrator can't pronounce 'UFA' is not going to get an 'A' for its research. Sloppy job, do not waste your time.
5 people found this helpful

ChrisSherrillReviewed in the United States on December 9, 2020
2.0 out of 5 stars
Maybe two and one-half
Verified purchase
I suspect that anyone interested in Alfred Hitchcock will find better documentaries than this one. It was pretty bare-bones. They tried to do too much and ended up doing not enough to honor the man and his art. Look around if you're interested in Hitchcock.

Barry (Colorado)Reviewed in the United States on October 24, 2016
5.0 out of 5 stars
This is a wonderful compilation and history of A
Verified purchase
This is a wonderful compilation and history of A.H.'s film accomplishments, showing how he became a truly unique giant in the film world, and how his contributions added to the cinematic art we experience now.
3 people found this helpful
See all reviews
Back to top
Get to Know Us
Make Money with Us
Amazon Payment Products
Let Us Help You
EnglishChoose a language for shopping. United StatesChoose a country/region for shopping.
© 1996-2021, Amazon.com, Inc. or its affiliates