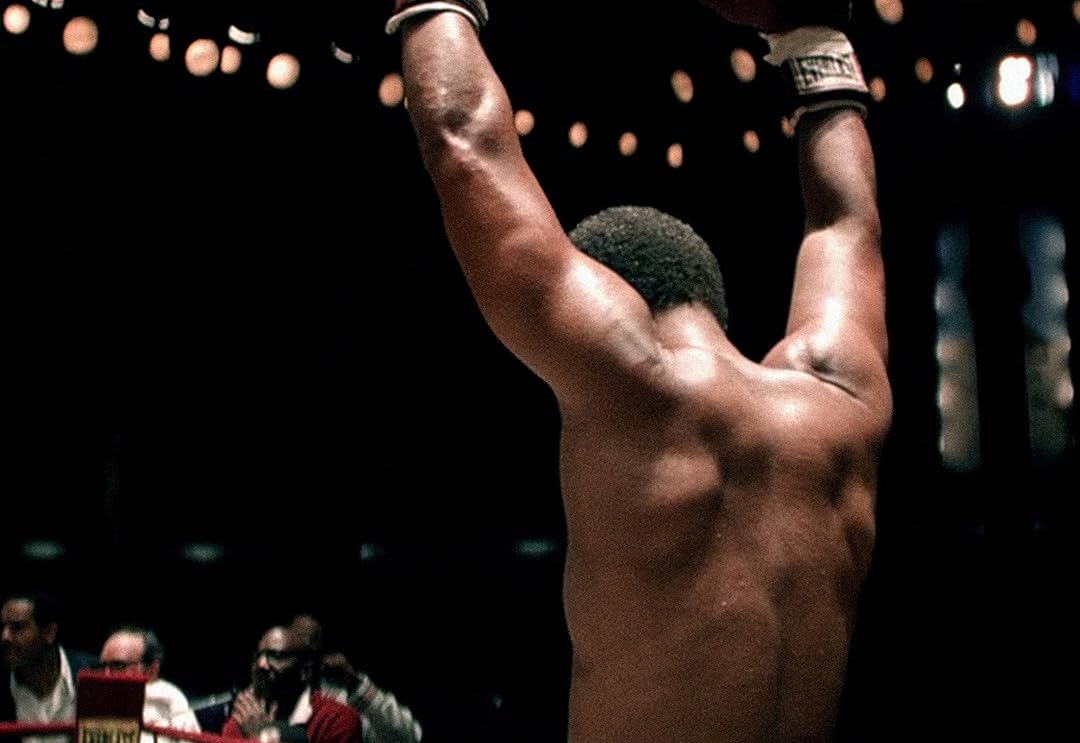 (12,714)6.82 h 36 min2001X-RayR
Will Smith puts on the gloves and steps between the ropes as "Ali," arguably the most facinating personality in sports history in this biopic from Academy Award nominated director Michael Mann.

TigerlillyReviewed in the United States on July 11, 2020
2.0 out of 5 stars
Prepare to be Underwhelmed
Verified purchase
Pros:
Will Smith did a much better job portraying Ali than I thought he would given that he looks nothing like him and weighs so much less, (even with the weight he added for the role).

Cons:
Short on dialogue and looong on music that had no bearing on, or relationship to, the story other than it was in the same time period.
Continually jumped periods of time with no warning or explanation, (I ended up stopping the film several times to Google things so I'd know what year we were in.) which left holes in the story. (At one point Howard Cosell says "You know I'd do anything for you". Really? I hadn't gotten that from the film at all.).
Slow moving, and not that engaging.
Some of the worst sound I've ever experienced. I could barely distinguish a word of the film without it being turned up full volume. And, of course, the music was very loud.

Of the 6 Michael Mann movies I have seen, this is by far the weakest (with the possible exception of Miami Vice. You could make an argument for either being the worst for different reasons.) and far below "Collateral", "Heat", and "Last of the Mohicans".

Was this a stream of consciousness experiment? I don't know, but I actually ended up liking Mohammed Ali less after seeing this film. I guess the flip side of being a charming, confident champion is being arrogant, pig-headed, and feeling like you have a monopoly on the truth/what's right. Seeing some of his interactions with Malcolm X, his wives, and his manager left me shaking my head. For someone with such a fragile ego, he showed zero sensitivity to the feelings of other people.

Overall:
See it for Will Smith's acting if you must. Otherwise, prepare to be underwhelmed.

Richard A. ColeReviewed in the United States on July 6, 2020
5.0 out of 5 stars
Awsome
Verified purchase
A great movie about one of the greatest athlete and human being this country has known. Ali played so well by Will Smith do credit to him and Muhamad Ali.
I remember growing up and watching all that was happening to Ali about the draft and so on. I have family that fought in WW-II, Viet Nam, and I in Iraq and Kuwait; None of my family had an issue with what he did or how he did it. They also believed he was treated wrongly too. Being an American does NOT mean you must fight in a war; It means you have the right not to is your beliefs dictate it. One can "serve" your country in many ways. Too bad it took 10 years or more to see he was right.
I was struck by how the "Nation of Islam" threw Ali away-Under-the-bus when it suited them And "Forgave him" when that "Nation" could gain money off his name. Not too mention the people who sucked away his money when he needed support, and they took his money. So sad, and telling about those who say they care, but only care about money and power...…. I digress.
A great movie, well done in all areas. Wish it showed more about his life and how he became the icon that he is. Bravo
2 people found this helpful

joel wingReviewed in the United States on June 13, 2020
4.0 out of 5 stars
Ali was a history maker in a time when history was being made by African Americans
Verified purchase
Ali was Michael Mann’s biography of Mohammed Ali.

The start places Ali within the larger context of African American history. Sam Cooke is performing at a concert. A young Ali sees the paper with a picture of a young Emmett Till’s face bashed in from his murder in Mississippi. Ali listens to a sermon by Malcolm X. That leads up to Ali as he fights Sonny Liston for the heavyweight title in 1964. Before and after the fight he’s visited by Malcolm X. Afterward Ali changed his name from Cassius Clay to Mohammed Ali as he became a Muslim in the Nation of Islam. The point of all this was that Ali was making history along with his times. This theme would continue throughout the movie. That was important. Mann could have just stuck with his boxing career, but Ali was always far more than that. Without including his role in politics and culture it would not have been a full picture of his life and impact. It’s also what makes this a must see.
3 people found this helpful

SilviaReviewed in the United States on July 13, 2020
3.0 out of 5 stars
Very slow
Verified purchase
The topic is excellent it would make a wonderful movie, especially with the political aspects included, but the director did a poor job at the rhythm of the film. The acting is excellent, but the entire film has long songs and long shots that over-dramatize the film and they slow it down considerably.
4 people found this helpful

josephReviewed in the United States on June 24, 2019
4.0 out of 5 stars
Great acting, great visuals, and a compelling story
Verified purchase
Almost a 5 star movie, but the story rambles a little and I think Mann didn't quite know how to wrap all his themes together in the end. Will Smith gives one of his best ever performance as a believable Muhammad Ali. Tons of great character actors giving great supporting performances. Jeffrey Wright, Giancarlo Esposito, Jada Pinkett Smith, Jon Voight, Ron Silver, Nona Gaye, Mykelti Williams as Don King and Mario Van Peoples as Malcolm X stand out.
4 people found this helpful

Rock HoundReviewed in the United States on January 29, 2021
5.0 out of 5 stars
AFTER 'I AM A FUGITIVG (1932), ALI IS THE 2nd FLICK ABOUT THE RIGHT TO THINK...ABOUT ANYTHING AT ALL
Verified purchase
MICHAEL MANN DIRECTED THIS ACTION PACKED FILM ABOUT THE TRUE CIVIL RIGHTS STRUGGLE, NOT
THE FBI-BACKED REVERENDS. VERSION.. THE REVERENDS GET HOLIDAYS ON THE CALENDAR,. AND H. RAP BROWN'S APARTMENT IN L.A., WITH 400 BULLET HOLES IN ITS WALLS, REMAINS BARRED TO CITIZENS, WHATEVER THEIR COLOR OR CURIOSITY.
MICHAEL MANN ALSO DIRECTED TV'sB EST SERIES EVER--CRIME STORY. IT DRAMATIZED ALSO POINTING OUT THAT SOMETIMES THE BUREAUCRATS MAKE MORE EFFECTIVE KILLERS THAN THE BAD GUYS O THE RUN.
I AM A FUGITIVE FROM A CHAIN GANG CONCERNS A THINKER AND A DOER WHO FOUGHT FOR AMERICA IN WW I BUT WHOSE TIRELESS SELF EDUCATION IN ENGINEERING BROKE STEREOTYPES AND SO, MARKED HIM AS A THINKER TO THE POWERS THAT BE
TO TWIST ORWELL A BIT--
ALL PERONS ARE EQEAL AND
SOME PERSONS ARE MORE EQUAL THAN OTHERS
One person found this helpful

C. G. SandersReviewed in the United States on July 4, 2020
5.0 out of 5 stars
I forgot I was watching Will!
Verified purchase
Ali did a great job showing the professional trials of Muhammad Ali and summing up his home and emotional life. And I forgot I was watching Will Smith and actually believed I was watching Ali. That’s an actor. O, and I got to mention... Jamie Fox is his excellent usual self in this. Jamie and Will in a movie in the year 2001? Now that’s bound to be magic.
2 people found this helpful

BenReviewed in the United States on August 31, 2020
1.0 out of 5 stars
Somewhat disjointed and difficult to follow
Verified purchase
This is probably my least favorite Michael Mann movie. Somehow--between the extended periods of soul music, long scenes of Ali staring at something (or making love to someone), and the poor sound quality--the plot was murdered. It would have been insightful if the audience had been clued-in to Ali's background, the motivations for his loud-mouth antics and his religious leanings and infidelities. Instead, we got "it-is-what-it-is" without much insight into his psyche. The movie was a disappointment because you watched a short, disjointed chunk of Ali's life... but for your effort, ended up not knowing him any better.
2 people found this helpful
See all reviews
Back to top
Get to Know Us
Make Money with Us
Amazon Payment Products
Let Us Help You
EnglishChoose a language for shopping. United StatesChoose a country/region for shopping.
© 1996-2021, Amazon.com, Inc. or its affiliates