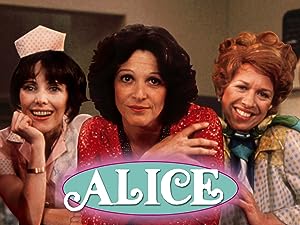 (945)
6.81977ALL
The hit first season of the long-running sit-com fave that saw a night out at Mel's quickly become a regular date for TV viewers. With Linda Lavin and Vic Tayback.

Mark N.Reviewed in the United States on July 15, 2019
5.0 out of 5 stars
The Heavens opened up and the t.v. series "Alice" was available on DVD!!
Verified purchase
I absolutely love the series "Alice" but I didn't start watching it regularly until around 1983, two years before the series finale. A plot about a widowed mother of one relocating to find a better life for she and her son, was not new to t.v., movies or literature. But that type of plot was easier to digest in a time when a woman found it very difficult to be accepted as independent and capable of making it on her own, without a man, unless she was forced into it because of a death, divorce or because she had to leave an abusive relationship. Another truth of that time was you didn't see a lot of single female characters getting employed for work other than lower paying and/or menial jobs such as waitresses, maids, housekeepers, nannies or clerks. Season one's pilot episode, that aired August 31rst, 1976, had casted Alfred Lutter as "Tommy Hyatt" (Lutter also portrayed the character "Tommy Hyatt" in the movie entitled "Alice doesn't live here anymore" which this series is based upon). For some reason Lutter's portrayal of "Tommy Hyatt" ended after the pilot episode and he was replaced by Philip McKeon beginning with episode two, "Alice Gets A Pass", which starts out with a controversial "bang" by having a gay character. The third episode "A Piece Of the Rock" deals with Alice's late husband's last will and testament and an unknown female beneficiary. It's a very charming and heartfelt episode and one of my season one favorites. Linda Lavin plays the title role of "Alice Hyatt". A fairly young widow ,with a 12 year old son, who decided to move from New Jersey to California to pursue her dream of a singing career but their car breaks down and they end up stranded in Phoenix AZ. Alice gets a one bedroom apartment and then finds a waitressing job at "Mel's Diner". Philip McKeon is well casted as "Tommy Hyatt". Tommy is a charming, self proclaimed, precocious 12 year old and though his on screen appearances aren't as numerous as the other four main characters, he makes an indelible mark on the series. "Melvin Sharples" is played by Victor Tayback. "Mel" is a cook and a "slightly" obnoxious guy who, underneath it all, has a really big heart (to go along with his big mouth and voice). Polly Holliday, who couldn't have been better casted, plays waitress "Florence Jean Castleberry" aka "Flo". A small town, Texas girl living in Phoenix Az in a small trailer. She is tall, attractive, flirty, down-to earth and boisterous and introduces the catch-phrase "Kiss my grits" to the viewing audiences. Beth Howland plays "Vera Gorman". A loveable, skinny, naive and neurotic waitress who can barely make it through a day without some crisis or another. This series deals with various situations. Some are light, some are heavy and others controversial. Although the show features a lot of situations for the title character "Alice" it does disperse plots somewhat equally among the other main characters and their daily lives. I'm so happy that this series became available on DVD. "Alice" is a definite must have for your collection. I very highly recommend this series!!...... (There is an actual "Mel's Diner" in Phoenix AZ . It's hidden away in an industrial area just (correction is) East (not West) of the I-17 freeway, off of Grand Ave, between McDowall and the Papago freeway.)"RIP Philip McKeon"
6 people found this helpful

TerriGReviewed in the United States on March 25, 2021
2.0 out of 5 stars
Does not include a list or description of each episode.
Verified purchase
If you don’t mind just blindly popping a dvd into your machine without knowing what each episode is about you’ll be fine. But most people would appreciate a description of each episode , especially of you are looking for a specific episode with a guest star. All you get is a plastic clamshell with three unlabeled (aside from the word “Alice”) dvds.
They could have added one lousy step and. Included a sheet with the episode lineup. What would it have cost? An extra nickel?
2 people found this helpful

Gene BelflowerReviewed in the United States on June 26, 2014
5.0 out of 5 stars
Alice: The Complete First Season
Verified purchase
Alice is a classic sitcom from that started in the late seventies and continued strong well into the mid eighties. It was one of the biggest hits on CBS, airing nine seasons from August 31, 1976 to March 19, 1985, totaling 202 episodes.

The first season of Alice consists of 24 episodes on three discs. In the first episode, we met Alice Hyatt (Linda Lavin), an aspiring singer who stops in Arizona with her preteen son, Tommy (Philip McKeon). She finds employment at Mel's Diner, alongside the sassy Flo Castleberry (Polly Holliday) and the light-headed Vera Gorman (Beth Howland); the diner is owned and managed by the cheap and bossy Mel Sharples (Vic Tayback). This first season is hilariously written and performed, and is just a taste of what is to come for this great series.

I know some of the previous reviewers have had problems with the DVDs not playing or skipping uncontrollably. I personally did not experience any of this: my discs worked perfectly and do not skip. My only complaint would be the quality of the episodes. Others had praised it, calling it "perfect", but I would say the quality on all episodes rank a 8.5 out of 10, which isn't too bad, but I expected better from a retail DVD release. Well, overall, I am very satisfied with my purchase.

BassoonGuy68Reviewed in the United States on July 18, 2013
5.0 out of 5 stars
Just Great!
Verified purchase
I grew up watching these shows in syndication, and I remember taping them on our brand new top-loading VCR. My brother and I watched them over and over. Watching them today, in my 40s, doesn't change that special feeling we had back in the late 70's. This is a great show because each character is very special and different. I didn't know it before, but the writers of Alice are Bob Carroll, Jr. and Madelyn Pugh-Davis from I Love Lucy. No wonder the jokes are subtle and funny, and the situations thought out. And who doesn't love Flo? Linda Lavin as Alice holds it all together. I'm so glad they got rid of the Tommy from the pilot episode! Nice to see it nonetheless. Some of the show topics are preachy if you ask me, but I guess that is expected. I highly recommend this set, and I hope more seasons will follow!
5 people found this helpful

John CousinReviewed in the United States on March 27, 2015
3.0 out of 5 stars
I Love Late 70's 80's Shows Like This!
Verified purchase
I received this in only two days, which was very impressive. However, I was unable to play the discs in my DVD player, reduced to watching them in my PC drive. Maybe the discs are defective, or, it's due to the fact that they were made in DVR format. Has anyone else experienced this? I would think that a major company like Warner Brothers would manufacture a popular series such as this in the standard DVD format. Also, no episode guide is included, which I'm sure will anger some die-hard fans of the show. But in the end, I'm glad to have the episodes in any form. hopefully, IF I purchase the remaining seasons, I'll have better luck.
6 people found this helpful

Eve the MuseReviewed in the United States on August 15, 2013
5.0 out of 5 stars
I Love This Show
Verified purchase
I loved this show. The cast is just great and they get into the funniest situations at Mel's Diner. Linda Lavin has a great singing voice and I love just hearing her sing and scat at the beginning and ending of the shows. I am totally satisfied with this purchase because I've never laughed so much in my laugh. In these troubled times, you need to be able to laugh. Yet there are touching moments as well and lessons to be learned yet you get a barrel of laughs in addition to that. I got more than my money's worth with this purchase because laughter is good medicine for everyone and priceless.
7 people found this helpful

tanya thorntonReviewed in the United States on June 21, 2021
3.0 out of 5 stars
Missing shows on docs 2
Verified purchase
[[VIDEOID:81579897eed0279eaf818370af213ab]] The first DVD played well the second had no medium on it didn't play at all the third played well so I'm afraid to get the second season it was made on a DVR
See all reviews
Back to top
Get to Know Us
Make Money with Us
Amazon Payment Products
Let Us Help You
EnglishChoose a language for shopping. United StatesChoose a country/region for shopping.
© 1996-2022, Amazon.com, Inc. or its affiliates