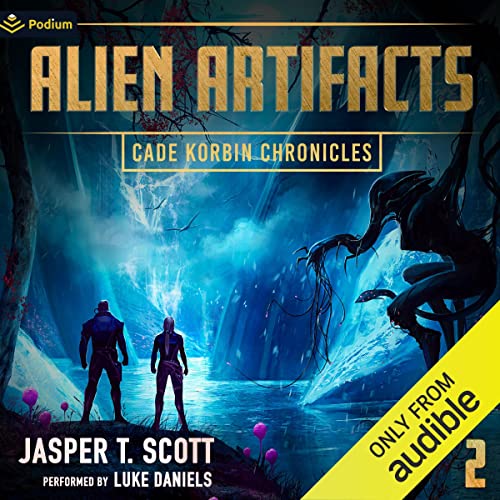 A deadly mission to an uncharted world riddled with ancient secrets.

On his last job, Cade Korbin lost his ship, lost his credits, and barely escaped with his life. But it’s not over. His enemy is still out there, nursing a decades-old vendetta, and now his guild is coming after him for breaking their rules.

Cade desperately needs credits and somewhere to lie low for a while. To that end, he takes a job on an uncharted world, code-named Nexus, to rescue a team of missing researchers and to recover the alien artifacts that they went searching for. But Nexus proves to be far deadlier than even its class-five hazard rating would suggest, and Cade realizes that he’ll be lucky to escape with his life, let alone accomplish the mission. Yet unknown to Cade, there is a danger on Nexus that goes far beyond the alien monsters that prowl its surface: A terrifying menace has been waiting for untold eons to emerge.

And Cade Korbin is just about to wake it up.

Your audiobook is waiting!
Learn more about Membership
List Price: $34.99
You Save: $4.37 (12%)
By completing your purchase, you agree to Audible’s Conditions Of Use
Sold and delivered by Audible, an Amazon company

Gil Forbes
5.0 out of 5 stars WOW! I didn't see that coming
Reviewed in the United States on April 13, 2021
Verified Purchase
Two already warring human civilizations are trying to go for the same ancient artifacts on a planet that is populated by monsters both aerial and dirt-bound that can swallow a man whole. They arrive at the spot where you just made the mistake of generating any kind of EM energy. You can't see or hear them coming because the appear right next to you through a rift in time/space. If that isn't bad enough there's a toroid shaped orbital station that is unassailable, armed with advanced weaponry, and is uncannily accurate with it's weapon systems. It is defending a particular segment of the planet that is believed by the humans to be the repository of the technology of the Priors an ancient civilization that's a million years old and at least that long gone. Whichever group can get that tech will win the war, but there is an extremely high cost in human lives to get anywhere near it. Skillfully woven into this frightening tale are examples of familial love, twists and turns in the thinking that finally leads to a very surprising villain. Please do not read this before going to bed. I guarantee you will not go to sleep easily.
Read more
5 people found this helpful
Helpful
Report abuse

William S. Morris
5.0 out of 5 stars Not your grandfather's bounty hunter
Reviewed in the United States on April 22, 2021
Verified Purchase
Okay, this book is weird. The author wants us to get introspective about what is appropriate killing and what is not. There's the old Nuremburg issue of whether killing because of an order from your superiors is righteous or not. What if the person doesn't really die? I disagree with the author, but there is no good answer. So we start with a busted mission. Then we have to escape. There are players whose motivation are unknown. There are physical limitations on what can be done, and there are unexpected consequences. The book is essentially boring for the first half. We find a Xeno, but it's not very interesting, and it's not very smart. We get rescued from an uncharted planet under unexplained and unusual circumstances. We go for a grand invasion using the resources of people we just met, and they say yes?!? It's a bust so we get captured?!? We're off for a suicide mission, but things are strange. Then they get stranger. Everybody stabs everyone in the back, so we all become friends. All except for our old weird friend who reneges on his promise. What's up with him? No one but the Orange robot knows for sure.
Read more
2 people found this helpful
Helpful
Report abuse

Greg
5.0 out of 5 stars Absotively Awesome
Reviewed in the United States on March 23, 2021
Verified Purchase
This story was definitely an action packed, topsy turvy Thrillride from beginning to end. The characters are endearing and believable with Brighten being my favorite extra-terrestrial pet since Flinx's dragon Pip. I am going to preorder the next one right now and you should read this one and see why.
Read more
4 people found this helpful
Helpful
Report abuse

Hebol
5.0 out of 5 stars Jasper Scott delivers another page turner
Reviewed in the United States on March 29, 2021
Verified Purchase
I read most books for my enjoyment. Sometimes a few business books but most are fictional books. After a few years of random kindle books I have started to be more picky. Especially I listen to myself by noticing if I read books to pass some time or if I find time to read.
The first part of the Cade Corbin Chronicles was really good (and you probably agree on since you are reading this review) new ideas and aspects of his world creation which gave me several twists in the story I did not see coming.

This second book in the installment continues the story but in another direction. For me the setting and flow of events was surprisingly different but still just as enjoyable.
The book was for me read in surprisingly few days due to he urge I had to read it. Especially if you have enjoyed the first part getting this part is a no brainer.
(spoiler alert; he survived) I really look forward continue follow Cade Korbins continued adventures in the third book.
Read more
One person found this helpful
Helpful
Report abuse

Kindle Customer
5.0 out of 5 stars WOW
Reviewed in the United States on March 24, 2021
Verified Purchase
Jasper never disappoints. Cade is a terrific hero. He has regrets over past acts as a military assassin and tries to make amends by living off the grid and using those same skills as a bounty hunter with a twist -- he won't take a contract until he determines the target really needs dying. His sense of justice leads him into all kinds of trouble.
Read more
2 people found this helpful
Helpful
Report abuse

Kindle Customer
5.0 out of 5 stars Alien Artifacts Review
Reviewed in the United States on December 23, 2021
Verified Purchase
This book shows Humans needing to use there brains and humans skills to do their mission. Future tech was used, but ingenuity, and reasoning was there also. The descriptions of the alien world were good. There was no lack of action. The characters are well thought out and believable.
Read more
Helpful
Report abuse

Steve Shearer
5.0 out of 5 stars Cade Korbin is at it again
Reviewed in the United States on April 1, 2021
Verified Purchase
Jasper T. Scott does a great job with the second book about 'ol Cade. I like the way he describes the various senes. The level of detail is great gives me an idea of what the time and place is like for the charters.
Recommend this book and just about anything that Mr. Scott does.
Read more
Helpful
Report abuse

Henry
5.0 out of 5 stars The perfect mix of James Bond and Star Wars!
Reviewed in the United States on June 18, 2021
Verified Purchase
Very well written and fleshed out characters. I couldn't put books 1 and 2 down. Once I started them I had to read them without stopping. These books were written as well as any other SciFi I have ever read and better than many of my favorites. Keep up the great work.
Read more
Helpful
Report abuse
See all reviews

jason Smith
5.0 out of 5 stars Cade Korbin is progressing into a fantastic character..
Reviewed in the United Kingdom on April 18, 2021
Verified Purchase
flies along nicely and continues in the same vain as book one the bounty hunter, Its clear (to me at least) there are far more layers to strip back from the main Protagonist Cade Korbin, and book 2 starts this process bring back a few surprises from his past and resolving a few questions along the way.. The story line, as always with Jasper contains a twist or 2 along the way but not entirely unexpected and this in itself sets up for the book 3 very nicely, I am hoping Jasper expands the storyline into one off stories Like Adrian Tarn or Dirk pitt style but kept closely to the plot outlined in the first 3 books, this could be set for the bad ass version of Buck Rodgers and for me I can't wait to see what trouble he get into in future books, Keep up the great writing Jasper T Scott..
Read more
Report abuse

Steve parker
5.0 out of 5 stars Another gripping yarn from Jasper Scott
Reviewed in the United Kingdom on December 24, 2021
Verified Purchase
A tale spanning the universe with strong characters and an imaginative plot with the story ending on a mysterious planet guarded by ancient technology. A must read, can't wait to start the next book in the series and I wont.
Read more
Report abuse

Iain
4.0 out of 5 stars Continues where the first left off and leaves you wanting to read more
Reviewed in the United Kingdom on November 13, 2021
Verified Purchase
I enjoyed book 1, so thought I’d try the next book. It’s basically more of the same but that’s no bad thing.

I think the writing is a bit slicker, certainly I breezed through it faster. Story wise, it is not predictable nor overly complex. I was after an entertaining, easy SF read and it delivers.
Read more
Report abuse

Peter
4.0 out of 5 stars Great
Reviewed in the United Kingdom on May 26, 2021
Verified Purchase
Better than the first episode, and that was really good. Quite suspenseful as the plot was only slowly revealed, and a nice ending.
Read more
Report abuse

Amazon Customer DH
5.0 out of 5 stars Another winner from Jasper T Scott
Reviewed in the United Kingdom on May 25, 2021
Verified Purchase
Another winner full of twists and turns. An enjoyable read that keeps you turning pages long after you should have taken a break.
Read more
Report abuse
See all reviews