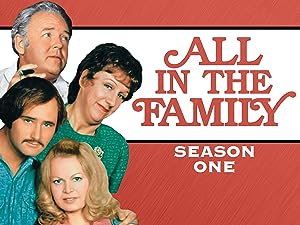 All In The Family

(568)
1971X-RayNR
A working class bigot constantly squabbles with his family over the important issues of the day.

S. J. VolkReviewed in the United States on September 4, 2018
5.0 out of 5 stars
ARCHIE, EDITH, MIKE & GLORIA… 1970’s TV EUPHORIA!!!
Verified purchase
“ALL IN THE FAMILY”. My father hated Archie Bunker. Dad never realized that he was exactly like Archie. (Or maybe he did, and that’s why he hated him). It's easier to see our own faults in others. The show’s brilliant creator, Norman Lear, wanted to illustrate how prejudice and bigotry are usually the result of stupidity and ignorance. And over the past 47 years, by laughing at Archie (and therefore at ourselves) I’m sure the show did help to make society a bit more enlightened.

TRIVIA #1: I recently watched the show after many years, and I had forgotten how hysterically funny Archie was! Not surprisingly, this ground-breaking series ran for 9 seasons on CBS. And TV Guide named it the 4th most popular TV show of all time! Considering the hundreds of TV shows, fourth place is nothing to laugh at. The top 3 all-time best shows were: Seinfeld, I Love Lucy, and The Honeymooners.

TRIVIA #2: “All In The Family” is said to have been based on an earlier BBC sitcom "Till Death Us Do Part". I don't like thinking that England beat us to the idea, but I'm beginning to sound chauvinistic like Archie Bunker, so I'll say no more. (If this review was helpful in any way, please click on the “Helpful” key below, or write a comment. Thanks).

B. McCombsReviewed in the United States on December 11, 2019
5.0 out of 5 stars
This will be a Christmas present
Verified purchase
I will give this to my son and his family to watch, also I will watch it for myself, to bring back fond memories of watching all these programs. I enjoyed watching it, a few years ago, so will my son. Some parts, will make you laugh, or cry, questionable comments on different subjects, will make you say, "did they really say that".. It's a must to order, or be called "a meathead".
2 people found this helpful

ClariceReviewed in the United States on October 2, 2017
5.0 out of 5 stars
Great series
Verified purchase
Should have given critic long ago. It's just great acting. Just lovely series. Other seasons great too. I love it, it deals with many issues also Nixon(especially:), women's rights, and the liberal, conservative. I am conservative by nature and love how Carroll play, but I can relate to Rob too(I was hippie in 1991 and know what he says..) but anyone watching it will easily feel he is related to the characters easily because it touched the topics still we deal with. I give it 5 stars for this season but loved the 2nd and 3rd as well.
6 people found this helpful

LindaSReviewed in the United States on January 14, 2018
4.0 out of 5 stars
Happy Blast from the past....
Verified purchase
Good ole' All in the Family. Great memories, though Archie Bunker is SOOOOOO politically incorrect.. Just beware that due to the TV technology of the 70's, the film is a bit grainy - guess HD has spoiled me! But def true All in the Family - and a very reasonable price.
6 people found this helpful

Doc SavageReviewed in the United States on June 30, 2019
5.0 out of 5 stars
Edith...the meathead...and sweet Archie!
Verified purchase
All wonderful characters created by Norman Lear and set the world ablaze with 2 words...ARCHIE BUNKER! dvd set is in good shape for the first season of this funny sitcom with Edith and Archie, Gloria and Meathead (Michael). Good laughs.
2 people found this helpful

DVD fanReviewed in the United States on February 11, 2007
5.0 out of 5 stars
Still funny after all these years
Verified purchase
I enjoyed every episode spread over these three discs. The only feature I wish it had was a "play all" feature. Season one has 13 episodes:

1. Meet the Bunkers-In this pilot episode, it's Archie & Edith's 22nd wedding anniversary and Gloria & Michael have planned a surprise brunch to celebrate. But a heated discussion that leads to the question of whether or not Archie is predjudiced alters the party atmosphere.

3.Oh, My Aching Back-When Archie is rear-ended by a Jewish woman he decides to sue and demands to be represented by a Jewish firm.

4. Judging Books by Covers-Archie thinks Mike's friend is gay, however it's Archie's friend Steve, who sets the record "straight".

5. Archie Gives Blood- Archie tries to chicken out of giving blood saying he is worried about who the recipient will be.

6. Gloria's pregnancy-A very touching episode. Gloria discovers she is pregnant. Mike decides to quit college and get an apt. to support Gloria and the baby.

9. Edith Has Jury Duty-Edith is chosen for jury duty for an improtant murder case & is sequestered away from her family, which doesn't make Archie too happy and when Edith lone dissenting vote causes the deliberations to run longer, there is no telling when she'll be coming home.

10. Archie Is Worried about His Job-Archie can't sleep from worrying when he learns his company is cutting their personnel by 20%.

11. Gloria Discovers Women's Lib-Gloira reads some books about women's lib and tries to convince her family that both sexes are equal, but Mike isn't buying it.

12. Success Story-One of Archie's old army buddies, who is now a wealthy man, reveals to Mike that although he make look like a million bucks on the outside, inside he is bankrupt.

13. The First and Last Supper-Edith accepts a dinner invitation from Louise Jefferson, but Archie refuses to go. But when Lionel puts Archie ont he spot, they bring the meal over to the Bunkers.

All three discs play fine and the quality is good. No special features but does have english and spanish subtitles. Still a very funny show.
14 people found this helpful

KitReviewed in the United States on October 3, 2007
3.0 out of 5 stars
Wonderful series, crappy DVD!
Verified purchase
"All in the Family" is justifiably remembered as one of the greatest TV shows ever to air on American TV, and probably one of the greatest anywhere. It was very well-written and well-acted, at least for the first few seasons. TV audiences had never seen anything quite like it and they were hooked!

No one was prepared for a character like Archie Bunker. Here was a man who had opinions and ideas that were quite repulsive to the average American. Or at least that we claimed were repulsive. In truth, his views were and are shared by a great many people. Watching the show now I was amazed at how recent it all feels. The only thing different, really, is that Archie, a hard-core Republican neo-con before neo-cons existed, was also a staunch union member. That wouldn't be the same if the show was done now. Admitedly, nowadays you don't have people talking quite as directly about their prejudices as Archie did, but they're still there, just lurking in the back of the mind and coming out in code (ie: "Urban" instead of "colored").

Sadly, this series is given the shaft on DVD. It has even less extras than early Paramount DVDs, where they'd list "Chapter Stops" as a special feature (one which this DVD set lacks, btw). Given that all the main actors, plus Norman Lear, are still alive and kicking (except Caroll O'Connor, of course), one would think they would have at the very least assembled them for an audio commentary on the pilot. But no. No retrospectives, no commentaries, no news clips on the controversy of the show, nothing. That is the one and only reason this set gets three stars instead of five. It's still worth owning for the episodes, but otherwise... eh. They could've done a lot better. Mind you, seasons two and three, which I also own, didn't improve on this any. It's really sad, cause a show this great deserves better.
7 people found this helpful

Thomas JanowskiReviewed in the United States on April 14, 2002
5.0 out of 5 stars
All In The Family on DVD--what could be better
Verified purchase
I read the other reviews and I hear people complain about the sound not being digitally remastered or the lack of DVD "extras". And who cares about the number of discs? Actually having the entire first season on 3 discs is great because you can share one with friends and still have 2. I actually love the sound...since it is exactly like the sound when it was originally broadcast...very nostalgic.
Here are my comments...the picture is perfect and on DVD it should last almost forever. But All In The Family isn't about high tech extras. AITF is still about social issues and these episodes are just as important today as it was when it was first broadcast. Actually it is more important because sadly, while the show poked fun at bigots way back then, some people still haven't gotten the message. Some people could somehow laugh at Archie and his antics and yet not know they were exactly like Archie.
AITF is still ground breaking. If you loved AITF as a tv series, you will love this DVD...even without all the DVD extras.
16 people found this helpful
See all reviews
Back to top
Get to Know Us
Make Money with Us
Amazon Payment Products
Let Us Help You
EnglishChoose a language for shopping. United StatesChoose a country/region for shopping.
© 1996-2021, Amazon.com, Inc. or its affiliates