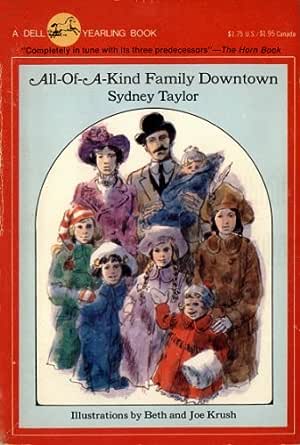 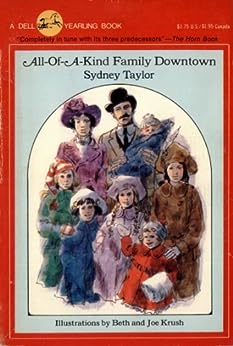 A worthwhile message of tolerance, endurance, and friendship. Everyone will enjoy and benefit from meeting the All-of-a-Kind Family"

This excellent audiobook will find an eager audience in schools and public libraries."

Born in 1904 on New York's Lower East Side, Sydney Taylor was one of the first authors of children’s books centered on Jewish characters. She didn’t begin writing until she married and had a daughter, to whom she told bedtime stories about growing up with five sisters. She wrote a manuscript and put it in a drawer, and it wasn’t until her husband secretly submitted it to Charles A. Follet Award for Writing that Taylor’s bedtime stories became the immensely popular All-of-a-Kind Family series.

Taylor died in 1978 at the age of seventy-three. The Sydney Taylor Book Award is given each year by the Jewish Association of Libraries to a book for young people that authentically portrays the Jewish experience.

Gr 3-6-It is a feat worth noting when a children's book survives from generation to generation. The All of a Kind Family books by Sydney Taylor evoke a simpler and gentler time, and have been rediscovered anew since the 1950s. The setting is New York's Lower East Side, teaming with immigrants. The author portrays a loving Jewish family, and paints a rich tapestry of their experiences in pre-World War I America. In All of a Kind Family Downtown (IPG Chicago, 1988 reprint ed.), the five sisters are at the center of their loving family. Their laughter, adventures, and old-fashioned activities will delight sensitive readers. Suzanne Toren's nuanced reading brings the characters to life. She perfectly captures the voices of the young sisters, and her rendition of the immigrant accents of New York keeps the reading lively. While the story is not gripping by today's standards, children will find themselves captivated by the family's warmth and humor, and fascinated by the details of Jewish life and celebrations at the beginning of the 20th century.

In the All-of-a-Kind series, Taylor presents a insider's view of early-1900s New York through the eyes of five spirited sisters. Suzanne Toren skillfully portrays the immigrant parents' accents, the chirpy children, and even sings a beautiful ballad. She also convincingly recreates the well-written text and performs a subplot in which a child confronts her conscience most believably. Listeners feel privy to each child's reactions and thoughts as she experiences the often harsh conditions of the city, as well as her warm and loving home life. A worthwhile message of tolerance, endurance, and friendship is subtly projected in these true-to-life vignettes. Everyone will enjoy and benefit from meeting the All-of-a-Kind Family. S.G.B. Winner of AudioFile Earphones Award © AudioFile 2002, Portland, Maine-- Copyright © AudioFile, Portland, Maine
Read more

4.6 out of 5 stars
4.6 out of 5
29 customer ratings
How does Amazon calculate star ratings?
Amazon calculates a product’s star ratings based on a machine learned model instead of a raw data average. The model takes into account factors including the age of a rating, whether the ratings are from verified purchasers, and factors that establish reviewer trustworthiness.
Top Reviews

Amazon Customer
5.0 out of 5 stars The Americanization of Us
Reviewed in the United States on August 12, 2017
Verified Purchase
I read the whole series when I was a child,starting with All of a Kind Family, all the way to the last title. They were all fabulous. For the information of potential readers, the library mentioned in the first book , on East Broadway in NYC, is still there, a working library. If you visit NYC you can see it. The books present a picture of the way immigrants families worked hard to become Americans, just as they continue to today.
Read more
6 people found this helpful
Helpful
Comment Report abuse

Arden Tubbs
5.0 out of 5 stars Charming and cute
Reviewed in the United States on September 6, 2019
Verified Purchase
This series has aged so much better than many children's books from the time (Little House on the Prairie, looking at you). A great introduction for kids to Jewish American life at the turn of the century, with enough underlying plot to be interesting.
Read more
Helpful
Comment Report abuse

Jessica Nye
5.0 out of 5 stars Amazing story
Reviewed in the United States on March 14, 2017
Verified Purchase
This story is wonderful! It has superior wording and I love the joy it brings me. The adventures of All Of a Kind Family will never get old!
Read more
One person found this helpful
Helpful
Comment Report abuse

Amazon Customer
5.0 out of 5 stars Loved these as a kid
Reviewed in the United States on March 25, 2014
Verified Purchase
Re-read them as an adult and still love them. As a child, reading these books made me more familiar with the customs of Jewish families than any of my friends. I think that helped me to become an adult with wide-ranging interests and friends from many different countries and religions.
Read more
One person found this helpful
Helpful
Comment Report abuse

Winona TL Williams
5.0 out of 5 stars The best book series ever
Reviewed in the United States on March 22, 2015
Verified Purchase
I read the All Of A Kind Family books as a child and I loved them. I replaced them and then there was a flood and I lost them so now I am replacing them.
Read more
One person found this helpful
Helpful
Comment Report abuse

Linda K.
5.0 out of 5 stars Audio Book
Reviewed in the United States on July 9, 2013
Verified Purchase
This is a high quality CD set. Love it. Great for family traveling distances in need of activity for children who are bored. Great order. Will probably order from this seller again.
Read more
One person found this helpful
Helpful
Comment Report abuse

Christmas in New York Collector
5.0 out of 5 stars Well written and engaging
Reviewed in Canada on August 27, 2019
Verified Purchase
Loved it
Read more
Helpful
Sending feedback...
Thank you for your feedback.
Sorry, we failed to record your vote. Please try again
Report abuse