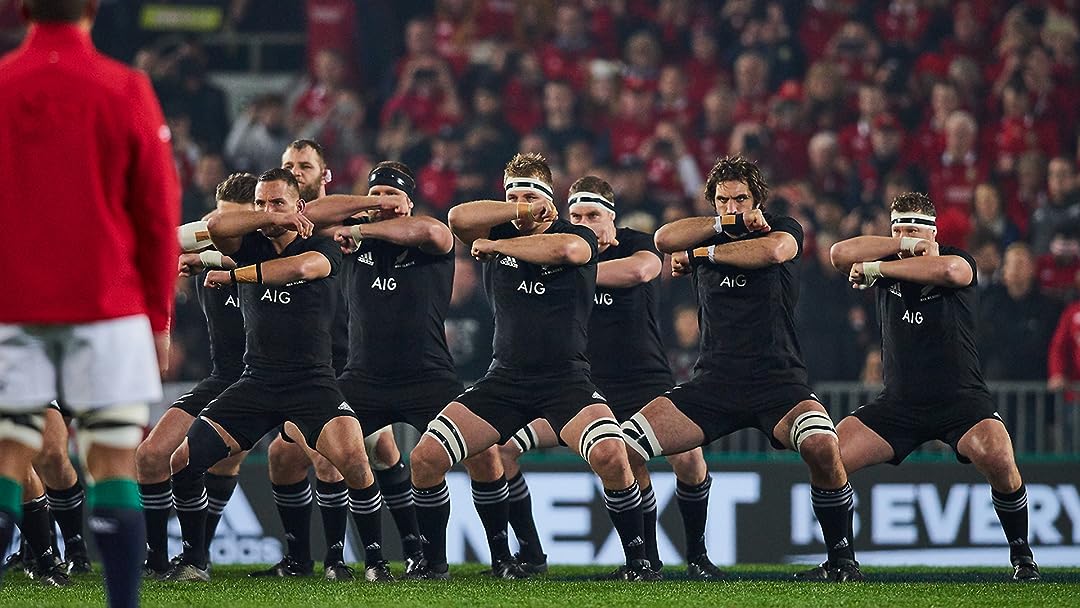 Season 1
(191)
8.12018X-RayHDRUHD16+
For the first time ever, The New Zealand All Blacks rugby team, known as the winningest team in global sports history, allows cameras into their super secretive world to witness one of their most difficult seasons yet. Over four months, they face the demands of the most physically grueling team sport on the planet to uphold a legacy of excellence and dominance that goes back well over a century.

Kit ArndtReviewed in the United States on May 12, 2018
5.0 out of 5 stars
Best Team Sport on the Planet (Texas perspective)
I am a Texas boy that grew up in the religion of football (American). I played HS football for a very successful football program (Katy Tigers). It was in my blood and I never gave a rugby a glance (I thought it was something played by ivy league college elites for some reason). I cannot put into words on just how wrong I was. Rugby is quite simply the best team game on the planet and I now barely give football a glance. All I do now is eagerly await watching the All Blacks or some other rugby match played in some far off land.
If Americans who now love football would learn the rules of rugby (it takes a little bit to transition as I often found myself asking "why are they kicking the ball away... keep possession") they will find a physical, grit-demanding sport that is fantastic to watch (or even play since I found it to be like "kill the man with the ball" with onside rules). I have no doubt that you will love it if you give it a chance....
If only New Zealand's TZ wasn't in the middle of the night... but a problem to solve for another day..

mad13sReviewed in the United States on June 4, 2018
5.0 out of 5 stars
Fantastic Series!
As someone who grew up playing baseball, football, and basketball (with my guilty pleasure being hockey) I knew nothing about rugby other than what I’d seen on TV. I know that all sports have their problem children and issues, but if I were to be asked what sport I’d like my own kids to play it would be rugby - the type of individual it seems to produce is humble, confident, and willing to sacrifice for the team. Such things are sorely lacking in our current sporting culture here in the states. It was great to listen to the interviews and see into the personal lives of these “ordinary blokes doing extraordinary things” while they work at being fathers, brothers, and friends. The amount of pressure they face having such a legacy of success is equal only to the work each of them put into their craft. And the pride they showcase putting on a jersey that represents not only their nation but generations of men who came before them is applauded. This was a fantastic series and created an All Blacks fan here in the U.S.
30 people found this helpful

Harry FeatherstoneReviewed in the United States on May 15, 2018
5.0 out of 5 stars
Thanks Amazon for sharing the sport of Rugby
Thanks Amazon. I'm a 66 yr old yank that played for 28 years. I started in San Francisco in 1972. Back then and for many years, the All Blacks and ALL of the Rugby playing nations were "rumors". I was somewhat fortunate that my club, the San Francisco Rugby Club, founded by ExPats had players from many of the Rugby playing nations and I would get "tidbits" of information about the rest of the World. With today's technology I can Stream games from around the World as long as I keep on top of things. Thanks Amazon for providing yet one more vehicle for the "Rugby starved" people of the World
32 people found this helpful

PeachyPatReviewed in the United States on June 14, 2018
4.0 out of 5 stars
Move over American football. The All Blacks are coming.
Grew up with all of the usual US sports. Married a soccer fan and learned to love this sport. Knew nothing about rugby so I was glad to see this offering on Amazon. Wow! what a great sport and wonderful team. Did a little research before I watched so I knew the basic rules and what to expect. The All Blacks far surpassed anything I had in mind. Very good insight into the game, the players and the coaching. Wish we could have heard more from the non "stars" of the team. That would have completed the picture. I know I'll be looking for coverage of rugby so I can continue to learn and appreciate this great sport.
14 people found this helpful

SamReviewed in the United States on May 11, 2018
5.0 out of 5 stars
Must watch for fans of all sports.
There is no professional sport team or club that matches the class of the New Zealand All Blacks. Their team culture and values in leadership are the foundation of their success. The winning is a result of priorities in those values. American athletes of all ages and abilities would do well to contrast the differences and begin to shift towards a culture that shuns stubborn super stars and celebrates the team.
28 people found this helpful

JulieReviewed in the United States on June 11, 2018
5.0 out of 5 stars
Amazing Series - If you're not a rugby fan, you'll become one
So much heart, so humble, incredible athletes - this is what sports should be about. I'm not all that into American sports and I couldn't take my eyes off this series and the game play. I never would have imagined I'd be a Rugby fan until watching this series. Though it's hard to see them playing this without some sort of helmet - the culture and soul of this game and team somehow balances out the absolute raw intensity of the game itself.

My only niggle is that the All Blacks seem to think they should play every game at the highest level all the way through with superhuman perfection and shut out every other team from scoring and winning...that would ruin the game, honestly. The other players/teams also train hard, deserve respect, and need to bring rivalry, and represent their countries. They too have personal stories behind the game, and that's what makes the whole thing matter at all. Winning is great but the game is so much more than that, and the heart of the game resides within the humans playing and the humans rooting for their team. Otherwise it's just ego against ego and becomes about wealth and celebrity - for me, that's what makes American sports feel hollow and empty.
16 people found this helpful

Integrated LivingReviewed in the United States on February 15, 2022
5.0 out of 5 stars
It all started with the haka... then on down the rugby rabbit hole LOL
How did I never know before now how awesome rugby is? Because of the internet, the world really is flat, as Thomas Friedman commented on how technology has brought the globe closer together. Years ago I was a Dallas Cowboys fan and staunchly sacrificed my Sundays, Mondays, and sometimes Thursdays every football season rooting for a team that was never again going to be the team of the 90s (thanks to Jerry Jones, in part). I got tired of giving so much for something that wasn't in any way enriching or gratifying after awhile, and even more tired of all the arrogance, drama, and toxic masculinity surrounding American football as a whole.

Fast-forward a decade and I discover the Maori haka on YouTube. Hours of haka videos later, I run into All or Nothing on Amazon and decide to see what the All Blacks are all about besides their traditional starting ritual. First of all, can we celebrate the way New Zealand honors its indigenous traditions by incorporating haka in schools, at weddings, funerals, ball games, and all occasions with EVERYONE of all races participating in solidarity together. If that happened here, anyone that wasn't Maori would get lambasted for "cultural appropriation."

I'm so glad I watched this series. Rugby is a gritty, fascinating, exciting sport; so much more fun to watch than the endless, tedious "advance-down-the-field" American football that lost its running game somewhere back in the 80s in favor of the overly glorified "west coast offense" and passing game. All in all, the only sport I favor over rugby is the one known everywhere but the US as the actual football.

But that's not the only thing I loved about this season. American men's sports rarely ever features the sort of humility, maturity, and soft-spoken-ness of the men on the All Blacks team, including their coach. Are New Zealand men just generally more well-adjusted? It surely seems so. In any event, listening to them was so refreshing compared to the typical macho jarhead-speak we get stuck hearing after the games of any male-dominated American sport. I loved seeing how much love all these guys have at home as well. Not only do they feel humbly blessed to be part of the All Blacks team, but they seem to be genuinely committed to their partners and families. Just seeing the exchange in episode 5 with Kieran Read at home with his wife was something I could rewind and watch over and over for how wholesome it is. You just can tell that guy genuinely adores his family. Where is that sentiment in American football with all the partying, cheating, strip club-going, scandal-steeped ways of U.S. men's sports? It just goes to show you there is a big world outside the USA, and I'm glad Amazon brought us a little glimpse of it.

r sheaReviewed in the United States on June 4, 2018
5.0 out of 5 stars
An inside view of a top rugby nations test team.
It is a good insight into the coaching of the All Blacks and a glimpse into the personal lives of some ABs. Sometimes a documentary reveals more about a story in what it doesnt show. Apart from a bit on the scrum we didnt get to see much of the tight five stories. Thise guys can be very funny. But as an expatriate living in DC it was cool to see the 2016 season story and see a little insight into the ABs. I will be encouraging my US friends to watch it.
11 people found this helpful
See all reviews
Back to top
Get to Know Us
Make Money with Us
Amazon Payment Products
Let Us Help You
EnglishChoose a language for shopping. United StatesChoose a country/region for shopping.
© 1996-2022, Amazon.com, Inc. or its affiliates