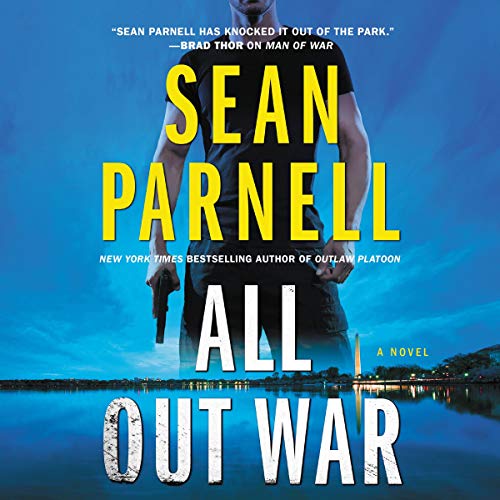 All Out War: A Novel

Special operative Eric Steele, introduced in Man of War, is on the hunt for a formidable Russian terrorist in this high-intensity tale of international intrigue from the author of the New York Times best-selling memoir, Outlaw Platoon.

Badly injured while stopping a rogue agent from obtaining weapons of mass destruction, elite warrior Eric Steele is drawn back into service before he’s ready when unknown assailants break into his home near Pittsburgh, injuring his mother and stealing his father’s pistol.

An Alpha - an elite soldier under the direct command of the president of the United States - Steele is hell-bent on finding the attackers and bringing them to justice. While tracking his foe, Steele discovers he’s become entangled in a far more sinister plan that’s already been set in motion.

A terrorist named Zakayev, once locked away in a maximum-security prison in Russia, has escaped and joined forces with Hassan Sitta, a man who’s shown his prowess and ingenuity with a spectacular bomb planted somewhere in the Middle East that hasn’t been ignited - and no one can find. But that is only the beginning of a horrifying plan that, if it succeeds, will shatter international alliances and bring the world to the brink of war.

Now, the hunted must turn the tables on the hunter - Steele must find a way to stay alive and stop Zakayev before innocent lives are lost.

A. Murray
4.0 out of 5 stars Don’t pass up Eric Steele!
Reviewed in the United States on September 11, 2019
Verified Purchase
I read Sean Parnell’s account of his time in Afghanistan “Outlaw Platoon” (which should be required reading for every American) and decided to give his first fiction novel “Man of War” a shot even though it wasn’t my usual fair. It was a fast-paced thriller that I throughly enjoyed. Parnell keeps the thrills coming in his second novel “All Out War” from almost the very first page. I had to pace myself or I would have lost a good night’s sleep trying to finish it! If you like thrillers, give Eric Steele a shot. I’m looking forward to book three!
Read more
8 people found this helpful
Helpful
Report abuse

Templar110
4.0 out of 5 stars Great follow up to Man of War
Reviewed in the United States on October 22, 2019
Verified Purchase
The sequel to Man of War did not disappoint. The short version of this review is that if you like military thrillers , buy it .
The second novel in Parnell's Eric Steele story shows the contrast between Eric Steele’s pure idealism and an enemy attempting to cut the strings of puppet masters attempting to use him .
I felt the story was presented better then Man of a War, which was good, although I felt a little too rushed in pace .
Again , as always , you have authenticity in Parnells writing of action as he’s kicked doors and expended a lot of brass in his time.
Parnell proved with his follow up novel that he amongst the best in the genre and should be mentioned with Carr , Thor and Greeney .
Read more
3 people found this helpful
Helpful
Report abuse

Ken in PA
5.0 out of 5 stars Awesome
Reviewed in the United States on September 12, 2019
Verified Purchase
Great follow up to the first book. Tons of action. Emotional as well. If you like Brad Thor, you'll love Sean's work.
Read more
2 people found this helpful
Helpful
Report abuse

Linda Schmidt-
5.0 out of 5 stars Exciting and credible
Reviewed in the United States on October 1, 2019
Verified Purchase
Alpha warrior Eric Steele pursues two terrorists, a Chechen and a Saudi, working to create turmoil in the Middle East. We also get to know the faithful, sensitive son, Eric Steele, who is trying to avenge the Chechen who attacked his mother. We also get insight into a Black Site which houses terrorists like the Saudi escaped from. You will enjoy this book!
Read more
2 people found this helpful
Helpful
Report abuse

David
3.0 out of 5 stars Pretty good book
Reviewed in the United States on February 21, 2020
Verified Purchase
But quite unbelievable. Most thrillers are pretty out there but this one goes too far and it becomes childish almost. I like the Eric Steele character as well as his support cast. The plot was good, the characters developed well. Just need it closer to a semblance of reality.
Read more
One person found this helpful
Helpful
Report abuse

anna mullins
5.0 out of 5 stars Amazing book! I knew it would be.
Reviewed in the United States on September 6, 2019
Verified Purchase
I don’t know how Sean Parnell does it but I’m glad he does. He is one of my favorite authors. It is hard to start reading one of his books and put it down.
Read more
3 people found this helpful
Helpful
Report abuse

Patty Coston Webb
5.0 out of 5 stars Action packed from beginning to end
Reviewed in the United States on September 7, 2019
Verified Purchase
Eric Steele does not disappoint in this action intense book with his relentless vengeful pursuit to bring a terrorist threat to an end. You will not be able to put this book down.
Read more
One person found this helpful
Helpful
Report abuse

dianeg
5.0 out of 5 stars Eric Steele
Reviewed in the United States on September 17, 2019
Verified Purchase
A truly excellent book! Book 2 was as good, if not better, than book 1. I highly recommend both books and look forward to the next adventure!
Read more
3 people found this helpful
Helpful
Report abuse
See all reviews

alan jackson
4.0 out of 5 stars Should read
Reviewed in the United Kingdom on January 8, 2020
Verified Purchase
Second book of the series this guy justs get better look forward to the 3rd novel in the eric steele series
Read more
Report abuse
See all reviews