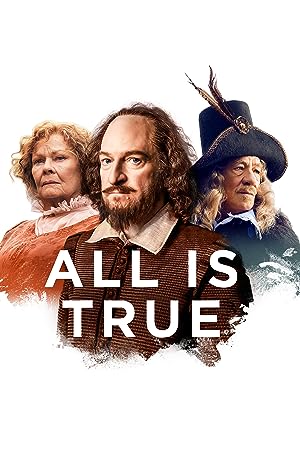 E ResslerReviewed in the United States on September 3, 2019
1.0 out of 5 stars
Trifle
Verified purchase
How can brilliant actors make such a bomb? Beside the historical misrepresentations--such as New Place being a country estate when it was in fact in town, and the the flagrant , seedy assumptions about Shakespeare's daughter Susanna and her husband-- the highest or shall I say lowest insult is to have somehow made the life of Shakespeare boring. And really, Southhampton, slumming in Stratford? And to take the most hideous slander of town low life Lane-- and give it a place in the story of the great man, who labored ceaselessly to reestablish the reputation of his own family, is a shame. And most shameful of all is to have William Shakespeare call his own father thief, when in fact he had raised his father's name to gentleman. I made it through 50 minutes, and refused to waste my time in writing a review--but in fairness to the poet, I had to . Kenneth make a move of winter of 1598-- the dismantling of the Theater in a blizzard, the very beams of which would be used to build the Globe. Make a movie of the early years in London-- the excitement, the outrageous success--let's see Will Kemp do a jig, let's see the Burbages and the birth of modern theater. Make a movie that does tribute to the greatest mind that ever formulated thoughts in our language-- or just keep adapting Shakespeare's dramas to film, you do that well.
57 people found this helpful

The noted British actor and director Sir Kenneth Branagh and his ego are front-and-center in the new “All Is True,” a speculative dramatic account of the final years of William Shakespeare, western literature’s greatest dramatist and poet.

Since first bursting onto the cinematic scene in 1989 with his innovative version of “Henry V,” Kenneth Branagh has enjoyed a reputation as one of Shakespeare’s most perceptive modern interpreters. But while it’s been established again and again in the centuries since his death that Shakespeare was the ultimate people’s poet, with works that can be appreciated by virtually anyone, Kenneth Branagh is decidedly an acquired taste.

In “All Is True,” after London’s famed Globe Theatre burns to the ground in 1613 during a performance of the playwright’s “Henry VIII,” a troubled and self-absorbed Shakespeare returns to his home in distant Stratford-on-Avon to reunite with the wife he left behind--Anne Hathaway, an older, illiterate housewife nurturing resentment for her own unfulfilled life.

The Bard must also confront his conflicted feelings about his two grown daughters, one a bitter cynic on the verge of spinsterhood and the other a humorless victim of maternity, enduring a sort of living death as the wife of a repressed and repressive country vicar.

Tormented by notions of insecurity and failure despite his literary successes, the aging Shakespeare desires little more than to conclude his final years in peace, tending his garden and cultivating memories of his late son and presumed literary heir, who was swept away at age eleven during the Black Plague epidemic of 1597...or was he?

A modern biographical picture turns on an actor’s resemblance to his subject. Branagh has the audacity to open his film with the iconic image of the Chandos portrait, a challenge to the audience that we’re going to see this legendary man come to life. Sadly, when Branagh-as-Shakespeare is dramatically revealed, it’s something of a letdown, a masterpiece of prosthetics as persuasive as someone wearing a mask and a placard reading “Shakespeare.”

It’s not that the makeup’s not realistic--it’s more that Sir Kenneth from some angles more resembles Ben Kingsley as Silas Marner and from others suggests Jose Ferrer as Cyrano de Bergerac. Moreover, Branagh never lets us inside the Bard’s heart and soul. Although author and playwright Ben Elton invests his screenplay with beautiful language and clever dialogue, Branagh gives the words life but never spirit.

In Elton’s telling, Shakespeare is haunted by feelings of inadequacy. The scion of scoundrels, the playwright has been feted by nobles and royals but never accepted among them. And although he’s achieved unprecedented success as England’s greatest poet and dramatist, he’s earned only the scorn and ridicule of his contemporaries Marlowe and Jonson. In Branagh’s reading, we can hear Shakespeare’s voice...but never feel his pain.

Despite all the flowery words and witty dialogue, “All Is True” ultimately becomes Shakespeare Lite, a Cliff Notes version of the Bard’s Life, a sort of “The Lion in Winter of Our Discontent.” The movie catches fire only once, as Branagh’s Shakespeare quotes the text of his famous Sonnet 29 to the once and future object of his affection, the Earl of Southampton, played in a delicious one-scene cameo appearance by the superb Sir Ian McKellan.

Branagh’s Bard recites the sonnet’s lines with all the rat-a-tat affectation of a sophomore drama student showing off for the headmaster. When Sir Kenneth finishes, McKellan’s Southampton, with a wistful half-smile and a twinkle of amusement in his creased and aged eyes, parrots the lines back with all the beauty, kindness, and warmth of the words’ true meaning. It’s like watching an advanced graduate course in Shakespeare Interpretation, and McKellan unsurprisingly earns an A-plus. Unfortunately, Sir Kenneth Branagh, and “All Is True,” finish the class with a B-minus.

“All Is True” was released in Santa Monica, California on December 21 of last year in order to qualify for Academy Award consideration, but earned no nominations. Beautifully filmed by cinematographer Zac Nicholson in England’s Dorney Court, Buckinghamshire, the picture was completed as an independent picture and acquired for distribution by Sony Pictures Classics after production finished.

“All Is True” is rated PG-13 for thematic elements, suggestive material, and language concerns.

Amelie RReviewed in the United States on August 19, 2019
5.0 out of 5 stars
Lovely film!
Verified purchase
I enjoy Kenneth Branagh films and I’m a huge Judi Dench fan, so this was definitely a must-see for me, both on the big screen and DVD. Fantastic performances by three of the most talented actors who are also Shakespeare experts!! There are intense, emotionally charged scenes involving the drama within the Shakespeare family, and some lighter, humorous moments to balance it. It’s still definitely a drama. The production design is also top notch. The many candlelight scenes are beautiful. There are some lovely, sweet moments near the end and it’s wonderful to hear Sir Kenneth, Dame Judi, and Sir Ian reciting Shakespeare at various points in the film! When purchasing this check the region first, because it first was released on region 2 in June and only last week (August 13th) on region 1. Make sure to purchase the correct region!
32 people found this helpful

will crowReviewed in the United States on September 3, 2019
2.0 out of 5 stars
once uncorked
Verified purchase
Shakespeare In Love it ain't! Once uncorked the great and guilty pleasure of seeing Shakespeare in fun and funny ways, in speech and manner that's actually life like has been stuffed back into the keg not to emerge i fear, for another 400 years! Shakespeare In Love was right, and ripe and ribald, and this sad, sullen, sulky wench won't smile. Like the latest attempt to sum up Sherlock Holmes' final days in Mr. Holmes, the movie drags the principle subject through a dismal fate. An afterlife while still alive and full of regrets. Why? What happened to the writers that they would want to make these dull, gray, awful, and melancholy works? What happened to them in childhood that they would take such heroic men and force them to metaphorically stand in line at the DMV for their final act? Drab and horrible porridge comes dribbling out of their mouths with tired, tawdry stuttering words. The mediocre lives of middle school janitors makes this movie look like fun. Who thought it was a good idea to plague Mr Shakespeare with an ignoble, and never ending, unpayable debt to dryer lint? Who constantly puts the pebble in his shoe forcing him to limp through life, and keeping him from finding any kind of mild facsimile of happiness? Everyone, every day has to strive against boredom, despair and misery and the reason William Shakespeare was great was his literal triumph over the eternal conveyor belt of discontent that plows all of us under in the end. This movie, is the antithesis of that, and i am sad to have paid to watch it.
18 people found this helpful

KrkrjkReviewed in the United States on September 2, 2019
5.0 out of 5 stars
Not what I expected but much more than I expected
Verified purchase
The entire time I waited to see this movie, I avoided reading early reviews and critics' comments. There were a few items I accidentally caught in the news that upset me but ultimately proved to be nothing of consequence. All Is True is much more than a brief speculative biography of Shakespeare's last years. It is also an attempt to address many of the persistent questions regarding the never ending debate that historians and scholars have warred over the last couple of hundred years. The story clearly accepts and attempts to explain the Stratfordian view with respect and tenderness. The cinematography is beautiful, the direction by Kenneth Branah keeps the story in focus and wastes no time, Dame Judi Dench is always the consummate actor and supporting cast are all exceptional. A special treat to me was the amazingly emotional score by Patrick Doyle (Sense and Sensibility and Thor) and Abigail Doyle's song of Fear No More from Shakespeare's Cymbeline, Act 4, Scene 2, lines 331-354 is hauntingly heartbreaking. All Is Well is the best movie I have seen in many years, a personal opinion I know but it is all I have to offer.
10 people found this helpful

John FReviewed in the United States on September 18, 2019
5.0 out of 5 stars
better and better with repeated viewing
Verified purchase
Gets better and better with repeated viewing. When I first saw it in the movie theater, I was disappointed, in part because the previews had suggested a jolly comedy in the style Shakespeare in Love. I thought it a three-star movie, visually beautiful and beautifully acted but ultimately forgettable. But a week later I was still thinking about it and had to see it a second time—and now I am grateful to have it permanently available on DVD. Definitely five stars. The moments of comedy are priceless (five stars alone for the cameo performance of Ian McKellen), and the cinematography still impresses, but above all it’s a thoughtful, sometimes dark and often moving, portrait of a very human Shakespeare at the end of his life. Historically it is necessarily speculative but it is at least based on recorded facts. It’s also a labor of love by a great Shakespearean director and actor.
8 people found this helpful

charlene ann jamesReviewed in the United States on June 28, 2019
1.0 out of 5 stars
Don’t buy in USA
Verified purchase
Big mistake, it will not play—-wrong region
11 people found this helpful

EricReviewed in the United States on August 24, 2019
5.0 out of 5 stars
A Beautiful Story
Verified purchase
It is not the typical Shakespearean film. This is sad, and telling. But it is done so in a wonderful way. Well acted and well written, this movie is a beautiful film. I thoroughly enjoyed it, I hope you do too.
10 people found this helpful
See all reviews
Back to top
Get to Know Us
Make Money with Us
Amazon Payment Products
Let Us Help You
EnglishChoose a language for shopping. United StatesChoose a country/region for shopping.
© 1996-2022, Amazon.com, Inc. or its affiliates