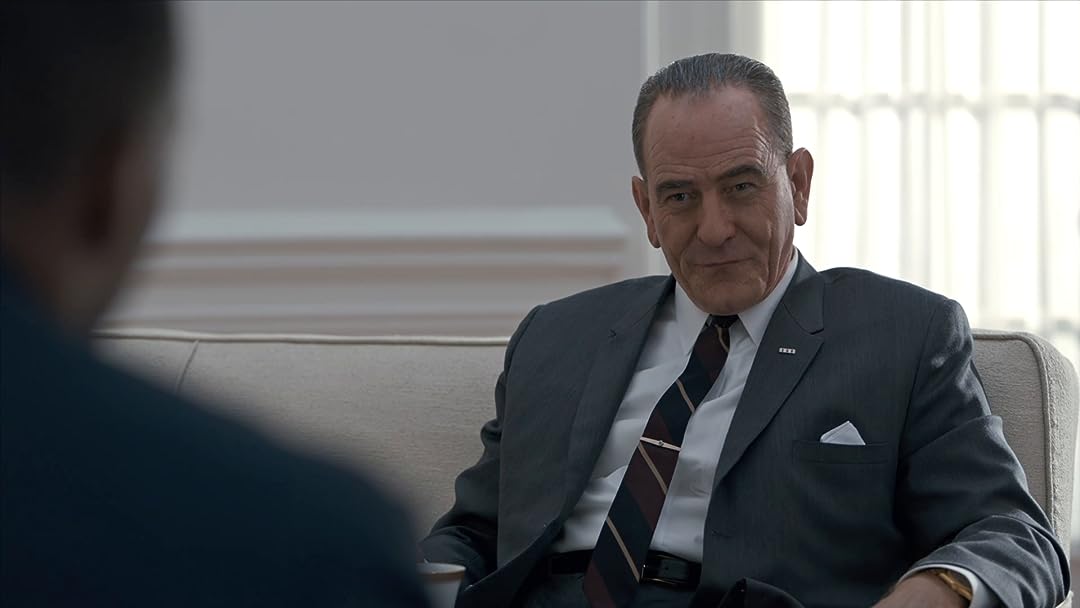 (225)7.32 h 12 min201616+
[HBO] HD. Bryan Cranston stars as President Lyndon B. Johnson in the dramatic story of his tumultuous first year in office in this HBO Films feature.

Amazon CustomerReviewed in the United States on October 14, 2019
4.0 out of 5 stars
Brilliant but Historically Lacking
Verified purchase
All The Way focuses on the Civil Rights legislation while ignoring the role Johnson may have played in JFK's assassination and the role he absolutely did play in the deaths of more than 3 million people in the Vietnam War. Johnson did not "inherit" the war. It was barely a blip in the news when JFK was shot. It wasn't until after LBJ took office that an alleged attack in the Gulf of Tonkin was used as an excuse to fully commit to the military action that, ultimately, cost so many people their lives. The actors were wonderful, the scripting well done, and like others I felt like I was, once again, watching the real LBJ. But as with other movies about his administration, it portrayed him as more sympathetic to Dr. King and the Civil Rights legislation than he truly was, and glossed over the part he played in the pointless and bloody Vietnam War with which I grew up and, but for Nixon, in which I would have fought.
9 people found this helpful
Report abuse

elgrecoReviewed in the United States on September 6, 2016
5.0 out of 5 stars
Excellent film
Verified purchase
Adpated from a play seen at the Shakespeare Festival in Ashland some years ago, I was apprehensive that the conversion to film would cost the drama spontenaiety and vibrance. I was happily wrong. This is a terrific film with terrific acting to boot. A great historical piece that is also a wonderful piece of stage drama re-interpreted brilliantly for film. If you like political history and intrigue, this is a fine investment
16 people found this helpful
Report abuse

D3042Reviewed in the United States on December 4, 2020
5.0 out of 5 stars
Film gives you "The Johnson Treatment."
Verified purchase
It's an interesting portrayal of the 1964 election from LBJ's perspective. Shows the intensity of him and his dramatic excesses -- in his persuasion of others, in his anger, and, more laughably, in his self-pity too. The recent effort to blame LBJ for JFK's assassination is faulty. Even JFK knew there were assassination risks everywhere, so LBJ believing JFK might be killed is not evidence of any participation in it. What's strange is that the alleged guy who killed JFK (Oswald) had also attempted to kill a right-wing segregationist agitator in Spring 1963 (Ret. Gen. Walker). So the guy who killed JFK was pro-desegregation, JFK was pro-desegregation, and LBJ was pro-desegregation. Aside from the Vietnam War, which is admittedly a big "aside", LBJ was responsible for many things we recognize as good about modern American life and government. Anti-poverty, Medicare, Medicaid, fair practices in hiring, promotions, education, public accommodations, housing, and more. All Great Society laws and programs. LBJ is overlooked by recent historians for one important reason. He wasn't from the Northeast.
One person found this helpful
Report abuse

Amazon CustomerReviewed in the United States on November 21, 2017
5.0 out of 5 stars
My Favorite LBJ Movie. Cranston Is Genius!
Verified purchase
Cranston is amazing. I've seen many LBJ movies, and Cranston is by far the best. After a few minutes I forgot I wasnt watching LBJ. Great flick. Civil rights, Kennedy assasination, a bit of Viet Nam, and a whole lot of LBJ's complex personality are encapsulated in this flick. I would suggest this for any history buff or fan of the era. Would love to see a part two of this as they left a lot off.
8 people found this helpful
Report abuse

errin spellingReviewed in the United States on August 7, 2020
5.0 out of 5 stars
we would like you to make part 2 the second year
Verified purchase
this was a very good movie and the second one , we have seen. the other with woody harrelson. the acting was great. it keeps your attention. the poor man did so much good and the evil ones gave him so much pain and hatred. he did a lot for civil rights,that we have today, but the evil racists have not let up and now we are back, at the beginning, in this country.it's a nightmare.
2 people found this helpful
Report abuse

asoloReviewed in the United States on July 10, 2021
5.0 out of 5 stars
Very worthwhile
Verified purchase
Never mind about your own politics or whatever your opinion of LBJ might be. See this movie for Bryan Cranston's protrayal of LBJ...which is absolutely brilliant. The other actors do pretty well trying to keep up but Cranston owns this film. They got the historical contexts right, too. Prepare to be impressed.
Report abuse

Barry GoodkinReviewed in the United States on November 23, 2016
5.0 out of 5 stars
"All the Way" an outstanding film.
Verified purchase
I first saw this film on HBO and I was so impressed that I could hardly wait until I had the opportunity to see it again since it was not released in theaters. Brian Cranston was terrific. The language was strong but I think that was typical of the way LBJ. Frank Langella was also excellent. Anthony Mackie was very good but did not resemble Martin Luther King as I remembered him. I remember Martin Luther King as being physically larger in appearance and much more commanding. All of the supporting players were excellent. Melissa Leo as Lady Bird at times reflected how badly she felt when LBJ reacted so badly when she tried to consoled him. Excellent film.
Barry Goodkin
5 people found this helpful
Report abuse

SarahReviewed in the United States on February 19, 2021
5.0 out of 5 stars
Great Movie, Great Cast, Great accout of History.
Verified purchase
Everyone in America should see this movie and understand this part of our History! Speilberg proves his genius once again. Perfectly cast. (Only King didn't look like King, but acted brilliantly like him). Americans need to know what, why, and how things happened. Why we are at the place we are now. Southern Democrats leaving the party. WHAT A GREAT PRESIDENT THIS WAS (notwithstanding the tragedy of Vietnam). In his humanity, he maneuvered for DOING WHAT WAS RIGHT, which is all a man can do on this go-round!
Report abuse
See all reviews
Back to top
Get to Know Us
Make Money with Us
Amazon Payment Products
Let Us Help You
EnglishChoose a language for shopping. United StatesChoose a country/region for shopping.
© 1996-2021, Amazon.com, Inc. or its affiliates