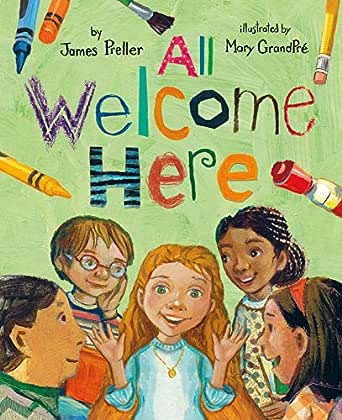 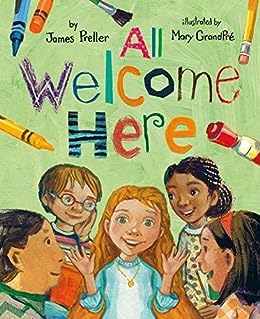 "Caldecott Honoree Grandpré captures the day’s variable moods in pictures of absorbed, interacting kids of various skin tones and abilities. ... a cheery take on the joys of camaraderie."―Publishers Weekly

"Lively haiku pairs with vibrant art to showcase various facets of the first day of school. Cartoonlike, expressive mixed-media illustrations are an eye-catching blend of bright colors, patterns, and perspectives; the multicultural kids and adults further the sense of inclusiveness. With its reassuring and upbeat elements, this may also help alleviate first-day fears as it highlights the many positive opportunities that await."― Booklist

"This is a back to school book, during a year when back-to-school is anything but normal. However, this year is the exception. Next year, or the year after that, back to school will be the same with dozens of eager young five-year-olds nervously getting on the bus, going to school and wondering the same things. This book is for them and it’ll still help them this year as they go into the dining room or living room."―Daddymojo.net

James Preller is the author of the popular Jigsaw Jones mystery books, which have sold more than 10 million copies since 1998. He is also the author of Bystander, named a 2009 Junior Library Guild Selection, Six Innings, an ALA Notable Book, and Mighty Casey, his own twist on the classic poem, “Casey at the Bat.” In addition to writing full-time, Preller plays in a men’s hardball league and coaches Little League. He compares coaching kids to “trying to hold the attention of a herd of earthworms.” He lives in Delmar, New York with his wife, three children, cats and dog.

Mary GrandPre is best known as the beloved artist for the U.S. editions of the Harry Potter series. She is also the Caldecott Honor-winning illustrator of The Noisy Paintbox by Barb Rosenstock. She lives in Sarasota, Florida. --This text refers to the hardcover edition.

4.5 out of 5 stars
4.5 out of 5
23 global ratings
How are ratings calculated?
To calculate the overall star rating and percentage breakdown by star, we don’t use a simple average. Instead, our system considers things like how recent a review is and if the reviewer bought the item on Amazon. It also analyzes reviews to verify trustworthiness.
Top reviews

Erin R Svare
5.0 out of 5 stars Fabulous haiku poems and gorgeous artwork!
Reviewed in the United States on June 18, 2020
We love the way this book shows how all students are welcome in school! The book creatively tells a story of a child's first day through haiku poems paired with gorgeous, vibrant artwork. From the excitement of new materials and learning, the fun of the library and the joy of making new friends, this book is a wonderful gift for a young child. My children are 4, 7 and 11 and all loved it!
Read more
2 people found this helpful
Helpful
Comment Report abuse
See all reviews