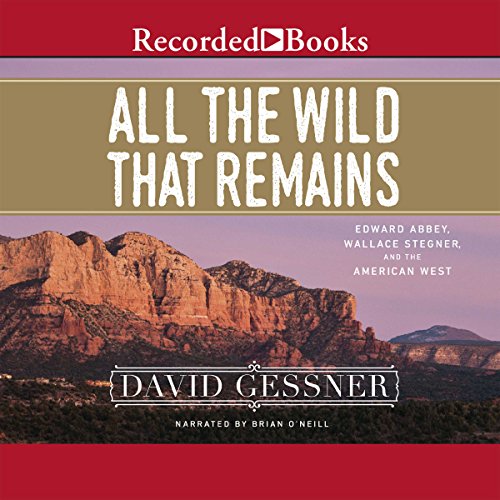 All the Wild That Remains: Edward Abbey, Wallace Stegner, and the American West

A homage to the West and to two great writers who set the standard for all who celebrate and defend it.

Archetypal wild man Edward Abbey and proper, dedicated Wallace Stegner left their footprints all over the western landscape. Now, the award-winning nature writer David Gessner follows the ghosts of these two remarkable writer-environmentalists - from Stegner's birthplace in Saskatchewan to the site of Abbey's pilgrimages to Arches - braiding their stories and asking how they speak to the lives of all those who care about the West. What is the future of a region beset by droughts and fires, by fracking and drilling? What should be done about an ever-increasing population that seems to be in the process of loving the West to death? How might two environmental thinkers with radically different personalities - a competent, mature advocate (Stegner) and a monkey-wrenching anarchist (Abbey) - have responded to the crisis?

Gessner takes us on an inspiring, entertaining journey as he renews his own commitment to cultivating a meaningful relationship with the wild, confronting American consumption, and fighting environmental injustice

Your audiobook is waiting!
Learn more about Membership
List Price: $24.49
You Save: $3.54 (14%)
By completing your purchase, you agree to Audible’s Conditions Of Use
Sold and delivered by Audible, an Amazon company

Amazon Customer
5.0 out of 5 stars Read This is You Love the West
Reviewed in the United States on May 6, 2017
The only thing better than reading Edward Abbey or Wallace Stegner is to read yet another resonating western voice who can explain why these writers captivate us as much as the western landscape itself. David Gessner deepened my understanding of two of my favorite writers and also gave me moments to reflect inward. If you love the west and those who can write its experience authentically, you'll enjoy this book. Best read in the view of landscape such as the photo depicts.
Images in this review

Arthur Digbee
5.0 out of 5 stars A literary travelogue, light double biography, and essays
Reviewed in the United States on September 26, 2017
Verified Purchase
This book is a bit of a genre mashup. Gessner reads (almost) all the books of Wallace Stegner and (Stegner’s briefly student) Edward Abbey. He then drives around the country, visiting these authors’ haunts, talking to their friends and family, and (lightly) reviewing their works and adding his own reflections as a writer and lover of wilderness.

The travelogue is much more urban than wild. Aside from a rafting trip, Gessner doesn’t share wilderness experiences with us. In fact, the longer experiences are the oil boom town of Vernal and some time in Salt Lake City archives. One of my favorite parts was his conversation with other writers of nature – notably Wendell Berry in Fort Royal, Kentucky, Terry Tempest Williams near Moab, Utah, and Doug Peacock in Paradise Valley, Montana.

Indeed, one of the real challenges we face is that too many of us who talk and write about wilderness do so from urban homes. After all, Cactus Ed Abbey wrote Desert Solitaire in Hoboken, New Jersey. Gessner writes from Wilmington, North Carolina. That’s a challenge we all might ponder.

Regardless of place, this is a great book that should be of interest to a wide range of readers. Gessner writes well, and his reflections on these writers are helpful. I know some of all five of these writers’ works, and it was good to learn more about their entire oeuvres. With the other writers, I also gained a renewed sense of place in environmental writing.

JuicesFlowing
2.0 out of 5 stars Not organized at all.
Reviewed in the United States on February 13, 2021
Verified Purchase
First of all, before I get critical, let me say that I’m looking forward to reading more of Gessner’s other books. I like his writing. However, this book is organized in a bad way. It’s part travelogue and also a biography of two different men. What Gessner does though is write about both Stegner and Abbey simultaneously, often times spewing facts about the two men in alternating sentences. He keeps flipping back and forth between the two so often that you can never really get into a groove to digest everything. I don’t know, it makes for a tedious read. If you’ve read a lot about Abbey, you’ll not learn anything new here, and this book is similar to a different book called Finding Abbey, but give Gessner credit for not seeking Abbey’s actual grave. I did learn a lot about Stegner — enough to know that I don’t want to read any of his books. Overall, this book is an interesting read if you are wanting to learn about Stegner, Abbey, and the American West, but I don’t see the point of blending two different biographies into one book, it’s a frustrating read especially if you don’t care about one of the men Gessner writes about.
Read more
2 people found this helpful
Helpful
Report abuse

M Lyon
1.0 out of 5 stars Avoid wasting your time and money!
Reviewed in the United States on August 1, 2018
Verified Purchase
I purchased this book based on the many 4-5 star reviews. I read a couple books on average each week throughout the year and Abbey is one of my favorite American authors. I thought a new perspective on his writing would be interesting and was also looking forward to the tie in with Stegner.

Well, in the end I was very disappointed. So much so that I had to go back and look at the reviews once again since I could not believe we all read the same book. Everyone has their own tastes, but Gessner’s writing style was so off-putting that it was a struggle to finish the book. In the end, I found the other poor reviews for this book (1 & 2 star) resonated more truthfully.

Arheddis Vaarkingjaab
4.0 out of 5 stars Providing a better understanding of the environmental movement and two of it's inspirational intellects
Reviewed in the United States on August 1, 2015
Verified Purchase
As a result of reading "All the Wild," I'm motivated to read more of Abbey and Stegner, particularly "Desert Solitaire" and "Beyond the 100th Meridian. As for Gessner, he ties the two together well, but he sometimes inserts a bit too much of himself or gets breathless about one or the other of his subjects. Hence, this book must be seen as more of a memoir and a meditation than a critical examination of the two writers. There is plenty of examination and the research to back it up, however, and it is a very worthwhile read. Living in the West, as I do, I can perhaps more deeply appreciate Gessner's environmental concerns and arguments and equally deplore the fact that any writer living and focusing west of the Hudson River is viewed as a regional author by too many readers, critics and publishers. The section on Vernal, Utah and the fracking debate are illuminating and troubling.
Read more
5 people found this helpful
Helpful
Report abuse

E. Swan
5.0 out of 5 stars Best Yet for Gessner!
Reviewed in the United States on October 9, 2015
Verified Purchase
This is Gessner's best book yet. I am a huge fan, but this is the most sweeping and powerful piece he's written (and I've enjoyed every one of his books). Sad to say I am a completely ignorant easterner when it comes to Abbey and Stegner. I know that I read and enjoyed Crossing to Safety, decades ago, but clearly I need to go read Big Rock Candy Mountain and Desert Solitaire. Aside from getting a lovely education on these western gems, I loved the travelogue. Gessner never takes himself too seriously and his humor often catches you off guard. There is a great scene during one of his trips where he's at the kitchen table drinking with (wild) Doug Peacock as his daughter Hadley is tucked into the couch watching a kid's show. But Doug is dropping "F" bombs, and every time Doug swears (which is a lot) Dave describes Hadley's head popping up like a prairie dog in alarm. That made me laugh out loud.

The sober account of what has happened, what is going on now and what is to come in the West is sobering. He's done a great job of taking us on a tour, laying it out and asking us to think about it. There's lots to consider about ourselves as well as our country. A great job and a wonderful read.
Read more
2 people found this helpful
Helpful
Report abuse

S. C. Mcgrath
5.0 out of 5 stars I like this book.
Reviewed in the United States on November 24, 2019
Verified Purchase
I am trying to become more of an avid reader and less of a tv and YouTube watcher. I recently made a trip down to Moab, Utah from my home in Belgrade, Montana. Born in the desert Southwest, I always feel at home in the red sand and cactus. This book helped exposed me to a long reading list of not only Abbey and Stegner but others who I feel will help further enlighten me on the environmental challenges that the west faces. It’s funny that I have met one of the persons David interviewed and quoted in this book. In other words, this book is helping me take my head out of the sand. David, thank you for writing this book.
Read more
2 people found this helpful
Helpful
Report abuse
See all reviews

His style of writing is a little odd. It took me a long time to figure out exactly what was going on. Is this travel writing? An environmentalist's screed and call-to-arms? A biography of Stegner and Abbey? A literary analysis of the Western canon? It is all these things blended together. It's a bit confusing and overwhelming at times, but engaging and informative at other points. Gessner hits his stride later when writing about his own travels with his daughter, in my opinion, although his details about Abbey are pretty much fascinating throughout.
Read more
Report abuse

Christopher Hilditch
4.0 out of 5 stars Four Stars
Reviewed in the United Kingdom on November 30, 2015
Verified Purchase
I found this book very interesting and really enjoyed it .
It's a good read
Read more
Report abuse
See all reviews