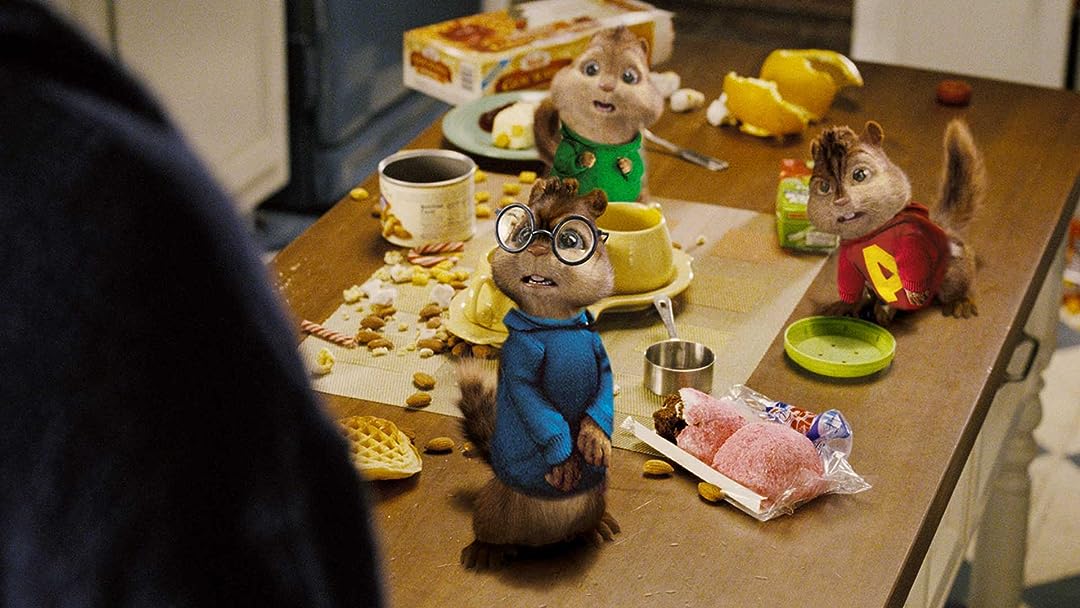 (6,800)
5.21 h 31 min2007X-RayPG
When down-on-his luck musician Dave Seville (Jason Lee) discovers singing trio Alvin and the Chipmunks, he seizes the opportunity to put together his songwriting skills with the 'Munks unique talents.

Amanda BurrierReviewed in the United States on October 10, 2018
4.0 out of 5 stars
Cute movie
Verified purchase
I got my son onto Alvinand the Chipmunks through listening to LPs. He loves their songs so I thought I would let him watch these movies. I was impressed that he liked them since they are live action movies and not cartoons.
3 people found this helpful

Duane A. ChristoffersonReviewed in the United States on January 3, 2019
5.0 out of 5 stars
The grandkids love all of the movies.
Verified purchase
Whenever my grandkids come over for a visit they love to watch Alvin and the chipmunks and all the movies.
2 people found this helpful

Marian M. MatsunagaReviewed in the United States on May 5, 2008
4.0 out of 5 stars
I told you we did a little coloring.........
Verified purchase
I recall my two youngest falling in love with these smart-aleck fuzzballs when they were children, in the 60's. I had purchased an LP (remember those?) of "Alvin and the Chipmunks" for them to listen to, and they practically wore it out! All these years later, comes this film, of the Fuzzy Rodentia that entertained them! I had never seen the cartoon, so the film is my introduction to them.

Kids would have a blast with this film! It's combination of Animation and live action was done well, and the Chipmunks received an updating, to appeal to our modern youngsters. I realize the difficulties when meshing live action, to animation, and I give credit to Jason Lee, for his part in this film.

I found a couple of situations in the film to be a bit over some children's heads, but nothing to take away from them enjoying this film. Some have found the "updating" of the Chipmunks' songs, misguided, or otherwise objectionable. I did not see this. The lyrics are the same, no?

I wonder if Ross Bagdasarian had given thought to the longevity his creation would ultimately achieve? I'm personally glad that he brought his mischievous carpet bumps to such vivid life! Alvin, Simon and Theodore. May they live on for future generations to come!

AmandaReviewed in the United States on August 20, 2020
4.0 out of 5 stars
Son loves these movies
Verified purchase
My one year old loves the Chipmunks movies, doesn't matter which one it is. He will sit and watch it over and over.. i usually have to play it at least twice in a row.

Amazon CustomerReviewed in the United States on March 23, 2021
5.0 out of 5 stars
Product is as expected.
Verified purchase
I somehow did not see that it was only a blu ray when purchasing. We don't have a blu ray player yet, but the disc and case were perfect and new.

HNLReviewed in the United States on March 11, 2021
5.0 out of 5 stars
Silly movie
Verified purchase
Fun for the family. It is pretty silly and does not have meaty content as expected for the movie about talking chipmunks.
Amazon customerReviewed in the United States on December 18, 2012
5.0 out of 5 stars
SO CUTE!!! :D
Verified purchase
who knew - my mom LOVES the chipmunks!! (how cute is that?) i bought her all three movies for mother's day this year and she was thrilled! my dad joined me and mom for a chipmunks marathon - and we giggled for hours!! these movies are fun for any age - and having grown up watching the original...i have to say - i love the new movies even more!! as a kid - i found the chipmunks annoying and wasn't a real big fan...until now! if you have kids and don't have the new chipmunks in your dvd collection - you're missing out on the adorable fun!! :D
2 people found this helpful
See all reviews
Back to top
Get to Know Us
Make Money with Us
Amazon Payment Products
Let Us Help You
EnglishChoose a language for shopping. United StatesChoose a country/region for shopping.
© 1996-2022, Amazon.com, Inc. or its affiliates