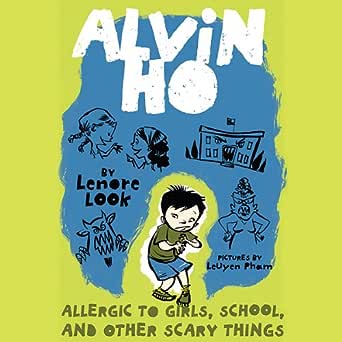 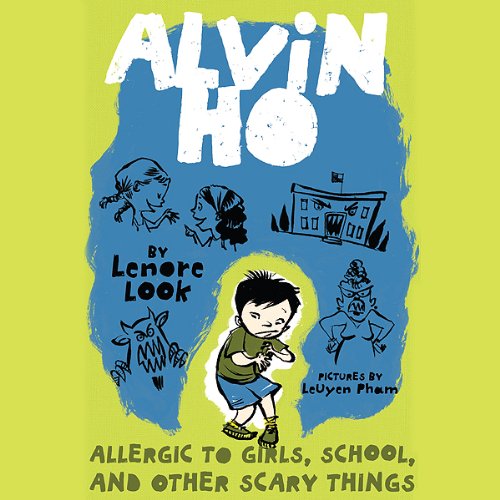 Allergic to Girls, School, and Other Scary Things: Alvin Ho #1

4.7 out of 5 stars
4.7 out of 5
248 global ratings
How are ratings calculated?
To calculate the overall star rating and percentage breakdown by star, we don’t use a simple average. Instead, our system considers things like how recent a review is and if the reviewer bought the item on Amazon. It also analyzes reviews to verify trustworthiness.
Top reviews

A. Peckinpaugh
5.0 out of 5 stars Alvin Ho is a terrific series for 1st/2nd/3rd grade children.
Reviewed in the United States on October 30, 2016
Verified Purchase
These books would be good for boys and girls. My 2nd grade son and I read this entire series together. Every night we looked forward to learning what predicaments the well-meaning Alvin got himself into. Alvin is smart, sweet, creative, funny and tries to be a gentleman. Alvin is also shy, anxious, and unable to speak in public. My son says,"I like to read Alvin Ho. I think these are good books. I hope there will be more, like books #7, 8, 9 and 10! I think the next book should be 'Alvin Ho:Allergic to history, reading and other big stuff.'"
Read more
4 people found this helpful
Helpful
Comment Report abuse

Corrina Wood
5.0 out of 5 stars Great for third and fourth grade
Reviewed in the United States on May 4, 2020
Verified Purchase
I bought this book for a book club with my end-of-the year second graders. They are high readers in this group and do well. I think it would be difficult for most second grade even though the character is in second. It is best for third and fourth. The story is very entertaining and the kids have enjoyed it.
Read more
One person found this helpful
Helpful
Comment Report abuse

Sammi Heilman
5.0 out of 5 stars Adorable Little Book
Reviewed in the United States on February 17, 2020
Verified Purchase
This story was so cute! I read this for my class as well but it didn’t work out for the project. I really enjoyed this book and would highly recommend it for any reluctant readers. The pictures are cute and add to the story nicely.
Read more
One person found this helpful
Helpful
Comment Report abuse

east coast reader
3.0 out of 5 stars Great story. Disappointing quality.
Reviewed in the United States on July 3, 2019
Verified Purchase
I read this book from cover to cover before adding it to my third grade classroom library. I was very disappointed that pages fell out of the book during that first reading. I glued them back in. (Seemed inconvenient and costly to return a paperback book.) The students who read this book for free choice reading definitely enjoyed the plot.
Read more
2 people found this helpful
Helpful
Comment Report abuse

Culinary Kid Lit
4.0 out of 5 stars Super Good Book!
Reviewed in the United States on April 10, 2016
Verified Purchase
Please Note: Posting on behalf of 5yo reader!

"The main character, Alvin Ho, is really scared of things that aren't even scary at all! At school, he's so scared he can't even talk. But Flea, his brother, Calvin, and his psychotherapist all try to help him. Alvin does do a lot of interesting things in this book. He takes piano lessons, he uses mean Shakespearean words when he gets angry, and he even steals hid dad's Johnny Astro.

My favorite part of the book was when Alvin's dad let him fly his Johnny Astro. I also liked when Pinkie dared Alvin to jump off the top of the house. Alvin made an excuse so he could escape. He's so smart!

My least favorite part of the book was when Alvin Ho's dad got very mad when Alvin stole Johnny Astro. To calm down, he played the piano like crazy! That was funny.

One fact that I learned from this book is that in Concord, Massachusetts where Alvin was born there was a war. It was called the Revolutionary War.

I would recommend this book to seven-year olds, six-year olds and five-year olds because it will definitely be super funny to them. They will also learn that it is hard not to be scared when you're like Alvin Ho but you can try!"

Suzan Lawrence
5.0 out of 5 stars Alvin--Ho, ho ho!
Reviewed in the United States on February 14, 2010
Verified Purchase
I purchased this book for a local elementary school library because it showed up on a list of top 20 read aloud books. I am now reading it to a class of second graders who find it, "hilarious." It is a chapter book so an advanced read but it has captured their attention and imagination. The author, Lenore Look, has managed to weave the roots of our country's history as well as art, music, literature and famous historical figures into her very funny story line. Each week that I read, I use the first five or ten minutes to introduce what is new to the children. We have read some Shakespeare (Alvin is allowed to curse in Shakespearean dialogue as long as he doesn't hurt anyone as he is a "gentleman in training.") I have played short snippets of Brahms, Beethoven, and even a song from the Music Man as well as shown works by Frieda Kahlo, Gauguin, and Van Gough. The children had never heard of the Minutemen and the Redcoats and now play the same game on their California playground as Alvin does on his playground in Concord, Massachusetts.

Henry David Thoreau is Alvin's personal hero and we have discussed Thoreau at first because of his strong pro environmental stance in the 1800's. During the week of the Martin Luther King, Jr. holiday, I read from King's autobiography where he credits Thoreau's essay on "Civil Disobedience," for inspiring his method of passive resistance during the Civil Rights Movement.

The students are so taken with the book that they have been to the school library to find out when it was published, one child has already read the sequel--imagine a 7 year old reading a 166 page chapter book! They want to know when the next Alvin Ho book is coming out and have suggested the author create a Christmas special for TV and call it, "Alvin--Ho, ho, ho."

Amazon Customer
5.0 out of 5 stars One of the best books for especially boys but girls like it too
Reviewed in the United States on June 10, 2020
Verified Purchase
Reading this with my 9 year old grandson. He loves it. Laughed and laughed. My 13 year old granddaughter was listening in the other room, then came in and listened too.
Read more
Helpful
Comment Report abuse

Alex Lundrigan
5.0 out of 5 stars Great book
Reviewed in the United States on November 16, 2018
Verified Purchase
My second graders (especially the boys) loved this book. Some of them have started reading others in the series.
Read more
One person found this helpful
Helpful
Comment Report abuse
See all reviews

kinders12
3.0 out of 5 stars book
Reviewed in the United Kingdom on December 16, 2013
Verified Purchase
The book was a bit too difficult for the age group I had in mind. Could however see some similarities.
Read more
Report abuse