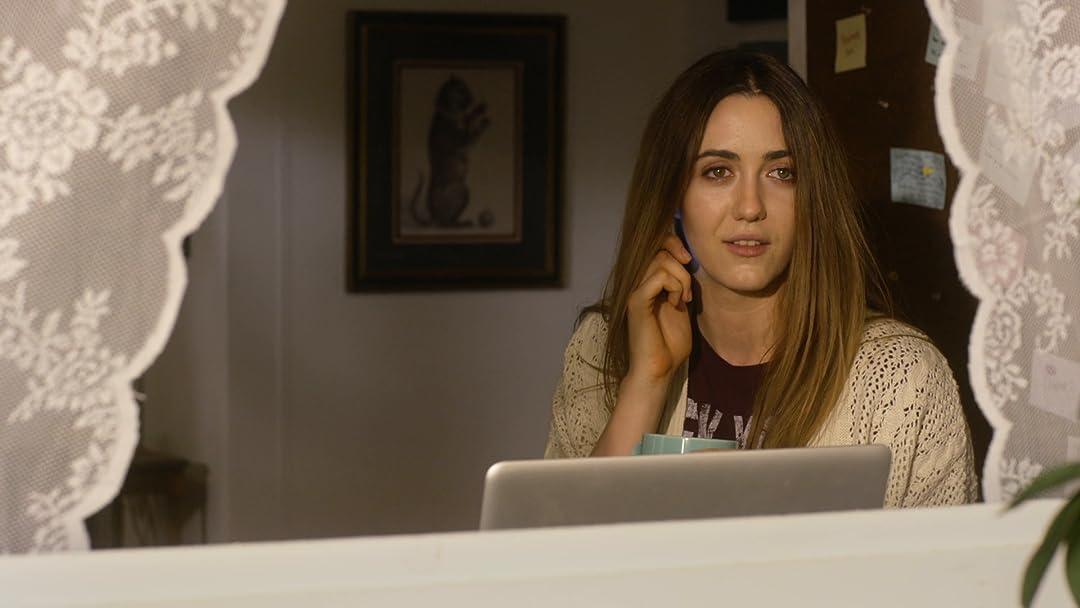 I Am Watching You

(18)
4.61 h 25 min201616+
Nora’s life is at a stand-still when she gets writer’s block for her new book deal, but that quickly dissipates as she catches glimpses of her neighbor’s love life through the window. And when the two finally meet, their physical affair gives Nora inspiration for her book.

H. I. SiegelReviewed in the United States on June 18, 2021
2.0 out of 5 stars
Don't bother
Verified purchase
At least the movie was consistent - less than average script, acting, plot. One could see the "scary" part coming from the beginning. Not worth the time.
One person found this helpful

apeReviewed in the United States on November 3, 2021
1.0 out of 5 stars
is this a joke?
Verified purchase
I don't understand.....is this a joke?

Gary K.Reviewed in the United States on July 25, 2021
1.0 out of 5 stars
Got what I paid for - NOTHING!!!
Verified purchase
This story was credible and may have had a chance were it not for the bad acting, poor script and lousy directing.
One person found this helpful

MiniReviewed in the United States on December 25, 2020
3.0 out of 5 stars
Suspenseful and (at times) triggering...
Nora Nichols (Madeline Zima) is a romance blogger in need of some inspiration. She hasn’t produced a decent blog story in a while, which makes her dream of writing a novel almost impossible. And then inspiration arrives in the form of her dark and sexy neighbor. Lucas (Brian Ames) is a photographer with quite a busy hookup life. Gorgeous models go in and out of his apartment. His window overlooks Nora’s, and she watches him get it on. Fantasies emerge — and soon enough she is writing like the wind. One thing leads to another and her secret window rendezvous become a reality when Lucas knocks on her door one night. He confesses one thing: he’s been watching her too. Another confession: she is his muse. They are each other’s source of inspiration. How perfect is that! She wants a no-fuzz hookup life with Lucas — nothing serious. Lucas, however, has other ideas, and when his advances become too intense and uncomfortable, Nora tries to put distance between them. That’s when Creepy Lucas rears his unhinged head, and there may be more to him than Nora could have imagined.

I signed a three-year TV and podcast deal with MarVista Entertainment and have been binge-watching their stuff for a couple of days now. This one is closest to the genre I write, and it also felt like I was watching my documentary (minus the intimate stuff, thank goodness). Everything down to the “You used me” line Lucas used to (try to) guilt-trip and manipulate Nora was like my experience with someone like this. I liked the L.A. setting. I am also pleased with how the publishing industry was portrayed in this movie. Yes, she gets a book deal rather fast, but she’s a fiction blogger with a large following, and this is the very thing publishers seek: writers with tried-and-true platforms. This was how my work was finally prioritized in the saturated publishing schedule. The only unrealistic thing is how soon Nora's book gets published. Even though publishers put these books on top of the list, it still takes about several months to release. But oh well. We screenwriters are often told to suspend disbelief when drafting a story, so I’m sure that was the case here. The movie is well told, with a 50 SHADES OF GREY gone wrong vibe that appeals to me.

Downsides? The pace is too slow. The film could have used some more dark tones and creepy scenes for shock value. The movie has a Hitchcockian, REAR WINDOW feel to it, and the filmmakers missed the perfect opportunity to take full advantage of that. All those scenes with Nora hanging out and talking to her friends were unnecessary. They impeded the suspense. Other than that, I enjoyed this movie. It was a bit triggering at times, but oh well. Another one I enjoyed was MIDNIGHT AT THE MAGNOLIA, a holiday rom-com that pulls at the heartstrings. I AM WATCHING YOU gets three out of five spinach smoothies, with a tablespoon of rice pudding, teaspoon of peanut butter, pieces of pears, baby orange and baby cucumbers, and a protein shake, for that natural sweetness and creamy consistency. Enjoy!

The Movie GuyReviewed in the United States on November 30, 2016
2.0 out of 5 stars
ONE REAL MOMENT
Nora Nichols (Madeline Zima) writes on-line e-books, trash romance novels. She has been watching the hard body neighbor Lucas Wheeler (Brian Ames) like a Carly Rae Jepsen tune, "Call Me Maybe." Now Lucas also has his eye on Nora. Twenty minutes into the film Nora is using Lucas to help her with her writing blocks. Lucas wants something more...

This is a Lifetime US TV-14 film so you know the limitations. There is groping, Zima in bra and panties, and implied sex. Nora has a circle of friends who make a living with on-line blogs and e-books, which I wouldn't recommend as job, but a hobby.
One person found this helpful

Brenda MullenReviewed in the United States on December 5, 2017
5.0 out of 5 stars
Lucas Wheeler...Brian Ames.....shirt off...you do the math
This movie is a must have to watch Lucas Wheeler take his shirt off. It is well worth the money.

H. GreeneReviewed in the United States on July 11, 2021
1.0 out of 5 stars
More of Amazon Click-Bait
One more in a long line of Amazon jacking up the age-rating in order to sell below average movies. This is a TV-14 made for television Lifetime Drama, which Amazon sells as a 18+ Horror to pull in more audience.
Please, PLEASE, will someone let us "report" Amazon for false advertising and make them refund their click-bait sales.
4 people found this helpful
See all reviews
Back to top
Get to Know Us
Make Money with Us
Amazon Payment Products
Let Us Help You
EnglishChoose a language for shopping. United StatesChoose a country/region for shopping.
© 1996-2022, Amazon.com, Inc. or its affiliates