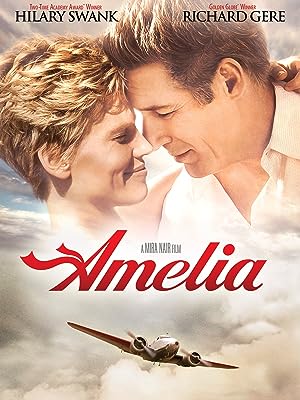 (600)5.81 h 51 min2009X-RayPG
A look at the life of legendary American pilot Amelia Earhart, who disappeared while flying over the Pacific Ocean in 1937 in an attempt to make a flight around the world.

manxcatReviewed in the United States on August 12, 2020
2.0 out of 5 stars
Boiler plate depiction of Amelia Earhart and the 1937 flight.
Verified purchase
I rated this movie 2 stars based upon its general entertainment value, and not on its historical accuracy. Also, the characterizations of Earhart / Noonan / Putnum were shallow and routine in B movies (it's the script and not the actors fault). I think that ALL the movies about Earhart's last flight are centered around her as the heroine; and so, Fred Noonan becomes an alcoholic who was either drunk during the flight... or was totally bombed until the wee-hours of the morning on the day of the flight. There is no real evidence anywhere of his supposed alcoholism except by hearsay or of the apocryphal type... and you can find more contemporary witnesses that strongly state the exact opposite when it comes to Noonan. The "drunk" story-line was also strongly implied in the "Amelia" movie as in all the others. Because, obviously, if it wasn't the navigator's fault... then it had to be the pilot's fault. Noonan did his job: he got them close to Howland Island, where Earhart wasn't able to contact the Island either by voice radio or ab;e tp obtain a bearing on her radio direction finder. (compare Earhart's performance with Anne Morrow Lindbergh's 1933 & 1935 flights with her husband Charles-- where Anne flew the plane, operated the radio and took a number of successful D/F bearings, while Charles was responsible for computing the Celestial Navigation). "Amelia" the movie had good cinematography and seeing the Lockheed Electra in action was a treat. But, of course, it had a very sad ending.
One person found this helpful

Rabid ReaderReviewed in the United States on October 19, 2018
2.0 out of 5 stars
Visually Stunning, but Booooooorrrrriiiiiing
Verified purchase
I can't overstate how beautiful this movie is. The planes, the settings, the costumes, the locations -- every last one of them is more jaw-dropping than the next. But their attempts to spice up the plot with Amelia's very liberal views on love and her place in the world came across as "so what?" Their overall treatment of the real plot -- Amelia's journey was nothing special. It didn't even get that much screen time. You might expect a dramatization of her final moments, or a final shot of her on Howland Island, seemingly triumphant. But it just peters out.
6 people found this helpful

Dragon WagonReviewed in the United States on October 26, 2019
2.0 out of 5 stars
A Lost Opportunity for a Thrilling Adventure Movie
Verified purchase
The life and final flight of Amelia Earhart should have made for an interesting movie. This is not it. When it was released in 2009, the hit television series "Lost" was still on the air. Tom Hanks had starred in "Castaway" 9 years earlier. Do audiences want to see people stranded on an island? Uh, yes! This movie is concerned with showing a historical "glow" on screen and also period costumes and vehicles. If you want guaranteed adventure and thrills, better stick to those Marvel Avenger type movies. There was a character in "Lost" named Amelia. I wonder......
2 people found this helpful

The HeiressReviewed in the United States on January 18, 2017
5.0 out of 5 stars
Beautifully written, directed
Verified purchase
Beautifully written, directed, portrayed and scored. Seeing what a full, courageous life she had, left me in awe. She was a true super hero, absolutely fearless. The film begins with her childhood, shows us all of her major flights, romances, struggles with crews, finances and in the end the failure of the ship Itasca's equipment. Amazing ride of a movie.
3 people found this helpful

Theodore R. ZawislakReviewed in the United States on March 30, 2010
5.0 out of 5 stars
Flight of Famcy
Verified purchase
I am so happy that Hilary Swank wanted to be involved in this Biopic. Even though really important stories from our countries history that affected the whole world are not very popular these days, the film was made anyway. I say this because it was apparent that such a great film was in such limited release. I couldn't find it at any of my local theatres here in South Florida and was very disappointed. So, I had to be patient and wait for the DVD release. Actually, I was able to see it by
doing a pay per view for $6.00, and of course ordered it from Amazon right away. There are so many films made today with such mindless value. It was refreshing to see this beautifully told historical film. I will admit that I am a pilot and love aircraft and flying. However, the love story woven into Ameilia's story was wonderfully told. Richard Gere was the perfect choice for her paramour. Even though the soundtrack was very nice, I was disappointed that John Barry wasn't chosen to do it.
So thanks to the investors, Hilary and Richard and the movie studio for making this important film possible.

Harry PandolfinoReviewed in the United States on June 14, 2014
3.0 out of 5 stars
another Amelia narrative
Verified purchase
I'm not sure this is the best Amelia story yet lensed but it is watchable. Hillary Swank and Richard Gere are persuasive in their depiction of an unconventional love story. There was the conflict between the free spirit Amelia and the doting George Putnam, he who wanted to give her what she wanted and she who had to become an huckster to raise the capital to fund her expeditions. Amelia's affair with Gene Vidal is depicted as well as her return to GP. A bit sleepy at times but it gives you a sense of the personalities while not ultimately answering many questions.
2 people found this helpful

Julia E. MaishReviewed in the United States on March 7, 2010
3.0 out of 5 stars
Amelia buff, but didn't love this
Verified purchase
Just kind of blah for me.

Hilary Swank certainly gave it the old college try, and looked (and sounded!) more like Amelia Earhart than any actress who has ever played her, in my opinion. Kudos to her, and she was the main reason I wanted to own this (also for the 20s and 30s costumes and settings).

I guess if you like old fashioned biopics, you'll like this, but for me it fell a little flat. Not sure why -- I think the script was bit weak and there were some storytelling techniques I'd have expected to see in a film made in the 50s -- the whole thing felt a little tired.

C. BerfieldReviewed in the United States on December 28, 2019
2.0 out of 5 stars
SOAP OPERA
Verified purchase
The parts which follow history are excellent. The parts with all of the writer's input only are pure fantasy. A flying soap opera, at best.
2 people found this helpful
See all reviews
Back to top
Get to Know Us
Make Money with Us
Amazon Payment Products
Let Us Help You
EnglishChoose a language for shopping. United StatesChoose a country/region for shopping.
© 1996-2021, Amazon.com, Inc. or its affiliates