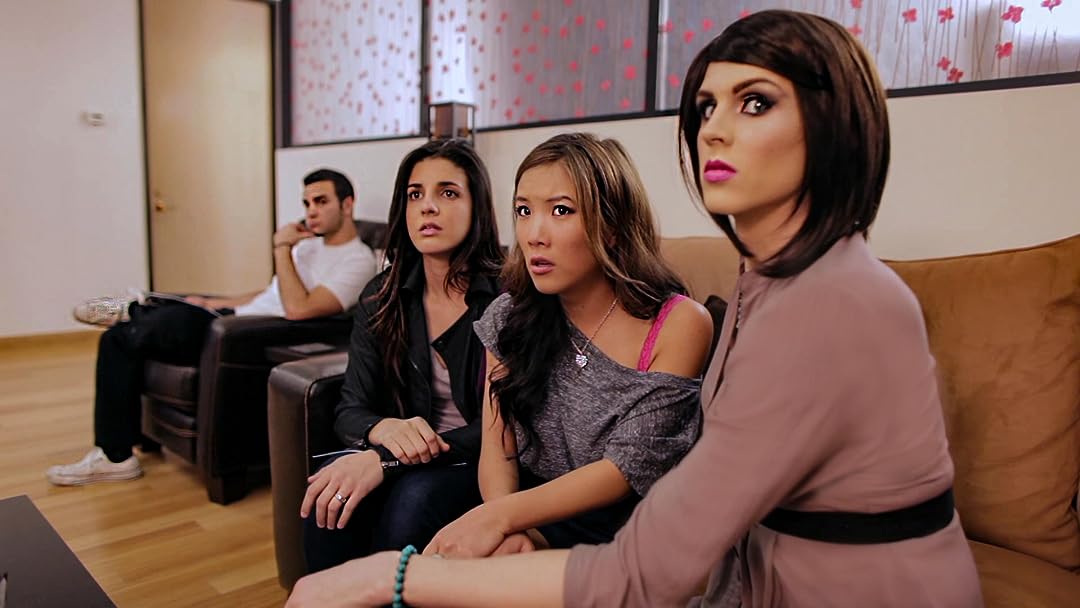 (6)
4.71 h 18 min201916+
It's struggling actress Amelia Cruz's 25th birthday and a barrage of eccentric characters are assaulting her senses. She attempts to not only navigate her way through her day but also - with the help of a mysterious stranger - may find a way to actually celebrate it.

Davo FReviewed in the United States on July 20, 2013
5.0 out of 5 stars
Incredibly Funny Ensemble Cast!!
Verified purchase
I recently rented Amelia's 25h On Demand, because I saw Jennifer Tilly was in it. I am a HUGE Jenn Tilly fan. I would watch her read the phone book, but haven't seen her in a big film for a while. Proud to announce MISS TILLY IS BACK!!! She was hilarious, sexy, bouncing off the walls, and back to her Bullets Over Broadway/Liar Liar/Bound days. And that voice! In addition, Dany Trejo was HILARIOUS, especially in a scene with Margaret Cho, and a buxom African American woman. Wait for THAT scene! I laughed out loud, and then brought friends over to watch it a second time. I pre ordered it, and Cannot wait to get my own copy!! The writing is hilarious, the supporting cast is really really incredible, and you recognize a lot of them from different films.

If you are an indie movie freak, this is one of the best indie comedies I have ever seen. In the spirit of Garden State, Juno, 200 Cigarettes, and Harold & Kumar. Quirky & irreverent, you will laugh from beginning to end. There is some strong language, so if you have kids, it may not be the best to have them in the room. But send them to Grandma's!! Stand out performances by Jennifer Tilly (Of course), Danny Trejo (in a comedy- you don't usually see him NOT killing someone, but he's really funny!), Margaret Cho, Ashley Parker Angel, a big buxom actress (Shana Gregory), and a cross dressing neighbor, who it took me a second to realize was a guy (David Lewis). Oh- and the legendary director Robert Rodriguez plays a small role also. As far as I can tell, that is his FIRST on screen role where he is not the director. A true ensemble piece. It moves fast, light, and a surprise ending that kind of brings it all together. Rent it, buy it, make it yours, but not before I get my copy!!

Kevin ConneryReviewed in the United States on March 26, 2017
4.0 out of 5 stars
Excellent script!
Verified purchase
I can't improve on Sarah Johnson's review, but do have a couple of caveats.

The acting is extremely spotty. Many scenes are dead-on, but many others feel like the first rehearsal of a high school play, like the actors are just reading the lines for the first time.

Sound is very iffy; the redubbing of many scenes is very obvious.

But the storyline, pacing, and editing are all fine, and I do recommend the movie overall.

Sarah JohnsonReviewed in the United States on August 10, 2013
5.0 out of 5 stars
Endearing Indie Comdedy Built to Last
Verified purchase
I was cruising On Demand one day, when I saw this great title- "Amelia's 25th". I am glad it started with an A, or else I might not have clicked on it. I thought it might be a bit high-brow from the title, perhaps it was about a symphony, or else Amelia Earhart? After looking up the description online, I immediately ordered it. The film is chalked full of amazing Independent film stars, laughter and witty language. It is peppered somewhat with un-even performances, especially by the 2 leads, but this is definitely made up for within moments of the film's opening sequence.

Amelia (Electra Avellan- "Machete" & "Grindhouse")is a struggling bi-lingual actress who is a bit down on her luck, but still has a lot going for her. She is late on the rent, late on her auditions, and late on her monthly visit from "Aunt Flo". Her agent asks her to lose the accent, and informs her she is over the hill in Hollywood. This is difficult for Amelia, as her father is a famous film director (Robert Rodriguez "Sin City", "Machete") Mostly, this day is more than usually depressing to her, because it is her 25th birthday, which to most people wouldn't be that much of a milestone, except that own mother passed away at 24, which now makes Amelia brood on her mortal existence, probably much more than she would on any other birthday. The day you become older than your parent is always a sobering experience. A cross dressing neighbor (played divinely by David Lewis) gives her the number of the psychic who lives in the building (the ever glamorous ball of fire Jennifer Tilly) to perhaps help her sort things out in life and deal with her non relenting day. While in her session with "Miss Cellie" (Tilly), she feels once again ripped off and a bit cheated, as Tilly banters with dead movie stars, drinks whiskey and rolls cigarettes, laughing all the way. But little does Amelia know, Miss Cellie's revelations will all come to light, in a way she will least expect it.

Amelia's boyfriend is a struggling producer who seems to always just be a day late and a dollar short, until he meets with Don Javier (played marvelously by mega action star & all around bad guy Danny Trejo) who obliterates his chances of ever working in Los Angeles again. Avoiding the land lord on the late rent will be in his immediate future. But Trejo's character has far more to worry about as his wife and Angelina Jolie-esque movie star (Karin Kelts- "Lost Everything") has just had a very public break up with him in the tabloids and has embarrassed him beyond words, leading him to take action. His quest to destroy his wife, and expose her infidelity leads him to a sex shop where he meets two hilarious "sex-perts" (Margaret Cho and Shana Gregory Williams in what is probably the film's most raunchy and side splitting scene). After a change of heart, he tries to reconcile with his wife and the public eye.

Through a myriad of quirky, slimy, and down right mean Hollywood types, Amelia takes a Lewis E. Carol-esque journey through a modern Wonderland in the city of angels. In the end, like all the other characters in this film, Amelia is given a choice, literally between two unknown brown paper bags. She eventually chooses life over brooding and negativity, and to be happy with the choices she has made for the future. In one of the strongest scenes, a mysterious stranger who used to be on the Cosby Show (no spoiler alert here "for the sake of the plot"- Mark Whittington)tells her "if you spend your entire life wondering what is in that other bag, you will never truly enjoy that egg-salad sandwich". She realizes that love and magic has been in front of her the entire time. Much like when Dorothy is told she had the power to go home all along, Amelia has been standing in Oz the entire time, she just needed someone to shake her, and shake her he does.

This is an edgy, funny, dark, ensemble comedy that Indie film lovers with devour. Many strong performances make up for at times a thin script, and un-even performances by Nicholes Cole and Electra Avellan. Director Martin Yernazian does a skillful job of treading lightly and not hitting you in the head with a message. At the same rate, Avellan has never been as good (or as beautiful) as she is as the brooding but charming Amelia, so you can definitely see Mr. Yernazian's handy work there. Stand out performances by tween pop idol Ashley Parker Angel as the soft porn star who has his eye on Amelia, Danny Trejo, Margaret Cho, and the stunning Jennifer Tilly put this film over the top. Then up-comers really take the film to the next level, Shana Gregory Williams, Mark Whittington, Karin Kelts, Courtney Cole, Kameshia Duncan, & David Lewis. The rest of the cast is chalked full of names and faces you recognize and revere if you follow independent film- the likes of James Duval ("Go", "Independence Day"), Ally Maki ("Geography Club"), Melissa Ordway ("Ted", "A Very Harold & Kumar 3-D Christmas"), the rarely seen & always great Jon Abrahams ("Meet The Parents", "Scary Movie"), and cameo appearances by Playboy Playmate Anna Sophia Burgland with the legendary director Robert Rodriguez (in his first on screen role).

In all, this is a delightfully dark and dirty comedy that is terrifically shot, well acted, and a modern day fairy tale in the film industry's dirty city of angels. If you are looking for the meaning of life, or need to spend the evening brooding over the holocaust (Much like Amelia), this is not the film for you. If you would like to laugh uproariously, while cuddling up on the couch with or without someone wonderful, this is a must-see Indie film which will survive the test of time.

I read the review on this site by Mr. Lee, and think that this man is most likely an idiot, or else so pedantic that he couldn't see the forest for the proverbial trees. His spelling is off a bit also. When naming an Academy Award nominated actress and lauding her performance, perhaps you should get her name correct- JENNIFER TILLY (not "Tinny" as listed by Mr. Lee- how embarrassing), especially if the production company sent you a copy to view for free- I BOUGHT mine.
2 people found this helpful

KarinReviewed in the United States on October 9, 2015
5.0 out of 5 stars
A feel good fun sexy film!
Verified purchase
This is a fun film. It has a heart and some of the actors, like Danny Trejos is so comical. Nice to see him in a comedic role. And Jennifer Tilly is stunning!
Overall a feel good film that is also smart!

litehawkReviewed in the United States on April 13, 2015
4.0 out of 5 stars
Four Stars
Verified purchase
very funny movie
See all reviews
Back to top
Get to Know Us
Make Money with Us
Amazon Payment Products
Let Us Help You
EnglishChoose a language for shopping. United StatesChoose a country/region for shopping.
© 1996-2022, Amazon.com, Inc. or its affiliates