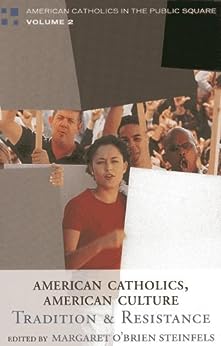 Volume 2, American Catholics, American Culture: Tradition and Resistance, is introduced by Peter Steinfels and Robert Royal. Part One, "Against the Grain," explores the philosophical and practical differences between Catholicism and American culture on issues in sexuality, marriage, abortion, stem cell research, women's rights, and physician-assisted suicide. The essays attempt to mediate the divide between Catholicism's communal and personalist view of the human person and the American preference for autonomy and pluralism. Part Two, "Popular Culture & Literature," confronts the role and interaction of the Church in popular culture and explores the identity of the "Catholic" writer on the literary page and in the media. Part Three, "Anti-Catholicism: The Last Acceptable Prejudice?" endeavors to define what anti-Catholicism is, where it is found in North American culture, what it means for maintaining group identity, and how it can be interpreted as an American or religious phenomenon.
Read more
Previous page
Next page

This volume of essays so exemplifies civil yet strenuous exchange on volatile topics in contemporary Catholicism that it exceeds a search for common Catholic ground and becomes instead that much-praised, seldom-found reality: a community of discourse... I recommend the volume to anyone seeking a constructive path in divisive times, to parish clergy, to women and men religious, to all interested in U.S. civic life, and to faculty and students doing courses in theology, American history, cultural studies, or Catholic studies. ― America: The Jesuit Review of Faith & Culture

This volume is a valuable contribution to what it calls a 'vigorous and articulated religious participation in public affairs' and should be in any library keeping abreast of current issues. ― Library Journal
--This text refers to the paperback edition.

Margaret O'Brien Steinfels, co-director of American Catholics in the Public Square project, was the editor of Commonweal from 1988 to 2002. --This text refers to the paperback edition.