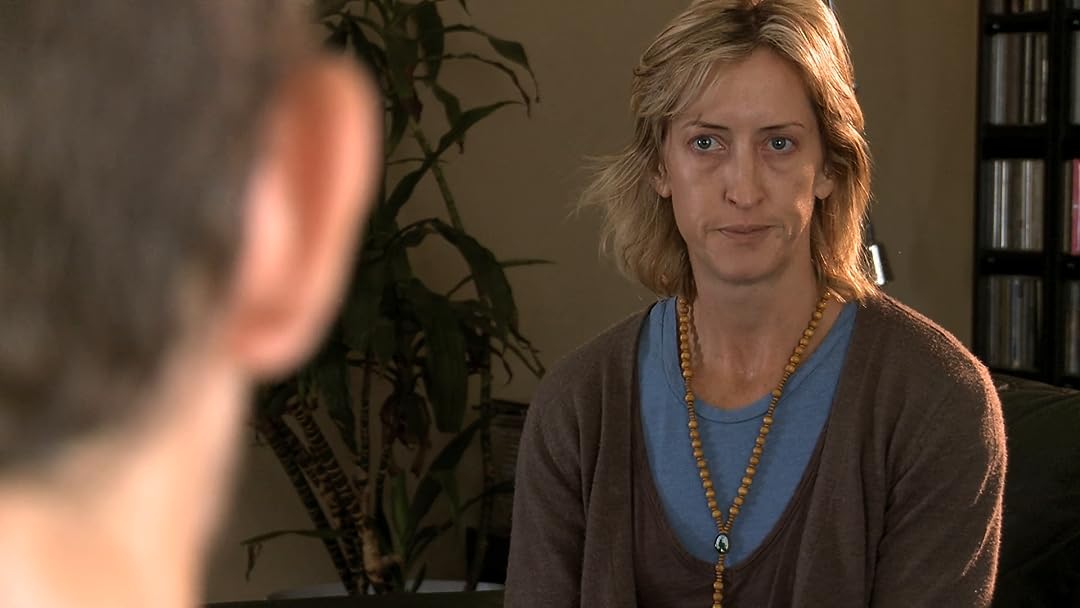 (396)
1 h 29 min201218+
Paul Anderson (Stephen Twardokus) and his girlfriend Stella (Liesel Kopp) move into a house that is well known for being haunted. Paul, a struggling writer plans to write his first novel about his experiences with the paranormal. What starts out as a fun and exciting adventure, soon takes a very dangerous turn. They quickly realize what you can't see can hurt you.

Linnea JacobsonReviewed in the United States on April 22, 2021
5.0 out of 5 stars
Overlooked Gem
Verified purchase
Simple, low-budget scares (sheet ghosts!) but they're used effectively. So effectively, in fact, that after I saw it, I had to strip all the sheets off my bed and sleep on a naked mattress. I'm not kidding. I haven't been this scared since the first time I saw Ju-On, back in 2002.

The first 20 minutes or so are really slow. I got complaints about this when I watched it for the second time with a couple of friends. But if you stick with it, I promise it ramps up really quickly and never stops. The complaints stopped 100% after that scene with the cupboards.

The scares may be low-budget, but ultimately, some of the best ones are. Michael Myers dressed up in a sheet is arguably the scariest moment in Halloween. The makers of An American Ghost Story understand this principle, that the simplest things can be terrifying.

CynthiaReviewed in the United States on May 24, 2021
5.0 out of 5 stars
I really enjoyed it, and not a swear word in sight
Verified purchase
I am not keen on all the blood and gore type horror films that leave nothing to the imagination, so I quite liked this film. I thought that it was well done, especially since it was a low budget film that seemed really to be a two man production, their name.

At first I was wondering why he never turned the lights on, but after thinking about it, he never would have seen anything with the lights on and he would have accomplished nothing by doing that. I didn't have any problem with him only using a tape recorder and no other devices because he wasn't out to prove anything, except to himself possibly. His object was to write a book. It wasn't as though he was a paranormal investigator who had all the gear. This was the only house he was interested in, and he didn't move into this house because it was all he could afford, it was because he had reason to believe it might be haunted.

Some people have complained about ghosts under sheets, but there was a reason for that that was built upon from the beginning, and they were used effectively.

The acting was pretty good over all, except that I didn't think the girlfriend was very believable in the kitchen scene and just after.

I would much rather watch a low budget film that was well done like this one, making the most of their limited resources and using imagination and ingenuity, than one of those big, expensive so-called blockbusters with all of that fake CGI and the same type of forgettable blasting orchestral music from one film to another that just falls flat with me and bores me silly, but then I'd rather watch Ray Harryhausen's dinosaurs fighting any day. What a lot of work must have gone into that.

I have raised my rating from my original 4 to 5 stars because I realised since watching it that there was no swearing or anything off-colour. It is so refreshing to see a modern film where people can talk to each other without the continuous use of the f word adjective over and over. I hate the use of unnecessary and gratuitous f words, which shows a lack of basic knowledge of vocabulary. I grew up in a household where there wasn't any swearing, and it really offends me to hear it constantly, as well as being distracting and bringing down the tone of any film to a lower level than it otherwise would have been.

I liked the ending. It was subtle compared to what had gone on before, and, I thought, perfect. There had already been a big confrontation scene. There didn't need to be another one, and it left something to the imagination about what would happen next. What you imagine can be far more frightening than what somebody can film and put onto a screen. All of the horror greats used to say so, and it's really sad if you need to be shown every little thing.

I really liked the music and thought it was perfect for this film, especially for the part near the end.
3 people found this helpful

HermanatorReviewed in the United States on September 6, 2020
3.0 out of 5 stars
not a bad little flick
Verified purchase
It kept me interested and made me jump a few times. However, the ending really let me down. While it could have been a much worse ending, still it left me going....seriously?? But still, not a bad movie. Here is the problems I have with it. He brought no emf devices or spirit boxes with him. He had no video cameras. If you are gonna write about something, you need proof. Anybody can SAY they saw something but nowadays you need proof. You never, ever, ever taunt ghosts, especially mean ones. You are just asking for trouble. He obviously wasn't too bright or informed about the paranormal. Lastly setting up the house to look like it did at the time of the murders is sick. He is lucky that is all that happened to him. The moral of this movie is......before you delve into the supernatural you might want to know something about it first or you may never be the same!!
6 people found this helpful

Yafa Crane LuriaReviewed in the United States on December 6, 2020
1.0 out of 5 stars
You can definitely skip this one
Verified purchase
1. Unoriginal plot
2. Really slow paced
3. Some jump scares that don't take the plot anywhere. Nothing is revealed and nothing escalates.
4. Really bad dialogue
5. Really bad acting
6. The main character is a jerk
9 people found this helpful

O BashamReviewed in the United States on June 20, 2021
2.0 out of 5 stars
Boring and Mostly Very Amateurish
Verified purchase
I didn't even finish the movie because of just how boring and lifeless it got towards the last 1/5th, so I can't comment on the ending. There were times when I looked away for a couple minutes and looked back just to make sure it didn't stop playing or just end. It really is that terrible.

It also looks as if it were filmed by a teenager trying their hardest, and no, I'm not speaking about the camera or lighting quality, I'm speaking about the directorial choices and script. but I can look past even that as long as the plot and story go somewhere, and unfortunately everything just falls apart after the second half.

There is of course the obligatory *LOUD SOUND WHEN THE CAMERA SHOWS A SILLY THING* jump scare nonsense—another hallmark of amateurish filmmaking—but there were a couple almost decent moments in here too, which is why I'm conflicted about giving this movie a single star, or two. But really, that this movie gets two stars from me is not a testament to its worth, but to the sheer awfulness of other movies for which it must be compared. Again, this is not an endorsement, but not for movies which are entirely unwatchable, this would be a 1-star.

Unless your standards are just very low or non-existent, you'd be better served spending your time watching or doing something else.
One person found this helpful

EMMReviewed in the United States on October 4, 2018
3.0 out of 5 stars
Not A Bad Little Ghost Movie
Verified purchase
If you're looking for horror, demons, scary faces, and gore, this is NOT the movie for you.

I'm always looking for good ghost movies and they are hard to find. I'm not a fan of pure gore, demon, possession type movies. I just want a good scary ghost story (eg 1980 movie "The Changeling").

As others have said, the production value is a bit low, but it doesn't really detract from the film too much.

It's got some genuinely creepy scenes. Overall, the people in the film weren't making stupid choices, being irrational, or overly dramatic. They just seemed like regular people--which I liked.

1. The lack of using the damn lights. Any person dealing with creepy ghost stuff would flick on the light switch and not use a flashlight the entire time. I know the creep factor goes up when you're in the dark, but it wasn't realistic to me and that kinda bugged me.

2. The ghostly sheet towards the end of the movie was a little funny to be honest, but it was used in a unique way, so I'll let it pass without much of a complaint. I think it could have been shot better.

Overall, a nice little spooky ghost film that makes you feel a bit on edge and uneasy at times. :)
6 people found this helpful

JenniferReviewed in the United States on June 25, 2017
4.0 out of 5 stars
I liked it!
Verified purchase
Though not perfect, I really enjoyed this film. I'm not a fan of slasher/blood/gore type movies, and most Hollywood produced ghost stories leave me disappointed. I find a movie about ghosts effective for one reason - does it give me the creeps? Does it get under my skin and stay with me, long after I've seen it? There were a few eerie scenes in this film that did just that. It was obviously low budget, which some people don't like. And it did resort to a few old tricks, such as the overdone kitchen cabinets opening thing, and the chairs stacked up, like in the first Poltergeist and too many other movies. But I thought a lot of it was very original, and the part where he was woken up in the middle of the night and heard the children whispering about him - that was really creepy! Some things I didn't understand - like why he used a flashlight all the time Instead of turning on the damn lights....but, for the most part, it was an entertaining movie!

If you liked it, there is another low budget film that l think is worth checking out, it's called "Deadly Presence"
8 people found this helpful

James E. AddisonReviewed in the United States on July 4, 2021
1.0 out of 5 stars
1.5 stars.....
Verified purchase
HEY PRIME. PLEASE MAKE SEEING YOUR PREVIEWS AN OPTION SETTING SO I CAN STOP THEM FOREVER!
1 stars: Couldn't watch more than 15 minutes. Unwatchable, or language not as described.
1.5 stars: Just started it to get if off my, "movies we think you'll like", list permanently.
2 stars: Jumped my way to the end for the ending. Unwatchable, but interested in how this turd ended.
2.5 stars: I fell asleep, or closed my eyes for most of it.
3 stars: Watched it all, but not happy about it. Nothing better to do.
4 stars: I watched it, liked it well enough. Would never watch it again.
5 stars: Great moving picture show! I'll watch it again, and maybe again in a few years.
See all reviews
Back to top
Get to Know Us
Make Money with Us
Amazon Payment Products
Let Us Help You
EnglishChoose a language for shopping. United StatesChoose a country/region for shopping.
© 1996-2022, Amazon.com, Inc. or its affiliates