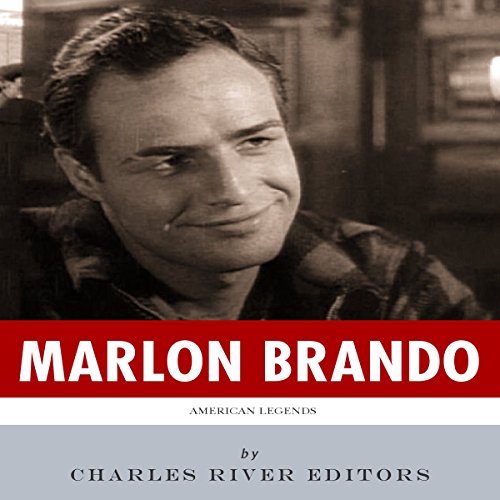 "He is the marker. There's 'before Brando' and 'after Brando'." - Martin Scorsese

A lot of ink has been spilled covering the lives of history's most influential figures, but how much of the forest is lost for the trees? In Charles River Editors' American Legends series, listeners can get caught up on the lives of America's most important men and women in the time it takes to finish a commute. And they can do so while learning interesting facts long forgotten or never known.

Marlon Brando. Few names in the acting profession evoke such a strong, almost visceral reaction. Over the course of his long, prolific career, he was considered perhaps the greatest actor of the 20th century, as well as one of the most complicated and misunderstood. Uniquely able to be both emotionally charged and technically constrained in the same performance, he single-handedly changed the direction of not only the American style of acting, influencing successors such as Robert De Niro, Al Pacino, and even Johnny Depp, but the acting profession on a global scale. His iconic interpretations of characters such as Stanley Kowalski (A Streetcar Named Desire), Terry Malloy (On the Waterfront) and Vito Corleone (The Godfather) have been forever burned into the collective memory of film and theatre aficionados, scholars, and critics for their immense passion, rage, love, defiance, vulnerability, cruelty, and tenderness - basically, the full spectrum of the human condition.

Special invitation from Audible!
Learn more about Membership
List Price: $6.95
You Save: $0.96 (14%)
By completing your purchase, you agree to Audible’s Conditions Of Use
Sold and delivered by Audible, an Amazon company
Share

3.6 out of 5 stars
3.6 out of 5
5 global ratings
How are ratings calculated?
To calculate the overall star rating and percentage breakdown by star, we don’t use a simple average. Instead, our system considers things like how recent a review is and if the reviewer bought the item on Amazon. It also analyzes reviews to verify trustworthiness.
Top reviews

Felice Tanenbaum
3.0 out of 5 stars Who was the real Brando???
Reviewed in the United States on April 1, 2018
Verified Purchase
What I liked the most is that I met Marlon Brando at a party in 1959. It was so interesting learning more about him by reading the book.

What I liked the least is the information about all his affairs, especially all the children that came from that. By the way, it said nothing about Rita Moreno and the fact that she contemplated suicide after he dumped her. There was a lot of media coverage at that time.

It's a shame he had so many children, as I don't think he was meant to be a parent at all. He was a mixed up, immature man with so many unresolved issues. I felt sad knowing how he was so accomplished, yet was a rebel, and reckless to the end.
Read more
Helpful
Report abuse
See all reviews

M
3.0 out of 5 stars American Legends: The Life of Marlon Brando
Reviewed in the United Kingdom on November 8, 2012
Verified Purchase
Book was very short and not very informative. It contained nothing about Brando that couldn't be looked up in Wikipaedia. Glad I didn't pay anything for it.
Read more
One person found this helpful
Report abuse
See all reviews
Back to top
Get to Know Us
Make Money with Us
Amazon Payment Products
Let Us Help You
EnglishChoose a language for shopping. United StatesChoose a country/region for shopping.
© 1996-2022, Amazon.com, Inc. or its affiliates