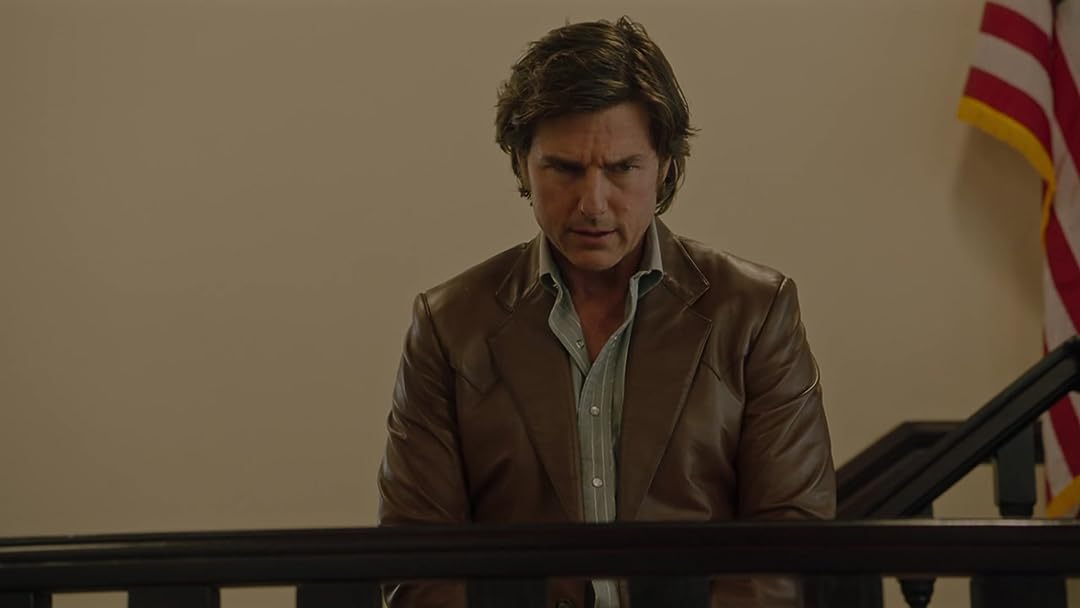 (16,716)
7.11 h 54 min2017X-RayHDRUHDR
Tom Cruise reunites with his "Edge of Tomorrow" director, Doug Liman, in this thriller based on the outrageous true story of Barry Seal, a hustler and pilot unexpectedly recruited by the CIA to run one of the biggest covert operations in U.S. history.

Nashoba LosaReviewed in the United States on January 30, 2018
4.0 out of 5 stars
Not the run of the mill move of this genre. Watch closely for the many pearls hidden within.
Verified purchase
Was surprised by this movie as I did not research it or even read the description on the jacket. Very interesting way of telling the movie via the first party and and the recordings and video. That was actually pretty cool. And there was a definite and finite ending to the story. I actually find that the plot is believable and that the amount of money and sheer terror and fear generated by the activities could be very real in such situations. Having managed three hospitals from the southwest corner of Arkansas to the southeast corner of the same state, I find the willingness of the bankers and other local folks to be quite realistic in their actions as I saw much of the same in real life. Money and power are very important to folks who have less of them than they want. So, to me, the local Arkansas dealings were realistic. And everything I have read of a serious nature about the Company fit with the activities of those folks in the movie. I'd say the Producer and Director hit a triple with this movie, if not quite a home run.
53 people found this helpful

David E. BaldwinReviewed in the United States on January 7, 2018
5.0 out of 5 stars
Livin' The Dream
Verified purchase
Barry Seal (Tom Cruise) pretty much lived large for a spell in the late Seventies through the early Eighties. He had pretty much everything which included wealth and the love of an extremely hot woman. His hand was in many pies some legal, some illegal, and some questionably legal. It wasn't so much the wealth, sex, and rock 'n' roll that Barry craved but the shear adrenaline rush of the chase. Many accomplices to his activities would include President Ronald Reagan, then Governor of Arkansas Bill Clinton, to his no-account white trash brother-in-law. His inevitable downfall was a classic case of overreach. But what a thrill ride! Cruise plays Seal with equal parts brio and relish. He really seems engaged and having fun with this part and it shows. Best I've seen him in years. Doug Liman directs the film at a dizzying breakneck pace not unlike his previous collaboration with Cruise, "Edge of Tomorrow". Flick flew under my radar on initial release. Don't make the same mistake.
44 people found this helpful

Daniel B.Reviewed in the United States on January 4, 2018
5.0 out of 5 stars
Great entertainment!
Verified purchase
Several reviewers have complained that this movie, which purports to be “based on a true story”, is not an accurate historical presentation of either who Barry Seal was or the events he was involved in. My feeling is that if you’re looking to Hollywood to present an accurate historical document, you’re setting yourself up to be disappointed. Accurate history is not what they do out there. What they’re supposed to be doing is making movies that entertain us for a couple of hours, and lately I think they’ve been failing at that more often than they’ve been succeeding.

In this case, though, they’ve produced a highly entertaining movie without the need for either scene after scene of unbelievable (and impossible) “action” sequences a la the MI movies or the Fast & Furious series, or the endless blood lettings of Tarantino and his imitators. While I suspect the storyline bears virtually no resemblance to what actually happened, who cares? This isn’t a documentary. It isn’t even a docudrama. What it is, though, is a really entertaining way to spend a couple of hours. Tom Cruise heads an excellent cast who all turn in great performances.

If you really want to know the truth about what happened regarding either the Sandanistas, the Medellin Cartel, Iran/Contra, or Barry Seal, you’re going to have to do some serious research, particularly given the fact that you can’t truly believe anything you hear from our media these days. You won’t find it by watching this flick. On the other hand, if you want to be thoroughly entertained by a movie that is both interesting and, at times, funny as well, I recommend this one highly.

Corvettejohn86Reviewed in the United States on July 21, 2022
4.0 out of 5 stars
This was a decent movie
Verified purchase
This was a decent movie. I gave it 4 stars. It was has a good case, plenty of action, a few twists and a good story line. I gave it 4 stars because of the style in which the movie was made. It reminded me of, "Blow" it kept bouncing around. I don't really care for this style of movie making. It doesn't stop me from watching them though! I just prefer a more in depth drama/action movie. I think what I'm saying is, They do all the filming and then edit it to include all the action scenes to keep the movie under 2 hrs. And you entertained. But, Then it takes away all the drama and you get a quick story....
2 people found this helpful

MikeReviewed in the United States on July 5, 2021
1.0 out of 5 stars
Audio off on Amazon Prime - Unwatchable
Verified purchase
This review is more of a reflection of Amazon Prime than the movie, as the movie is awesome. This was unwatchable on Amazon Prime as the audio was off by 2 seconds from the video. We tried everything to fix and finally just rented via Vudu. No link anywhere on Amazon to request a refund due to this problem. Won't rent anything on Amazon Prime anymore, will use other services.
6 people found this helpful

Shenandoah browningReviewed in the United States on April 17, 2021
4.0 out of 5 stars
Tom cruise kentucky style !!
Verified purchase
I like Tom Cruise .. I don't care anything about the scientology, that's his right to believe what I personally think is a writer who's ego took fire and a lot of people danced in the flames..yeah ..I know that doesn't make sense...that's kind of my point ..I like Tom Cruise because he generally knows what a good script is ( most of the time.. the nummy and that last Jack reacher was definitely a baaad decision ).. Tom Cruise is without a doubt the greatest ( as far as being relevant ) of all time.. 40 years and very few "bombs" .. he has only gotten better with the mission impossibles and I say "he " because believe me ..he is in control.. I would say he is the Bruce Springsteen but, movies instead of music.. why do I compare the two ?.. both are in fantastic shape not only for their age but, they're just in fantastic shape and yes having money helps but, it's the discipline that it takes and money can actually make it harder.. anyway I guess I'm getting off topic... Tom Cruise is not my favorite actor .. I can't give one particular person.. Daniel Day Lewis, Christian Bale, Sean Penn, Gene Hackman , etc.. but , as far as a "Movie Star " it is hands down Tom Cruise .. I think he was more respected for his acting only for a short time

'Rain Man ' 'Born on The 4th of July ' ' The Firm ' and then he just became to big of a star and hasn't came close to an Academy Award ( or was he nominated for his terrific performance in 'Tropocal Thunder ' ?... Playing a very unlike Tom Cruise role which brings me around to his performance in ' American Made ' which he plays kind of an anti hero and he plays it with some of that same humor as ' Tropic Thunder '.. he is very good in this part .. he is a good actor .. he makes me forget about it being that same lunatic who jumped up and down confessing his love for Katie Holmes on Oprah's couch .. and besides Tom Cruise's very likable "Drug Trafficking pilot " the supporting cast his great.. Also has a great dtsX soundtrack as well as great music from 70's and 80's .. this movie was very entertaining and not a normal " Tom Cruise " which is why it probably did one tenth of the box office of his last ' Mission Impossible '.. This met and exceeded my expectations I Mainly bought it to add some more dtsX titles to My collection ( 80% 5.1 or Atmos 19% dtsX and sadly 1% ,if that of auro-3d which is in my opinion the best codec ).. I know, what a long winded review but, I really was trying to make some valid points.. first is take away your thoughts on what Tom Cruise believes..That has nothing to do with his movies.. you don't remain relevant for decades if you don't have the talent and charisma.
And yes at almost 60 Tom Cruise still does most of his stunts.. but, time is all our hunters
T knows that and he's looks like he's going to lighten up and hopefully do more roles like this one I'm the future.. or even another Mission.. they just keep getting better
. A strong 4 out of 5!! ... PS please make
more Auro-3d movies ..the USA is not keeping up.. it is hands down the best possible sound !

Amazon CustomerReviewed in the United States on April 24, 2019
3.0 out of 5 stars
It's OK
Verified purchase
This is a movie loosely based on the life of Barry Seal. There are a number of things that are quite a bit different than the historical version of his life. However, it is still an interesting movie that sort of captures one aspect of 1980s culture. The movie tells the story of how a talented TWA pilot was recruited by the CIA to do covert aerial surveillance in Central America at the end of the 1970s. Eventually, it turns into all sorts of opportunities, including illicit drug transportation for Colombian cartels. Tom Cruise does a decent job with the role. It probably isn't one of his best performances, but it is good. There are a couple of other mildly interesting characters, but he is pretty much the focal point of the movie. The movie is kind of a fun headlong dash into instant money with an equally abrupt downfall. I felt like the movie was entertaining and watchable, but it was not highly-memorable. It seemed like a story that has been told before about events that have kind of been forgotten. There is nothing especially artistic or thought-inspiring about the movie other than maybe a mild commentary on the silliness of US operations in Latin America in the 1980s. I can recommend the movie, but I would say it is definitely not a classic.
5 people found this helpful

#WearetheSmithsReviewed in the United States on January 29, 2018
5.0 out of 5 stars
Who would have known
Verified purchase
Not only did Tom Cruise do a great job with this character, but it even taught me a thing or two about this great country's past I wasn't aware of. If you like his style of film, this movie hits all of the typical troupes of the genres. Plus, you'll learn more about a time in history that has been talked about from there other side of things. Don't know what I mean? Think Oliver North, but without getting into the political mess. This is a great movie.
15 people found this helpful
See all reviews
Back to top
Get to Know Us
Make Money with Us
Amazon Payment Products
Let Us Help You
EnglishChoose a language for shopping. United StatesChoose a country/region for shopping.
© 1996-2022, Amazon.com, Inc. or its affiliates