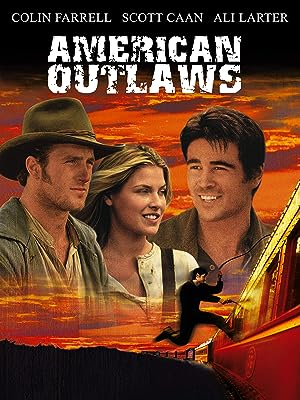 (1,493)
5.91 h 34 min2001X-RayPG-13
When a Midwest town learns that a corrupt railroad baron has captured the deeds to their homesteads, a group of young ranchers join forces to take back what is rightfully theirs.

Jesse and Frank James and their gang of friends and ex-civil war fighters come home to face Yankee occupation and the Union Pacific railroad trying to buy up their farms for pennies on the dollar. On their front porch Jesse, Frank and their mom being pressured by the railroad when "Mom" says she wants to pray about it. She bows her head and silently offers up a prayer, begins nodding her head and says "The Lord says, we can bury them out back, noone will know." effectively ending the railroads offer that day. There is also a sweet love story between Jesse and the fiesty, intelligent and pretty Zerelda, (Zee). Plenty of creative 'shoot em up' scenes, spiced with humor. tension, love, loss, challenge and victories. Very nice ride.

GBSBReviewed in the United States on December 14, 2014
5.0 out of 5 stars
Haters Gonna Hate - Nobody ever said it was a history lesson!
Verified purchase
You can't condemn the movie for lack of historical accuracy unless the director said it would be historically accurate, which he didn't. The writers of this film did exactly what all of ye olde dime-store-novel authors did; made up their own heavily romanticized stories about real-life people. Absolutely nothing wrong with that.

If you can understand that, and take the musket barrel out of your behind, you will probably really enjoy this movie. It's exciting, funny, sexy (Collin Farrell & Ali Larter provide abundant eye-candy for both genders), and just the right amount of cheesy. It has been one of my favorites since the first time I saw it, when I was like 12, and still is 10 years later at 22.

Also, as a student of film, I must more specifically commend the awesome cinematography, excellent production design, on-par acting, great stunt work, and the seriously rad use of modern Southern Rock music.

Just an overall good movie. I think I shall buy it on Blu-ray as soon as I finish writing this sentence.

little white glovesReviewed in the United States on April 11, 2015
5.0 out of 5 stars
A less than great movie that's great fun!
Verified purchase
Hollywood regales us with yet another telling of the saga of those vicious, murdering, thugs who became America's greatest demi-gods. the James-Younger gang. And , Yikes!, did the critics and western purists hate it. "An inaccurate depiction of the real west" they wept and wailed. Well, thank God for that. The real west was a place of unrelieved and unrewarding hard work. Grim, filthy, and just plain disgusting. We fans of westerns want the myth of the romantic old west and director Les Mayfield gives us that. He glosses over the unsavory reality of the gang and portrays our guys as high-spirited rapscallions. Boys just wanna have fun ya know. Colin Farrell joins the ranks of impossibly handsome leading men(Tyronne Power and Brad Pitt were two others) to play the less than pretty Jesse(The real Jesse was weasel-faced). Farrell is too contemporary to be convincingly "Wild West"(As is all of the cast and the movie itself) but he is always exciting to watch. You
can't take your eyes off him and he has all the charisma the real Jesse must have had to make men follow him unto their deaths. The entire
cast is good, especially the supporting actors, some of the best character actors around today. And Mayfield understood something that few directors of westerns ever understood, that women like westerns as much as men. He gives the distaff side of the audience a heroine to be
proud of: fresh-faced Ali Larter as Jesse's spunky wife, Zee. No whiny pacifist schoolmarm in a starched corset. She can hold her own with any of the men and she engineers Jesse's escape from the prison train(One of the most exciting scenes ever in a western). "American
Outlaws" IS full of inaccuracies. And it has so many mistakes you could make a parlor game out of them. It's not even a very good movie. But it is non-stop action and good humor. Fun every bit of the way. Deservedly becoming something of a cult favorite.

Video quality of my copy is OK and the sound is dim, I had to turn it way up. On the other hand I paid only $6.00 for it. As my daddy used to say, "You can't hardly beat it with a stick".
2 people found this helpful

PoppyReviewed in the United States on January 29, 2018
5.0 out of 5 stars
Strap in as this is like a runaway freight train of action and Adventure never stops
Verified purchase
One of the most outstanding and arousing films that I've seen in some time.
This young cast played off well each other, Colin Farrell, Scott Caan,
Ali Larter and the supporting cast were just great. I've seen many versions
of the Jesse James gang but none that I continued cheering throughout.
These young people kept me glued to the screen and wondering what was
going to happen next. Now there was one character who totally surprised
me, like a sleeper and that was Ali Larter. I give her an that-a-girl.
4 people found this helpful

TylerReviewed in the United States on October 4, 2010
5.0 out of 5 stars
A good Western comedy!
Verified purchase
I watched this movie and laughed a lot through it, along with some one-word responses like "WHOAAAAA!" The Civil War battle in the beginning had a nice touch, even though the forces in it seemed small--one regiment of Confederate cavalry versus maybe two regiments of Federal troops and a battery of artillery, perhaps. And I find the situation AWKWARD when the cavalry are about to pursue the retreating Yankee forces and run straight into a long line of haggard Confederate troops. The dialogue goes like this:

COLE: What are you fellas doing? There's more Yankees back there!

That scene put kind of a twist on things, which incites the James and Cole brothers to go home back to Missouri, where they find a new threat hanging over their lives--railroad detectives trying to force farmers off their land and raising hell for anyone who refuses their offer of $2 an acre. Jesse James soon decides to declare a personal war on the railroad, hurting them most by simply robbing them of their financial assets.
Other critics harangue this film for it's "lack of historical accuracy." Well, if you want to see historical accuracy, go and watch the movie, "The Life of Jesse James." This movie never said "Based on a True Story" but simply revolves around the first daytime bank robberies in U.S. history, whether or not the scenes are true. 50 percent of the things in this movie may have never happened, but it still makes for a good movie. My favorite scene is when some of the gang members are guarding the bank from the outside, and trying to protect themselves from the cane of a bitter, indignant old man who wants to go to the bank.
OLD MAN: There ain't no gol-durned bank holiday!

INDIAN SCOUT: Sir, you're right about that.

INDIAN SCOUT: On account on that we're uh...robbing it.

OLD MAN: Oh! Well, why didn't you just say so in the first place?

This movie was quite exciting and has a hundred other scenes as funny as this one.
3 people found this helpful

BookwormReviewed in the United States on July 14, 2002
5.0 out of 5 stars
A Fun Movie with a great Cast!!!
Verified purchase
Yes, I have heard that "American Outlaws" isn't always historically accurate! But you know what? Who cares? It's a terrific movie, that takes you on a wild and hilarious ride with Jesse James and his gang. All the actors are well-cast and did a great job portraying their characters, although - in my mind - Colin Farrell (the next big thing!) and Ali Larter (Hollywood's most underrated actress) do stand out among the others! If you are looking for a history lesson - go to the library. But if you are looking for a fun movie with lots of action, a great cast, good script, a bit of romance, and some truly unforgettable moments, then don't miss out on "American Outlaws"!!! It's become one of my all-time favorite movies! Plus, the DVD has really great bonus features ... trailers, tv spots, photo galleries, DVD Rom features, and 4 great featurettes - check out "How to be an Outlaw" for some nice shots of the guys in cowboy camp ... showing off their muscles during what would later be know as the hottest summer in Texas' history :o)
26 people found this helpful

Amazon CustomerReviewed in the United States on May 20, 2020
5.0 out of 5 stars
Awesome movie!
Verified purchase
Idk why this movie got bad reviews on Rotten Tomatoes. It's not a documentary, the creators definitely took some creative license but I really liked it! Great action scenes, awesome casting, and Timothy Dalton is PERFECT in this. Great bad guy, and gotta love that accent
One person found this helpful

DEPLORABLE MIKEReviewed in the United States on April 26, 2020
1.0 out of 5 stars
Slow then slower
Verified purchase
had a hard time lasting til the end of this 100th remake of Jessie James and Cole Younger. The preety boy and girl actors are completely out of touch as Western Outlaws. Just semi well known actors wasting two hours of screen time.
2 people found this helpful
See all reviews
Back to top
Get to Know Us
Make Money with Us
Amazon Payment Products
Let Us Help You
EnglishChoose a language for shopping. United StatesChoose a country/region for shopping.
© 1996-2022, Amazon.com, Inc. or its affiliates