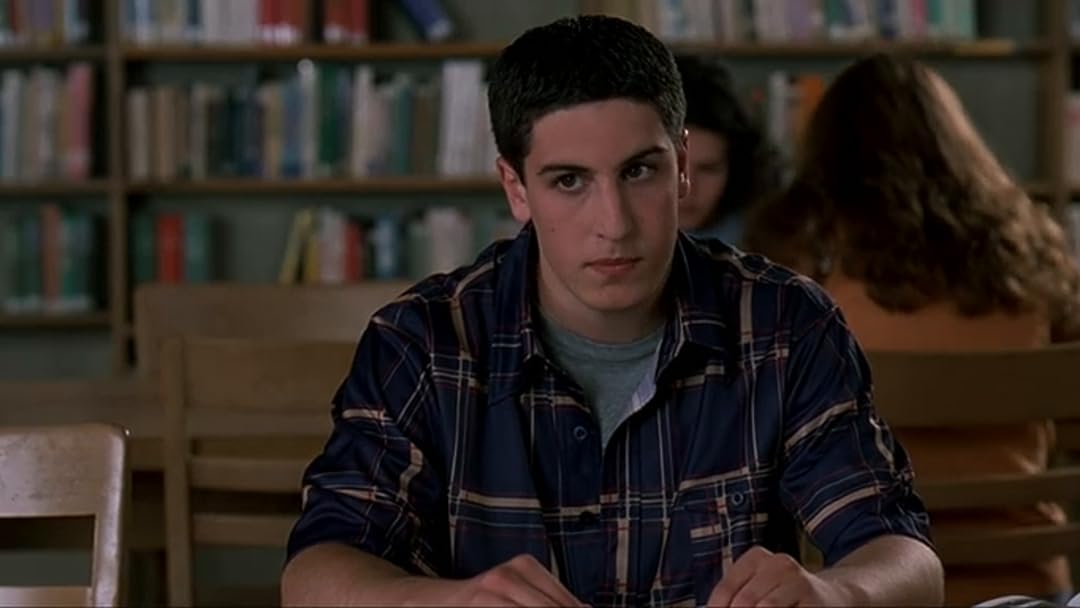 (4,190)
7.01 h 35 min1999X-Ray18+
The original gross-out comedy classic! Join Stifler, Jim and the rest of the gang as they attempt to lose their virginity before graduating from high school.

The Sleepless KnightReviewed in the United States on April 12, 2019
5.0 out of 5 stars
This movie never grows old!!!!!
Verified purchase
This movie was made in 1999 and I've probably seen it a dozen times over the years. It NEVER gets boring. Its ALWAYS funny. I always laugh out loud in the parts I've always laughed out loud in. There are so many funny parts to this movie but my favorite is probably Alison Hanigan (band chic) yelling at Jason Biggs (Jim) right before they.......well, watch it and find out!!!
6 people found this helpful

Luke DurkinReviewed in the United States on January 8, 2022
5.0 out of 5 stars
At this point it's an interesting historical piece
Verified purchase
As someone born in 1990 I was familiar with a lot of elements and scenes from the movie but had never seen it. Watching for the first time in 2021, it's not just funny and entertaining, but it's really a historically important movie as it really defined perceptions of sex, virginity, high school and so on for a generation. With movies like Fast Times at Ridgemont High included in the National Film Registry at the Library of Congress, I would hope this movie is also considered for its significant impact on the culture.

MikeReviewed in the United States on September 26, 2021
1.0 out of 5 stars
I'm unsure if it is me or the movie that hasn't aged well.
Verified purchase
I shudder to think how dumb I was as a youth that I remembered this as being funny. Everything is cringe-worthy. The movie (or myself as a youth) is terrible, insipid and not worth the time. It is heart breaking to see such (at the time) promising actors as Flaherty delivery such terrible lines with such a terrible character. I'm glad she was given the chance to so much better work later (and by later I don't mean American Pie 2).
Wow. This movie or my youth was a disaster. Perhaps both.

Abraham the vampire apprenticeReviewed in the United States on June 6, 2022
5.0 out of 5 stars
Makes me wish I could go back in time!
Verified purchase
What the heck happened with our world folks. I remember watching this in middle and high school. Very fond memories growing up! Not gonna lie I would rather stay alive permanently in the 90s and early 2000s then be in 2022. I don't know if the internet screwed up everything or it was the woke culture, sjws or the hate and toxic bull the media spreads!

Alan PerrymanReviewed in the United States on June 17, 2019
5.0 out of 5 stars
A true American teen classic.
Verified purchase
I probably watched this movie 100 times when I was a teenager. I hadn't watched it again for years until I learned that my girlfriend has never seen it. Since I dont have a VHS player any longer, ikr, I just streamed it from Amazon. My girlfriend and I had lots of laughs watching this old 90's classic together in 2019.
3 people found this helpful

D. MokReviewed in the United States on December 30, 1999
4.0 out of 5 stars
Funny and curiously emotional.
Verified purchase
A sex comedy with a heart? Say goodbye to pure harmless raunch -- American Pie, despite its gleefully gross sense of humour and obsession with all that is libidinous, actually also hides a real sensitivity behind all the naughty jokes and embarrassing situations.
Much like Fast Times at Ridgemont High but to an even greater extent, American Pie makes you laugh by daring to put its characters in the most ear-reddening of situations. Jason Biggs deserves a hand for diving into those situations with pizazz while also keeping the character likeable, somebody you can relate to. Porky's certainly didn't have that. An instantly appealing cast (Chris Klein, Tara Reid, Mena Suvari, Eugene Levy) with a couple of great comic gems in their midst (the pitch-perfect Natasha Lyonne, Eddie Kaye Thomas, Shannon Elizabeth, Alyson Hanigan) keep things interesting throughout, and the script -- despite its three-week-old-apple-pie premise -- manages to achieve a freshness and wacky sense of humour.
Some characters are underdeveloped -- especially choirgirl Heather (Suvari), Stifler (Seann William Scott) and Nadia (Elizabeth) -- but with so much going on all the time, and such an appealing cast of characters across the board, that can be forgiven.
American Pie manages to evoke pathos along with laughter, and therein lies its greatest strength. When Vicky (Reid) says, "I realized nothing's perfect", the filmmakers sympathize with her. As it does with all the other high schoolers in the movie.
View it with an eye on the people behind the caricatures and you'll be rewarded beyond the movie's dirtier jokes.

Eric WReviewed in the United States on April 25, 2000
5.0 out of 5 stars
I laughed til I hurt
Verified purchase
I pre-ordered the unrated version of this movie because I have not laughed as hard as I did at this movie very often and I wanted to see what they had to cut out. I was let down as far as extra scenes (no, there's no more Nadia than in the original), there's not much more and I personally don't think they should have cut the extra scenes anyhow.
What's great about having this on DVD is that you can just sit down and watch a couple of the best scenes. I mean, this is not a movie that will loose a lot if you don't watch it all the way through. It'll be great for parties and whenever you want to laugh your head off. You need to be a teenager at heart, because the comedy is squarely aimed at the coming of age group, but the beauty of this movie is that people like me that have moved on can still relate.
Run out and get this if in your face, juvenile comedy amusues you as much as it does me.

5 people found this helpful
See all reviews
Back to top
Get to Know Us
Make Money with Us
Amazon Payment Products
Let Us Help You
EnglishChoose a language for shopping. United StatesChoose a country/region for shopping.
© 1996-2022, Amazon.com, Inc. or its affiliates