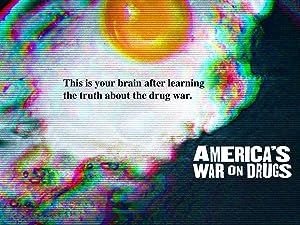 Season 1
(8)
2017TV-14
America's War on Drugs is an immersive trip through the last five decades of American drug policy and the unintended consequences of a global power-grab of the narcotics black market.

Positive Vibes ManReviewed in the United States on July 17, 2019
5.0 out of 5 stars
A glimpse into the dirtiest organization on the planet.
What an amazing journey through the history of the drug trafficking of the CIA. At first, I wondered why they allowed this documentary to be made, then I realized, they wanted to be in control of the narrative. "Obsessed with keeping America safe" is exact wording from the series description of the series. The CIA doesn't actually care about "America" in the sense that we think, they care about covert power and leverage. Look up Operation Paperclip, Operation Northwoods, Tuskeegee Experiments, and the wikipedia page on Human Experimentation by the US government. Look up the nazi Wernher von Braun. You have the ability to see beyond the mainstream narrative of US history now with the internet, do some research, weigh the facts, come to your own conclusions. The same companies that profit from war own the media channels, they have no vested interest in reporting the truth. It's up to you to find it yourself. There are some good nuggets in this docu-series. Definitely worth the watch.
8 people found this helpful

"America's War on Drugs" relates in graphic detail the history of the greatest con job pulled on the American people (and later, on the world) by corrupt government officials: the (so-called) War on (Some) Drugs. From its humble start in the 1950s, when the CIA created much of the demand/supply of LSD and opiates as part of its failed drug experiments, to the Nixon-Reagan-Bush anti-drug hysteria that doused much fuel on the flames, to the Iran Contra scandal that saw the DEA in direct conflict with the CIA's drug smuggling, to America's support of the Taliban who flooded the world with cheap heroin, down to the present-day drug cartel turf wars and massive toll in human lives, the story of Amerca's misguided War on Drugs and mockery of the rule of law is told by the movie in gripping, journalistic fashion.

The lesson is clear: disastrous unintended consequences can result from the best of intentions if plans are not thought out carefully, with full consideration of the country as a whole. By being overly focused on eradicating certain pests, you could burn your own house or country to the ground as you wage war against these "enemies of the people" - especially when these enemies happen to be your own people!

Unfortunately, America has a long history of short-sighted, fragmentary thinking, with "war" being almost universally adopted as a quick and lazy solution to complex problems, as the "wars" on drugs, poverty, hunger, crime, terrorism, Covid-19, etc. etc. have shown. But as this film notes: "There's a principle at work here... one thing that really makes a state grow and thrive is having a war".

The trouble is, the drug war cannot be won. For every top drug lord taken down by the DEA, a hundred people are willing to take his place. For (again from the film) "unequivocally, rewards always outweigh the risks in drug trafficking".

jgibsosmanReviewed in the United States on November 8, 2021
4.0 out of 5 stars
Good, if dated and somewhat predictable history of the drug war
At one point the narrator speaks of LSD saying "...euphoric bliss or deadly panic." I doubt the scriptwriter knows anything about LS to say that it causes euphoric bliss. I agree it can cause panic, although not necessarily deadly. But euphoric bliss is a term that should be reserved for opiates. Although people had good trips, euphoric bliss is probably not the way to describe them. Even good trips were immensely challenging. Bad trips could cause panic, but that panic is not comparable to the panic that be caused by, for exmple, benzodiazepine withdrawal, alcohol withdrawal, or overuse of methamphetamine. I suppose it is just as well that people today are mostly so ignorant of what LSD does that statements such as this "euphoric bliss" one can be gotten away with. Is it euphoric bliss to watch a tiny spider climbing down a tree trunk, or to see the people you know as almost glowing, as ify you had never seen them before? LSD is called "psychedelic" for a reason, and that reason is not euphoric bliss. It is more like what people call "wokeness" these days. Was Arjuna full of bliss when Krishna showed him some reality? No, he was terrified. Most drugs in use today dampen consciousness, they do not enhance it to the point of any state that could really be called bliss. Mostly I like this series and am watching the episodes now for the third time. It might have been better to have some more well-known experts speaking, instead of so and so who was in the CIA and so and so who is a professor at a university- there is a bit of low rent about this series, and a bit of sensationalism. Many Americans would like to believe the government is evil and totally selfish. The real story of the origins of drugs in the USA is surely more complex. I wish someone, one of these days, would make documentaries for adults. Everything seems aimed at the teenage mind, and the Web and also amazon have been deteriorating. Surely this has to do with that root of all evil, as money becomes more unstable and the gap between rich and poor greater.

Igor PeReviewed in the United States on May 1, 2021
5.0 out of 5 stars
I Can't Recommend This Enough
An excellent look of the hypocrisy of the war on drugs - waged by the US. I'm telling everyone I know to watch this.

If I had to make a criticism, it's that it's missing the meth & fentanyl coming through from Mexico (and China for fentanyl) - but maybe that's because it's such a recent development.

Gunny DReviewed in the United States on March 23, 2021
5.0 out of 5 stars
Great Series
Well documented war on drug series with information that was new to me. Worth watching if you have an interest in this topic.

Amazon CustomerReviewed in the United States on June 21, 2019
5.0 out of 5 stars
WOW
Factual
2 people found this helpful

LNRReviewed in the United States on April 27, 2020
5.0 out of 5 stars
Must See
Finally! well done!
See all reviews
Back to top
Get to Know Us
Make Money with Us
Amazon Payment Products
Let Us Help You
EnglishChoose a language for shopping. United StatesChoose a country/region for shopping.
© 1996-2021, Amazon.com, Inc. or its affiliates