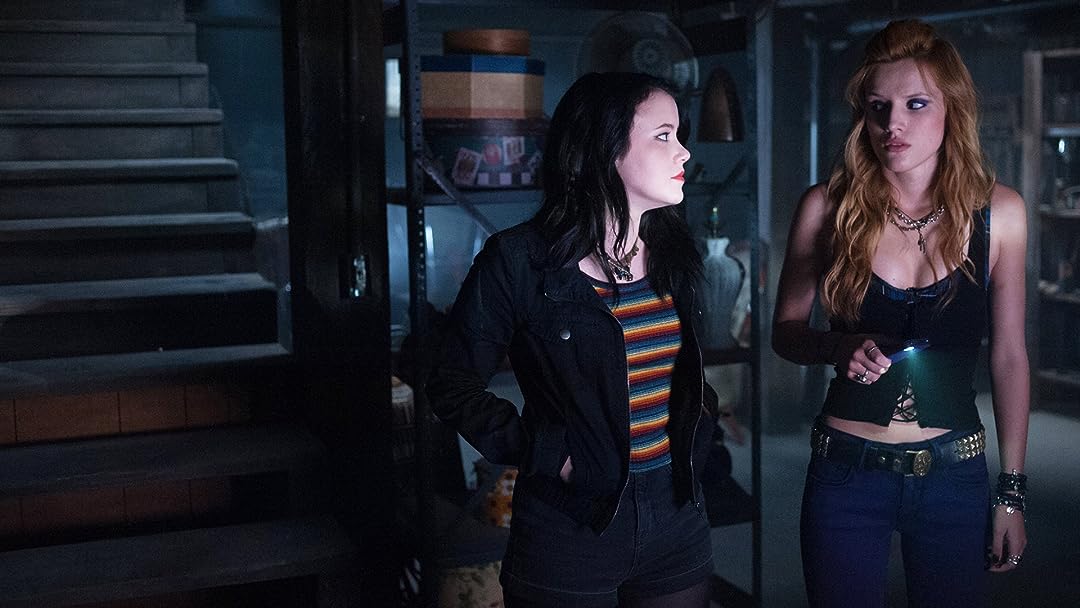 HEFReviewed in the United States on December 6, 2017
3.0 out of 5 stars
3.5 stars. If we have to compare - not as bad as the remake.
Verified purchase
Of course, I scanned the reviews before writing this... the one that stood out stated that this was much worse than the remake, and the worst in the series. Did you see Amityville 3D or the multitude of straight-to-vid releases? I love Ryan Reynolds as a comedic actor, but man, the remake was bad too. The Awakening is a decent horror film. There are a couple of good jump scenes, and there is some nice mystery around the mostly-bed-bound sibling. The casting is also very good - a great blend of old and new - love seeing JJL in this role. I think the weakest point is when they start discussing the initial Amityville film. I think referencing the fictional history of the house without breaking the 4th wall would have been the right route. If you are a horror fan, I believe you will think this is worth a watch.
16 people found this helpful

JeffReviewed in the United States on December 19, 2017
4.0 out of 5 stars
Solid Entry In The Horror Genre.
Verified purchase
Amityville: The Awakening is a solid entry in the horror genre. It is by no means a traditional "B Flick". The movie has a good cast for the core characters and several other well known actors and actresses flesh out the movie in smaller roles. I give the acting in the movie a solid B+. I was a bit disappointed in how Bel's young male high school friend was written; the character was an obvious caricature and served no real point in the film besides introducing Bel to the history surrounding the titular house and generally being semi-annoying. The actor playing the young man did a fine job, he just didn't have decent material to work with. Bella Thorne did a great job in the movie. I hadn't seen her in any other films, and only vaguely know her as some former Disney star. She did a pretty good job, though the chemistry with Jennifer Jason Leigh as the mother could have used some improvement.

Production values are good and consistent with theatrical releases for this type of film. There was no nudity, and very little swearing. The movie was not scary, per se, but did have a decent plot as well as several scenes that might startle a viewer or make them jump in their seat. The movie isn't the type to win any awards for originality or superior acting/special effects but it is a decent film to watch, especially at the current Amazon Prime streaming price point.

On a side note I would like to know why the movie, made in 2014, wasn't released until now. Studio's generally only hold back movies if they consider them really bad and/or there is some type of contractual dispute with some person or entity. The movie deserved better treatment, and definitely had some appeal in terms of some potential sequels.

SerumReviewed in the United States on March 27, 2019
2.0 out of 5 stars
Not the worst Amityville movie I've ever seen, but far from the best
Verified purchase
This is the first REAL Amityville movie since 2005's remake of the original 1979 "The Amityville Horror," coming after a slew of "Amityvlle-in-name-only" direct to video low-budget sequels. This movie was originally supposed to come out in 2014, but I guess due to some issues it wasn't released until much, much later. It's sort of a meta-sequel to the Amityville series in that the original movies are presented as movies in this movie. Does that make any sense?

The story is of a single mother moving her two daughters and comatose son into the infamous 112 Ocean Avenue and of course, weird ghostly things begin to happen soon after. To be perfectly honest, this movie failed to capture my attention for most of its run time because of its loosey-goosey plot and poor acting. The comatose son begins to show signs of coming out of his terminal coma due to the paranormal activity in the house and soon after he grows murderous, similar to the way Butch DeFeo wanted to murder his whole family. I don't want to give too much away because I know some people will enjoy this movie much more than I did so i'll leave it at that. The story is pretty poorly written, though, I will say that.

I appreciated the fact that they built a replica of the Amityville Horror house based on the way it looked in the old movies, that was a nice touch, but the characters are all so unlikable except for the Amityville-fanatic kid who comes over to the actual house in one scene and shows two girls the Amityville movies-- another nice touch I liked, which made me wonder if anyone who's lived in that house has ever watched the Amityville movies while living in the actual house or if they've ever been flipping through the channels and come across the movies on AMC and freaked out a little and said "Ahh! That's my freakin' house!" But aside from nice flourishes like that, the movie is kind of empty and sad and it makes me see why it took so long to come out-- there's just not much to it.

Thankfully this movie plays down the DeFeo murders as just a footnote, so it doesn't really trample on the graves of the DeFeo family the way some other Amityville movies do. But it still isn't a very good movie. Like I said the characters aren't very likable and they're kind of unrelatable and hollow, particularly the lead girl, who's a goth or something in an age where being goth isn't really a thing anymore. The Mom, played by Jennifer Jason Leigh is okay but she spends most of the movie overacting, which isn't really her fault but more of a directorial thing. The movie is as poorly directed as it is written and offers little. It honestly comes off as Amityville fan-fiction more than anything. Like, it seems like the kind of thing a 16 year old girl would write.

So aside from a few nice touches probably done in reshoots for the movie, this movie brings very little to the table. It's barely an Amityville movie and the only thing really connecting it to the Amityville series is the fact that they keep talking about the fact that they're living in the Amityville Horror house. I don't even know if I can honestly say this one's worth checking out.

Mad CollectorReviewed in the United States on December 29, 2017
4.0 out of 5 stars
Get WOKE During Amityville: The Awakening
Verified purchase
This is a valiant effort in the Amityville franchise. Granted, the myriad sequels and reboots of this story have diluted its intensity, but this one had me jumping from the start. As it progresses, it gets a little less impressive and, what starts out well, gets diluted itself toward the end. However, there are strong performances by Bella Thorne and Jennifer Jason Leigh. In one scene, the movie's characters even discuss the films based on the Amityville haunting in a fun/"meta" way which smacks of the Scream franchise. Overall, I found this one entertaining and it held my interest.
7 people found this helpful

AdamReviewed in the United States on September 21, 2021
4.0 out of 5 stars
Decent
Verified purchase
While this may not be the best Amityville movie in the franchise, it's still worth checking out and it's honestly better then the remake. It's actually one of those Amityville movies that I'll personally watch and I honestly didn't mind the story at all, despite a pretty stupid twist that comes around the third act of the film.

One of the reasons to check out the movie is the song that plays at the end and it's really worth listening to. Anyone who watches Amityville: The Awakening will be looking up the song "True love" by Rob Chloe and it's a really good song.

Nicholas D. LahaReviewed in the United States on January 21, 2018
5.0 out of 5 stars
Fun scary enough
Verified purchase
Without seeing any of the other Amityville movies, this one gets 5 stars simply because it is a sequel and not a remake, The awakening is a sequel in the original movie series. It also reframes from taking the movie into a different direction and stays on track to the original story. Fun scary enough, suspenseful, and makes you think and guess. The Amityville horror series is back with a sequel to fit modern times in 2017. Anyone who has or hasn't seen the original films will get a taste of the horror franchise that is Amityville
One person found this helpful

Dark Stylish's ReviewsReviewed in the United States on February 27, 2020
5.0 out of 5 stars
Jennifer Jason Leigh made this movie good!
Verified purchase
Movie has an interesting and understanding feel, you could see why the mother did what she did but she also obviously lost her grip on reality! What made this movie was Jennifer Jason Leigh playing this movie with serious tension like in Dolores Claiborne. She is an actress that you can feel all she dishes out. Especially with the house in Amityville and her playing a part to add to the horror series what a brilliant cast job! Even if a movie is bad she makes the movie good with every role she plays. Brilliant actress and a good movie to add to your Amityville collection!

ThatKelleChickReviewed in the United States on November 24, 2019
1.0 out of 5 stars
Don’t waste your time dude
Verified purchase
This movie was actually really awful... I had such high hopes for it with the cast and of course with it being Amityville. I was so so so let down though. The acting is subpar, the plot feels thrown together, it’s not frightening whatsoever, and overall it’s an hour and 27 minutes of my life I wish I could get back. For a movie called “The Awakening” it sure was a snoozer.
See all reviews
Back to top
Get to Know Us
Make Money with Us
Amazon Payment Products
Let Us Help You
EnglishChoose a language for shopping. United StatesChoose a country/region for shopping.
© 1996-2021, Amazon.com, Inc. or its affiliates