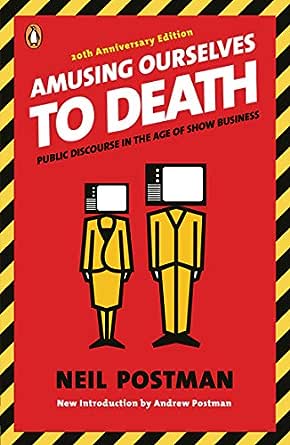 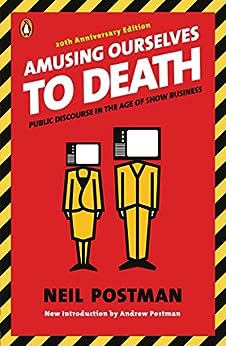 Amusing Ourselves to Death: Public Discourse in the Age of Show Business Kindle Edition

“All I can say about Neil Postman’s brilliant Amusing Ourselves to Death is: Guilty As Charged.” –Matt Groening, Creator of The Simpsons

“As a fervent evangelist of the age of Hollywood, I publicly opposed Neil Postman’s dark picture of our media-saturated future. But time has proved Postman right. He accurately foresaw that the young would inherit a frantically all-consuming media culture of glitz, gossip, and greed.” –Camille Paglia

“A brilliant, powerful, and important book. This is an indictment that Postman has laid down and, so far as I can see, an irrefutable one.” –Jonathan Yardley, The Washington Post Book World --This text refers to an alternate kindle_edition edition.

Neil Postman (1931-2003) was chairman of the Department of Communication Arts at New York University and founder of its Media Ecology program. He wrote more than twenty books. His son Andrew Postman is the author of five books, and his work appears in numerous publications.

Jeff Riggenbach has narrated numerous titles for Blackstone Audio and won an AudioFile Earphones Award. An author, contributing editor, and producer, he has worked in radio in San Francisco for the last thirty years, earning a Golden Mike Award for journalistic excellence.

This McCluhanesque diatribe begins by observing that our present and future resemble the predictions in Brave New World more than those of 1984. Technology, in particular television, has shaped our politics, news, religion, education, every aspect of our world. Rigginbach's reading is a little too fast-paced for this material; furthermore, the material is not suited to an audio format. Why did the author allow his thought to be corrupted by allowing their promulgation through non-print media. In addition, the examples he cites are ten years old; this week's television better supports his conclusions. The message is valid, but the medium through which it's presented is flawed. S.F.W. (c)AudioFile, Portland, Maine --This text refers to an alternate kindle_edition edition.
Read more

4.6 out of 5 stars
4.6 out of 5
1,333 global ratings
How are ratings calculated?
To calculate the overall star rating and percentage breakdown by star, we don’t use a simple average. Instead, our system considers things like how recent a review is and if the reviewer bought the item on Amazon. It also analyzes reviews to verify trustworthiness.

%%%%
5.0 out of 5 stars Relevant, Compelling, Well-Argued, Well-Written
Reviewed in the United States on August 25, 2015
Verified Purchase
"Amusing Ourselves to Death" is an amazingly written and well-argued book. As Postman notes: In the Victorian Era (mid-late 1800s), novelist Charles Dickens had as much fame as The Beatles in 1960, Michael Jackson in 1980, or Brad Pitt in 2014. The farm boy in the late 1700s carried a pamphlet of Thomas Paine's writings in his back pocket. Today, school-children carry iphones with pictures of Eminem (boy) or Taylor Swift (girl). In the mid-1800s, Abraham Lincoln and Stephan A. Douglas debated in public FOR HOURS on the dire issues of their time. Today, Barack Obama and Mitt Romney have bite-sized debates where one side speaks for 1 minute and the other side gets a 30-second rebuttal.
.
Clearly, the people then were different from the people now in terms of mainstream intelligence. The reason, Postman argues, is that the people in Dickens' era were children of "The Age of Typography," and the people today (us) are the children of "The Age of Show Business," or "The Age of Television." Reading was life to people in the older days; watching television is life to us now. And television, however entertaining, cannot be anything but sheer junk because it works through images, sensationalism, and emotional gratification. Writing, on the other hand, requires patience, detachment, memory, and reason. The result is that we are dumber than our ancestors. Incredulous? Pick up the book and let Postman prove it to you.
.
This book was written in 1985, but don't be fooled; it still wields enormous relevance today -- The chapter titled, "Peek-a-Boo-World" as well as the "Information-to-action-ratio" theory outlined in it are particularly pertinent regarding the modern-day use of the internet, especially with portable laptops, tablets, and cellphones. With those gadgets, we have become, in short, a nation buried in triviality, as Postman predicted. Furthermore, television viewership today has not decreased with the rise of the internet, iphones, and such. On the contrary, studies show that we still watch as much television as before, despite the alarmingly rising rate of electronic use. In this book, Postman focuses on politics, religion, education, and the news. These, he says, are serious topics that are downgraded to mere amusement because television, by design, works by making everything amusing. In effect, we come to expect everything in life to be entertaining when, in actuality, some things must be endured. Again, I urge you to read this book carefully. I've read it four times. It's ideas have allowed me to wean myself away from television and on to typography. Let it have the same effect on you.

R
5.0 out of 5 stars Appealing yet obvious
Reviewed in the United States on January 6, 2018
Verified Purchase
The title of this book is appealing, especially for the dissidents or mavericks who would be contended to find views in this book that rebel against the contemporary societal norms. The coverage this book got after 2016 US primaries has further fueled the interest of those who are looking for gratification to find arguments that confirm to their views of the contemporary world. Under the influence of a biased yearning to find a way out of the 2016 US political landscape, this book is a panacea; it categorically puts the blame for this presumed gaffe on the evolution of show business in the coeval society. If you are one of these readers, go ahead, read this book, find your momentary satisfaction. Once you do that, you may find yourself reverting back to television to find more views that confirm to your opinion. If that happens, you should realize that you are perhaps a victim of the very change that the author warned you against.
Beyond the momentarily fulfillment, this book is nothing more than a summary of concepts expressed better in books this very text refers to. This book no doubt deserves a high rating for the brevity of the message the author puts forward and the number of texts that the author references to further research on this topic. Otherwise, everything that this book talks about is obvious, especially to anyone who has objectively observed the ascent of media in our everyday life. This book at best presents quips and quotes to summarize the thoughts that hitherto might have simmered in a mind such as ‘How television staged the world becomes the model for how the world is to be staged,’ or ‘Television is our culture’s principle mode of knowing itself,’ but those that were not succinctly expressed. All that this book does is present an aha moment, something on the lines of ‘I knew it!’ Otherwise, any serious explorer of this topic should start with 1984 by George Orwell or Brave New World by Aldous Huxley instead of picking up this text.
Finally, this book builds its arguments on examples with a little reference to research. It presents opinions derived from observation; observation of elections, religion, advertisement, schools and news. While a large portion of population may actually be affected by these examples, this book fails to talk about the valuable side of mass media. At best it presents half the picture, the picture that’s dark. Not to say that it’s wrong, a reader should exert caution and exhibit judgement in jumping to conclusions.

1. The chief purpose of mass media news is not to inform, but to sell entertainment. It is actually "News Entertainment."

2. To their own benefit, the highest goal of the majority of "news" providers is to convince you to be a faithful member of their audience.

3. Mass media communicates in images and sound bites. Words, substance, and facts are neither conducive to their purpose nor desirable.

4. The bulk of what passes for "the news" is neither rooted in reality nor relevant to our daily lives.

5. Such "news" providers create their biased views of reality and attempt to convince their audience members to buy into it.

6. Many folks have long ago stopped thinking critically about what is presented as "truth in the media." Instead, they have latched on to a feel-good moral position that negates their personal responsibility to legitimately research history, context, facts, and moral/political/social principles.

Are we willing to do our own homework, or will we remain content to passively receive what is fed to us by commercial "news" providers? Are we naive enough to rely on "truth in the media"?

Paolo
5.0 out of 5 stars How the new medias are determining today's society and reality
Reviewed in the United Kingdom on December 30, 2014
Verified Purchase
This book is great in terms of the train of thoughts and reasoning that is able to trigger and it's very valuable in its long term and historical point of view on media and content diffusion in the modern age.
The book is massively interesting on 2 fronts

Even if the book was written before the entire internet revolution happened it's still very current and the trends and consequences identified by Postman are still in full force and effect in 2014.
Read more
4 people found this helpful
Report abuse

Mike S
4.0 out of 5 stars Alarming analysis of Things that have Actually Come.
Reviewed in the United Kingdom on January 11, 2019
Verified Purchase
An analysis that whilst written pre the age of the widespread social media that plagues discourse today is wholly relevant to the current absurdities of the 140+ character inanity and 'likes' of 'friends' we have never met, if indeed they actually exist. It would be good to have an equivalent analysis of the present day, but this is remarkablein that it says mych about has subsequently happened in the post TV and hard media world of the dumbing down of politics and social interactions.
Read more
One person found this helpful
Report abuse

Stuart Brown
5.0 out of 5 stars Mystic Meg stuff!
Reviewed in the United Kingdom on December 29, 2017
Verified Purchase
This is an excellent book. It may have originally been written in 1985, but if anything, is more relevant then ever before.

This should absolutely be required reading for everyone.

Andy H
4.0 out of 5 stars Still an interesting book
Reviewed in the United Kingdom on September 26, 2017
Verified Purchase
This book is not as dated as one could imagine and I would recommend reading the forward last or at least re-reading it once the book is finished. I would have liked to have seen a chapter on how religion has a similar 'diversionary' function. Well worth a read.
Read more
Report abuse