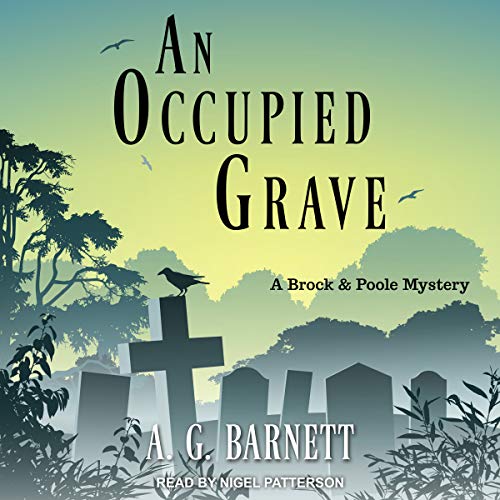 A village of secrets finds its past lies waiting.

When mourners gather in the village of Lower Gladdock, the grave is found to be already occupied. The victim is soon linked to a tragedy that tore the village apart five years ago and is handed over to the Bexford police to solve.

Detective Sergeant Guy Poole is hoping to put his traumatic past behind him and settle into his new station at Bexford. Now history is threatening to raise its head again, and he has a murder case to contend with.

Detective Inspector Sam Brock has a new recruit to take under his wing, and he's determined this one isn't going to die. As if that wasn't enough of a headache, his wife is coming home and may be on the verge of discovering the lie he's been telling her.

Newly paired duo Brock and Poole must track down the killer before more lives are lost.

Your audiobook is waiting!
Learn more about membership
List Price: $13.99
You Save: $2.04 (15%)
By completing your purchase, you agree to Audible’s Conditions Of Use
Sold and delivered by Audible, an Amazon company
Share

Arlene C.
4.0 out of 5 stars Entertaining
Reviewed in the United States 🇺🇸 on September 4, 2022
Verified Purchase
Quick read, very entertaining and thoroughly enjoyable. Very good and definitely recommended. Could not put it down and was sorry to see it end. Can't wait for the next one.
Read more
Helpful
Report abuse

Robin Periandri
5.0 out of 5 stars Great
Reviewed in the United States 🇺🇸 on September 9, 2022
Verified Purchase
An Occupied Grave really had my attention right from the beginning . I couldn't stop reading it. Thanks for the story.
Read more
Helpful
Report abuse

Lottie Capps
4.0 out of 5 stars Addictive , of course
Reviewed in the United States 🇺🇸 on August 15, 2022
Verified Purchase
Quite different from the usual ones I have read but really interesting. Quality police work I guess with just a bit of humor
Read more
Helpful
Report abuse

Gabbee
5.0 out of 5 stars Well done.
Reviewed in the United States 🇺🇸 on August 10, 2022
Verified Purchase
This is the second time I have read this book. Enjoyed it both times. I have had trouble finding books that I like so I am going back to books I liked in the past
Read more
Helpful
Report abuse

Hoover
5.0 out of 5 stars ReallY liked this book
Reviewed in the United States 🇺🇸 on July 13, 2022
Verified Purchase
Loved the introduction to the characters and their lives. Good plot line also. Will definitely try the next book in the series.
Read more
Helpful
Report abuse

Amazon Customer2
4.0 out of 5 stars Good clean story
Reviewed in the United States 🇺🇸 on March 26, 2022
Verified Purchase
I enjoyed the story development as Pool and Brock followed the leads as they unfolded. The small chemistry between Pool and Inspector Sanders was great. I recommend this story for the young adult reader.
Read more
Helpful
Report abuse

Roxanne E.W.
5.0 out of 5 stars An enjoyable read
Reviewed in the United States 🇺🇸 on May 26, 2022
Verified Purchase
I am a big fan of British crime drama, and I found this to be an enjoyable, easy read. The characters are easy to follow, and there are a few surprises as you work your way through. I will be reading more.
Read more
Helpful
Report abuse

endlessreader
4.0 out of 5 stars Great ending
Reviewed in the United States 🇺🇸 on February 4, 2022
Verified Purchase
Pleasantly surprised at how much I enjoyed reading about the characters of Poole and Brock. Both have great back stories that keep the reader engaged. Loved the ending and looking forward to the next one in the series.
Read more
Helpful
Report abuse
See all reviews

Shrimper19
3.0 out of 5 stars Good Plot, but....
Reviewed in the United Kingdom 🇬🇧 on April 28, 2018
Verified Purchase
Good plot, likeable and interesting characters, but a few glaring errors spoilt it for me. In the UK a coroner is not a forensic pathologist - they don't cut up bodies or determine cause of death; The coroner's jurisdiction is limited to determining who the deceased was and how, when and where they came by their death.

There are also too many aberant apostrophes (the Pagets randomly became the Paget's) and, while I have to put up with with people saying "was sat" and "was stood" in real life, it's poor English and shouldn't be used in writing. I also rather objected to "gotten" cropping up periodically.
Read more
109 people found this helpful
Report abuse

L M WILLIAMS
4.0 out of 5 stars A good story - some reservations
Reviewed in the United Kingdom 🇬🇧 on April 20, 2018
Verified Purchase
This is the first book I've read by this author. I liked the story and the characters. However, there were quite a few mistakes in the text so more attention could have been given to the proof reading - annoying to have to go back over the words to make sense of the wording. I would like to read more books written by this author and see how the various characters develop BUT I was taught to say (and write) "he was sitting on the edge of the bed" and not "he was sat on the edge of the bed". This way of using the present tense is used all the way through and is clumsy and downright irritating! It has certainly put me off buying the next book I'm afraid and that's a shame.
Read more
47 people found this helpful
Report abuse

Mr. Peter Franklin
4.0 out of 5 stars The good, the bad, the (not really) ugly.
Reviewed in the United Kingdom 🇬🇧 on November 25, 2019
Verified Purchase
This book, for me was a series of highs and lows. Okay, the lows first. Research into how the police work, how scenes of crimes are handled, how pathologists work and even how police vehicles are used is non-existent. Detective supervisors generally supervise detectives. There are senior (never superior) ranks. Individual detectives aren't given cars to use. They also don't have uniformed officers to do their menial tasks. Sergeants aren't referred to as "sir". I could go on forever. However, look at many telly series about British cops and they display a similar fictitious organisation, often penned by well respected authors. So, suspend belief and go forward.

The story itself reminded me of one of the telly shows mentioned above. It's like an episode from Midsomer Murders. It's all there. The village green, the cast of local characters, the vicar, the strange person living in the woods. I even pictured in my head the two main characters as looking like John Nettles and his sidekick. But, hey, if you like that sort of thing, then you'll like this, so it's not all bad by any means. The story itself is a suitably polished whodunnit and guessing the real culprit isn't easy. the sup-plots, the recently transferred DS and grumpy DI, the love interests and the errant father of the DS coming out of prison all help to pad things out suitably.

So, if you can look past the inaccuracies, what we are left with is a good, readable story. I nearly scratched two stars off for my overall rating, but on reflection, four stars seems about right. An enjoyable read.
Read more
21 people found this helpful
Report abuse

vertwil
3.0 out of 5 stars Needs a good Proof Reader
Reviewed in the United Kingdom 🇬🇧 on October 25, 2019
Verified Purchase
The story was compelling from the start, however several glaring errors made it hard work. A decent proof reader is required (I would consider sacking whomever is the current one). It was obvious that the author decided that too much had happened on the first day so split it into two days, but then forgot to change references to match, for example, the police referred to what happened that morning, when it was actually the day before. Another error was that Poole had already ordered a drink at the bar, but when a colleague arrived at the bar he indicated for them to order first, then ordered his again after. This did spoil the story considerably for me. The ending did feel a little rushed, as if time had run out for the book to be completed, and left so many questions unanswered too. I would like to read the next story to see if the writing style improves
Read more
20 people found this helpful
Report abuse

mairi smyth
5.0 out of 5 stars Excellent
Reviewed in the United Kingdom 🇬🇧 on May 1, 2018
Verified Purchase
Perhaps village greens and vicars went out with Agatha Christie , but it was good to see them back and working so well as background for this , excellent novel. Likeable main characters , with interesting back stories and good police proceedure . No gratuitous sex.violence or crazed corrupt senior officers , whch seems almost mandatory in many crime stories . However, the sudden ending and all the unfinished bits and bobs , was an obvious ploy to leave readers wanting more.Next stop, order number 2 and hope there is a number 4 in the pipe line.
Read more
20 people found this helpful
Report abuse
See all reviews