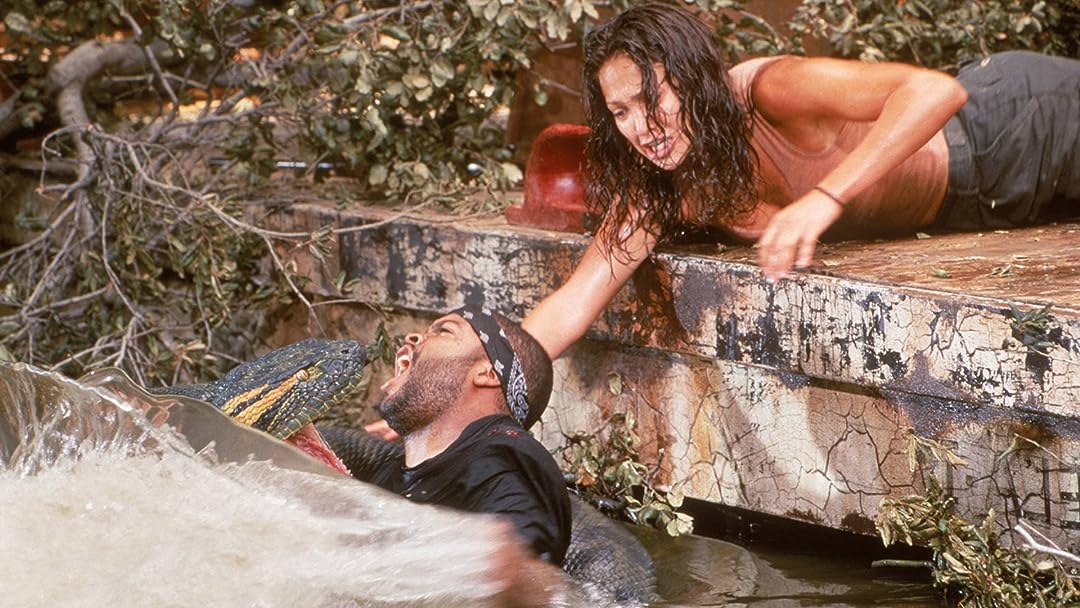 Leaves Prime in 4 daysRentals include 30 days to start watching this video and 48 hours to finish once started.

joel wingReviewed in the United States on July 28, 2020
2.0 out of 5 stars
Didn't buy the snake so didn't like the movie
Verified purchase
An expedition into the Amazon to film a tribe in the jungle gets attacked by a giant anaconda snake. That’s the basis of the film Anaconda.

The movie begins by setting the mood. They’re travelling up the Amazon River and a variety odd events befall them. They pick up a man stranded in the jungle named Paul Serone (Jon Voight) who appears to have his own agenda. The lead scientist Dr. Steven Cale (Eric Stolz) is stung by a poisonous bug. They run into a giant dam in the river. They blow it up and snakes come raining down on them in the debris, foreshadowing for what they will run into.

The problem with the film is that you can tell what Serone is going to do and the anaconda itself is just not that well done. It’s no use watching a movie like this when it’s predictable and the beast just isn’t appealing. On top of that it gets unbelievable like when the snake gets shot multiple times but doesn’t die.
C

James C GirasaReviewed in the United States on November 9, 2018
4.0 out of 5 stars
One of the best giant snake movies
Verified purchase
This review is for the Blu-Ray edition of 'Anaconda' released in 2014 by Mill Creek Entertainment.

PLOT/SUMMARY: The movie opens with a poacher being killed by a giant anaconda somewhere in the Amazon. A filmmaker, Terri Flores (Jennifer Lopez), and her crew are on the amazon shooting a documentary about an
Indigenous tribe. The tribe is believed to be lost and they are hunting for it. While searching they come across a snake hunter, Paul(Jon Voight), who is stranded. They take him aboard because he claims to know where the lost tribe is. While on the boat, the lead anthropologist, Steven (Eric Stoltz) gets stung and his life is saved by Paul. Steven is now incapacitated. Paul's true objective is to find and capture the giant anaconda. They come across the boat of the dead poacher and one of the crew is killed by an unseen snake. They find out that Paul is a poacher. Nobody trusts Paul but they come to an agreement. He will help them if they help him too. An unsteady truce is temporarily made. The giant anaconda attacks and everything falls apart.

PRODUCTION/COMMENTS:
-This movie was released in 1997 and distributed by Columbia Pictures. Despite being panned by a lot of critics 'Anaconda' was a commercial hit and has spawned numerous sequels and copycats. It effectively helped create a whole genre of films.
-To date(as of October, 2018) this movie has spawned 3 sequels. They all have much lower budgets than this one. That doesn't included the 'Lake Placid' crossover. That would make it a fifth sequel.
-The acting is decent. Especially that of Jon Voight. Of course he is known for being a good actor.
-My favorite scene was that of the Anaconda grabbing the guy who was falling out of mid air. This was ultra cool!
-I liked Jon Voight's character. It's a pity he had to go.

RECOMMENDATIONS/CONCLUSIONS: I'm giving this release 4 stars. If you compared this to all science fiction/monster
movies in general I might give it a lower score. But if you compared it to it's competition in the genre, then I would give it 5 stars.
A lot of people call this a bad movie or one that is so bad that it's good. I disagree. I think the acting was good and the special effects were good for the time period. Another movie along these lines that was panned that I thought was pretty good is 'Lake Placid'.
If you are into giant reptile, snake, shark, etc. movies then you will probably like this movie. This was not a low budget movie so it has much better production values than your typical movie in this genre. That said, if you don't think this movie is any good then don't waste your time on any of the many SyFy original movies along with quite a few other genre movies in this category.

Recommended for all fans of the genre. This is really the one that kicked it off movies of this type.

mommy1Reviewed in the United States on May 27, 2019
4.0 out of 5 stars
Great snake horror movie.
Verified purchase
Horror movies are not my thing, but this movie I can tolerate. It is just enough horror to not bother me. Ever since Jaws I love to watch big animals and humans interact. I know the die hard horror movie fan probably hates this movie, but the cast is fun and the setting of the Amazon River is pretty cool. Just a fun movie to watch when you're bored on a summer day.
3 people found this helpful

MaiReviewed in the United States on April 21, 2021
5.0 out of 5 stars
Good movie
Verified purchase
Loved this movie. Jennifer Lopez looked totally different back then! She looked like Garcelle Bouvais (probably misspelled) The woman that played Jaime Foxx's girlfriend on the Jaime Fox show yrs. ago. Anyway the ...the movie was good!
One person found this helpful

Amazon CustomerReviewed in the United States on December 4, 2016
5.0 out of 5 stars
Jon Voight's accent saves the film
Verified purchase
A masterpiece of genre satire. Anaconda, posing as a blatantly bad 90s action flick, ripples with political commentary strewn through the movie. As a metaphor for everything from the Vietnam War to childhood obesity, this film shines. Jon Voight was snubbed from an Oscar nomination for his portrayal of a (maybe South American idk) amazon snake hunter. His performance leaves nothing to be desired. 5 stars. Ice Cube does all the music in the film a cappella
15 people found this helpful

CactusCoolerReviewed in the United States on August 26, 2018
3.0 out of 5 stars
Great campy fun... but this blu ray literally only has the movie
Verified purchase
You either love or hate the movie.

However, the blu ray literally only contains the movie. No special features and ABSOULTELY NO AUDIO/VISUAL OPTIONS. NOT EVEN SUBTITLES IN ANY LANGUAGE.
4 people found this helpful

David J.Reviewed in the United States on September 4, 2020
5.0 out of 5 stars
Scary and fun action flick
Verified purchase
I remember seeing this in theaters back in 1997 as a 10 year old. I had a lot of fun then and almost 25 years later it still holds up well. Silly but very fun.
One person found this helpful

AdamReviewed in the United States on October 16, 2021
4.0 out of 5 stars
Good spook movie for the people who are afraid of snakes.
Verified purchase
I liked the Action packed Movie with great cast. I saw this in the theater when it originally came out. The visual technigues makes this creature more life-like. Ice Cube is tough as ever. I'd recommend this movie.
See all reviews
Back to top
Get to Know Us
Make Money with Us
Amazon Payment Products
Let Us Help You
EnglishChoose a language for shopping. United StatesChoose a country/region for shopping.
© 1996-2021, Amazon.com, Inc. or its affiliates